A peculiar view of the Eternal City, from Castel Sant'Angelo

What to see? Which is the best place where to have a one-of-a-kind view of the city? Experts suggest you to watch it from Castel Sant'Angelo terrace. Not far from the Vatican, the roof of this historical monument actually offers a spectacular and romantic panorama. Many tour operators suggest you this step, especially for a trip with your partner, to find some quiet moments together. Dipped in the nature, in one of the richest places of the city, you will get hugged by the perfumes and the colours of Rome, for a one-of-a-kind experience. The capital of Italy couldn't be more beautiful than this. The terrace of Castel Sant'Angelo seems to be the best place to reflect or to spend some time alone, and find peace.

What to see in Rome: Castel Sant'Angelo
Before getting to the wonderful terrace of the angel, you have to visit this monument, protagonist of Rome history for almost 2000 years. Castel Sant'Angelo was built in 123 AD, at the beginning as a simple support care for Emperor Hadrian. During the following years it got modified, according to its uses. For example, it was a fortified outpost, a prison, but also a Renaissance residence, to finally become a wonderful museum. Its walls can actually tell many stories, and testify what happened in the past. From the basements to the lodges, from the stairs to the courts, feel the luxury rooms, every single architectural element, every room has its own history. Visiting Castel Sant'Angelo, you will walk through the execution court, after which you will be able to admire the historical presence of the time. The visit to the chapel of the SS. Cosma and Damiano will be your next fundamental step, as well as “Amore e Psiche” room, if you visit it with your partner. 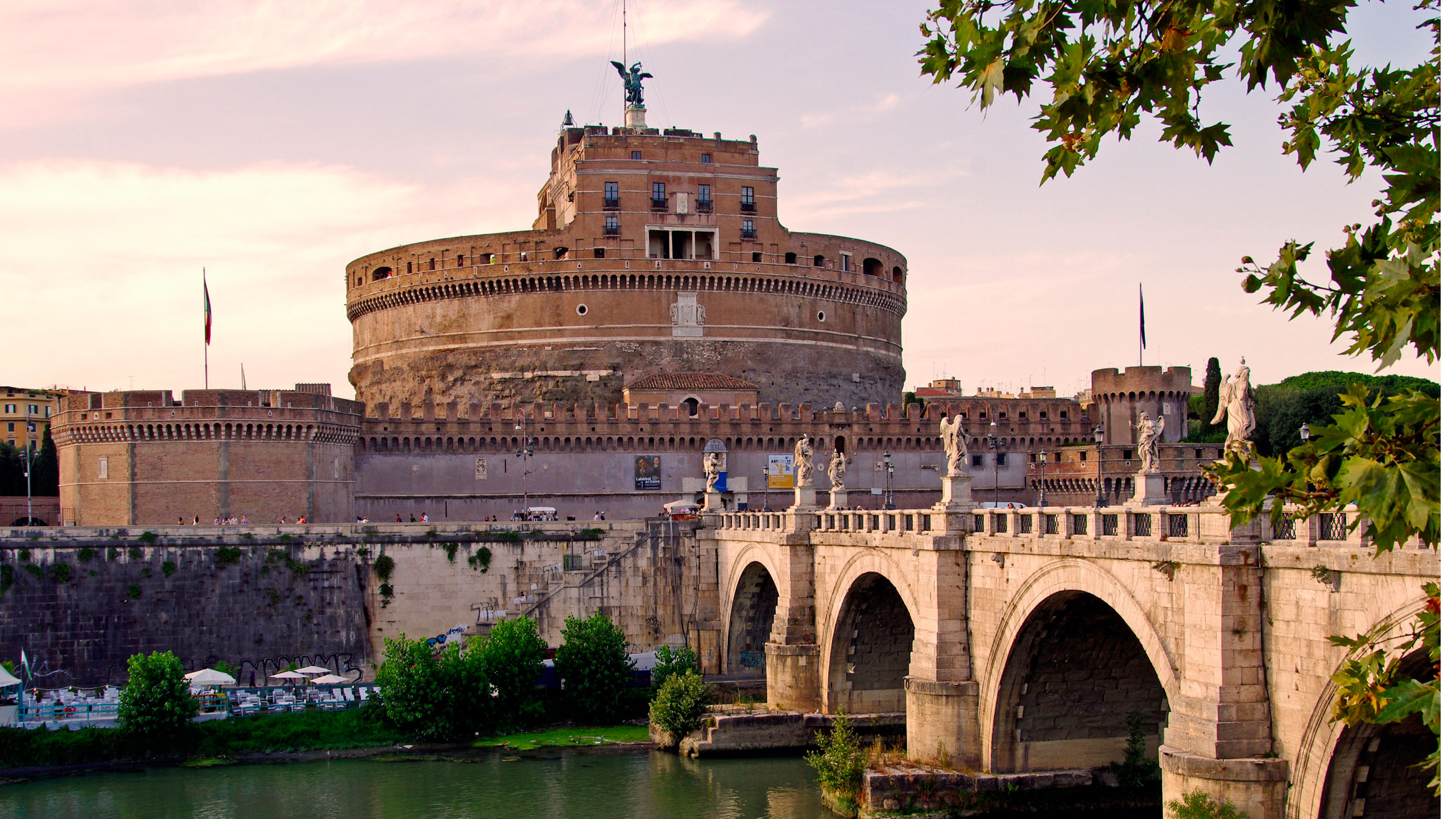 Castel Sant'Angelo: the origin of its name
We suppose its name comes from a miraculous vision that took place during the plague in 590. During a manifestation, Pope Gregorio Magno saw an angel putting the sword back, and he interpreted it as the end of the plague. For this reason, a wooden statue was put on the terrace. It was replaced by many versions, firstly made of marble and then of bronze. As well as Castel Sant'Angelo, even the statue underwent numerous transformations over the time.

The terrace of the angel: some features
Your tour could be concluded at best on the roof. The view will leave you speechless, especially at sunset. Before observing Rome, however, you should dedicate your attention to the bronze statue of the angel, symbol of the whole building. Together with the Condemned Bell, that statue makes the atmosphere of the terrace even more peculiar. The bell doesn't sound anymore, but in the past it used to announce the executions taking place in the court. That's what Giacomo Puccini told in his Tosca, on Castel Sant'Angelo background. In the drama, Tosca actually jumped down after the execution of his loved Cavaradossi, committing suicide because she couldn't live without him.

The terrace of Castel Sant'Angelo: the transformations of the Angel statute
The first wooden statue got broken because of use. The second one made of marble, was destroyed during an attack in 1379. In 1453, a new statue it was set on the roof. The angel was made of marble, but its wings were made of bronze. In 1497, a lightening destroyed the statue, so they decided to make a new one or golden guns, but the angel got melted to build cannons, in 1527. The following statue was made of marble and bronze wings, by Raffaello da Montelupo, currently set in the Cortile dell'Angelo. The current statue was made in 1753, by Peter Anton von Verschaffelt, and then restored about 30 years ago.

How to get to the roof of Castel Sant'Angelo
How can you get to the roof of the Castle? Well, not seeing it is impossible. The monument is situated on the right bank of the Tiber, in front of Sant'Angelo Bridge, in Borgo Pio District. The castle is connected to the nearest Vatican City, by the fortified corridor restored and opened to the public in 2000, during the Jubilee. Visiting the entire castle and discovering its history, you can get to the roof and get astonished by a spectacular panorama. On sunny days, when the sky is completely here, you can admire the whole city from a very peculiar point of you. Maybe, couples of lovers could decide to consecrate they love, after the magic and suggestive atmosphere of the place.
You can reach the castle by underground A. We suggest you to get off at Lepanto or Ottaviano-San Pietro.
If you prefer to go by bus, you can get there by number 62, 23, 271, 982, 280, getting off at Piazza Pia stop. Line 34 stops at via di Porta Castello, rail lines 49, 87, 926, and 919 stop at Piazza Cavour or Via Crescenzio.
You can visit the castle every day from 9 a.m. to 7:30 p.m., but the ticket office closes at 6:30 p.m.
The full price ticket is €10, the reduction is €5. Reservation is advised for groups of more than 20 people.