A trip to discover one of the most beautiful villages in Italy: Subiaco

If you are spending a few days in Rome, we suggest you make a little detour and visit Subiaco. The town, considered one of the most beautiful villages in Italy, is located less than 70 km from the capital, and it is easily accessible.
There are many places you can visit, but we are sure you will not regret this change of plan. Here you are some information about it.

Visiting the old town
Your tour has to start from the historical centre of this charming medieval village.
The first stop is Piazza Sant'Andrea, where the main city streets cross themselves.
There you can see the Basilica di Sant'Andrea Apostolo: the building was built on a previous church, and it is characterized by a Neo-classic style. After the bombings in 1944, several renovation works have taken place, visible in its nowadays beautiful version.
If you go on along Via Cavour, you will have to step in Via degli Opifici: it is a typical mediaeval street, going to the ancient factories along the river Aniene.
Then, take Viale Petrarca and go up the Via del Torrione steps; here you are in front of St Peter's church.
Its bell tower, dating back to the 11th century, is the first example of Romanesque architecture in the region of Lazio, and it is the only element survived during World War II. After Via Palestro, you will pass under a little arch, too reach Piazzetta Pietra Sprecata: this place is peculiar because of its gothic vault and the aedicule hosting the holy Mary, dating back the 18th century.
The next stop is Piazza Santa Maria della Valle, located at the foot of the Rocca Abbaziale, and it represents one of the most famous one in Subiaco; in the square, there is the church with the same name, dating back to 1798.
Your walk in the historical centre ends at the Rocca dei Borgia; the complex was built in the 11th century by John V, Abbot of Saint Scholastica. The fortress includes several areas used as prisons, fortifications, a tower and a small church dedicated to St Thomas the apostle.
La Rocca dei Borgia was damaged by an earthquake in 1349, and suffered several attacks by the local population; about a century later, Cardinal Rodrigo Borgia supervised its re-qualification. Inside the building, you can observe many priceless historical and artistic works; if the weather is good, you can visit the Museo delle Attività Cartarie e della Stampa.

A walk surrounded by the nature
Nature lovers can't miss to enjoy some of the most beautiful walks these places offer.
Go to San Benedetto Lake: it is surrounded by several different types of plants, such as hopeless and sallows. As you can see, there is also a tiny waterfall because the waters of the Aniene river flow into the lake. The way of St Benedict is perfect if you like long walks. The route runs through 300 km away, reaching Norcia, Subiaco and Montecassino. These places were very important for Saint Benedetto: the first one is the place where he was born, the second one is where he lived for 30 years, and the last one is where his life ended.
The route includes 16 different stops, and several accommodations.
Monte Livata, for example, is perfect if you want to relax yourself. The panorama is really wonderful, and the lawns, in the beautiful season, become colorful carpets; you could even meet some typical animals of the area. 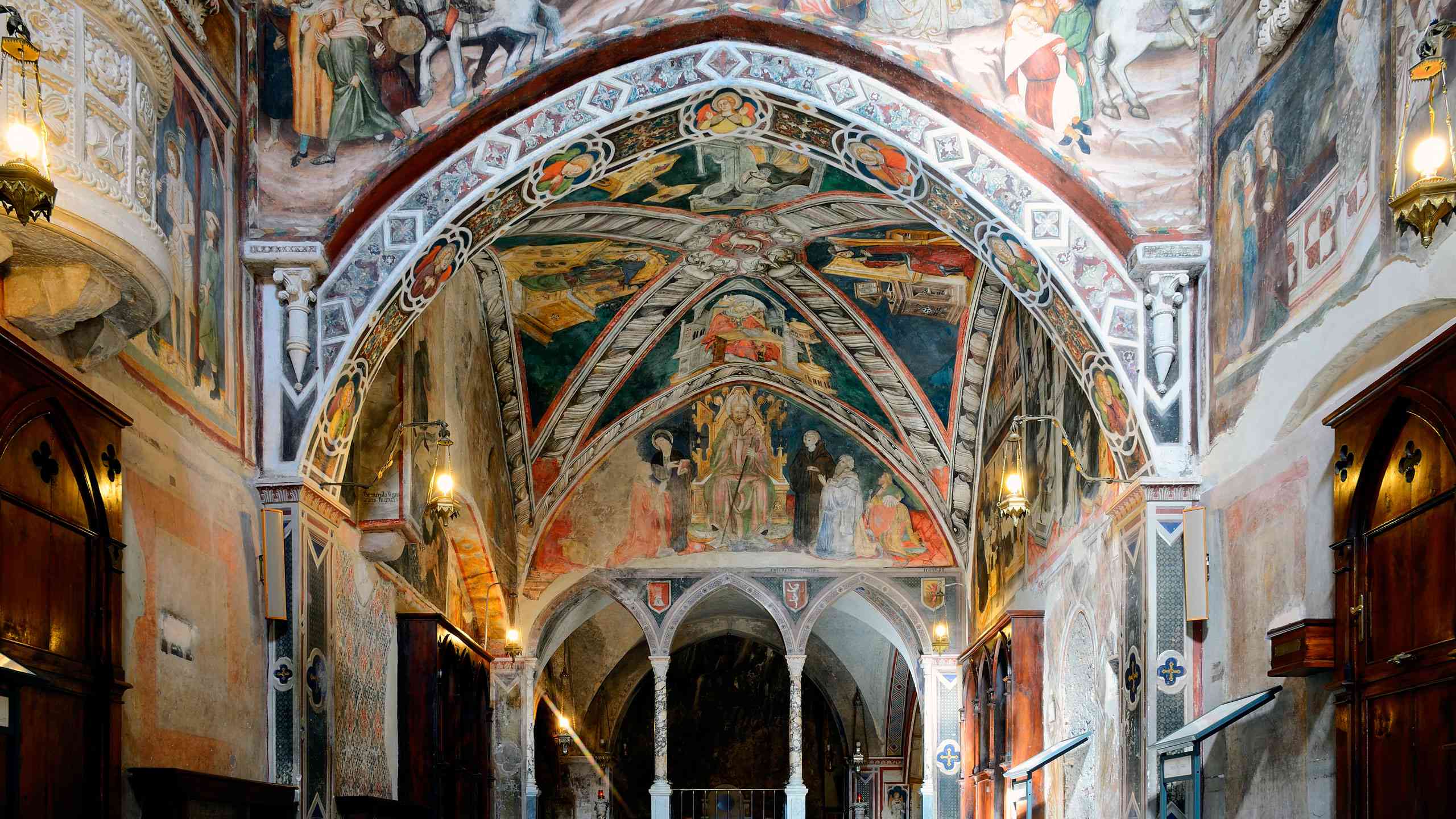 Nero's residence
You can't miss to visit those residence: the emperor with the same name ordered its built in 60AD. It is situated in the area of Taleo and Francolano mountains, near the river Aniene, on a 75 hectares surface, 15 more than Villa Adriana in Tivoli. It is the favourite house of narrow, but he decided to abandon it after a lightning had hit it during a party.
On Via Sublacense, near Sorricella and the monastery of Santa Scolastica, you will find its remains.

The sanctuary of Sacro Speco
The monastery of San Benedetto stands on the rock face of Mount Taleo, and is supported by nine high arches.
The complex is located near the Sacro Speco, the cave where the young St Benedetto da Norcia lived: he spent his life alone there, and after some years, he founded the first monastery community along the river Aniene.
Today the monastery is made of two churches and several chapels following the shape of the rock around them.
Inside of it, you can admire wonderful frescoes representing Byzantine icons from the 80s century, and some paintings dating back the third century. There are also works by painters from Umbria and Tuscany; the main attraction is, however, the portrait of Saint Francesco d'Assisi; he lived in the monastery for 2 years, from 1223. Finally, the statue of San Benedetto by Antonio Raggi is worth of a visit.

If you fell in love with Rome, you should know Subiaco really deserves a visit too. This village is considered one of the most beautiful of the peninsula, as it has a wonderful historical and cultural heritage, but also a wonderful natural panorama where to spend a day working surrounded by a breathtaking nature.