Castel Sant'Angelo, known also as Mausoleo di Adriano, is one of the most famous monuments of the Italian capital, on the right Tiber bank, not far from Aelius bridge. The castel is in the middle of Rione Borgo, not far from the Vatican, that is connected to it by a passage, called passetto.
During the medieval and Renaissance times, the fortress was restored many times and its plant modified, so that what you see nowadays is the result of many modifications, completely changed its original use.
The castle is currently property of the Ministero dei beni culturali and it is part of the Polo Museale della Regione Lazio, from December 2014.

Historical background
The beauty of the area is connected to centuries of history and events changed its use and original appearance. It was invented by Emperor Adriano, because he wanted a funeral mausoleum could offer a great visual impact.
Taking inspiration from Mausoleo di Augusto, the building was finished just in 139 by Emperor Antonino Pio. It was built in front of Campo Marzio, and connected to it by the addicted bridge, Ponte Elio.
The entrance is great, completely covered by yellow marble, and the mound on it is full of trees, decorated by a big bronze quadrille, led by Emperor Adriano, represented as the Sun King.
Castel Sant'Angelo got its current name when Rome suffered a terrible plague, in 590. Pope Gregorio I joined a solemn parade, to save the city. Once in front of the mausoleum, the Pope had a vision showing the Archangel Michele putting up his sword. He interpreted the vision as a good sign, so from that moment on, Roman people started to name the building Castel Sant’Angelo. It lately became the Pope’s residence, fortress and prison, changed time by time, according to the new purpose. The guarding angels have been built many times, the last one was in 1753, when the bronze angel by Peter Anton von Verschaffelt was put there, lately restored in 1983-1986.

The museum
The changes created three different types of architecture in just one monument, however you can distinguish them very well. On the lower level there is the mausoleum and its remains: the entrance, the dromos, the helicoidal stairs and the urns room. The way has been restyled and it is very similar to the original one.
The majority of the external fortifications were made between the IV and the XVII century, except for some parts, restyled during the half of 1900s. You can still walk along the path through the bastions named to the four evangelists; over the court of the Angel and Leone X’s Chapel there are the Renaissance rooms, the most sumptuous and well saved. Some examples are the apartments of Paolo III Farnese, the lodge and the rooms decorated by frescos y Perin del Vaga. Over them, there is the Sala del Tesoro – probably Adrian’s tomb), the library, the Sala dei festoni and the Cagliostra, lately moved into a prison. On the top, there are some archives and the Sala rotunda, from which you can see a breathtaking panorama, on the Terrazza dell’Angelo.
There are many temporary and permanent exhibitions in loco, usually focused on the story, the events, the struggles and the art connected to this fascinating place.
Lots of theatre and music show take place there, making it an artistic pole very important in the museum economy of Rome. 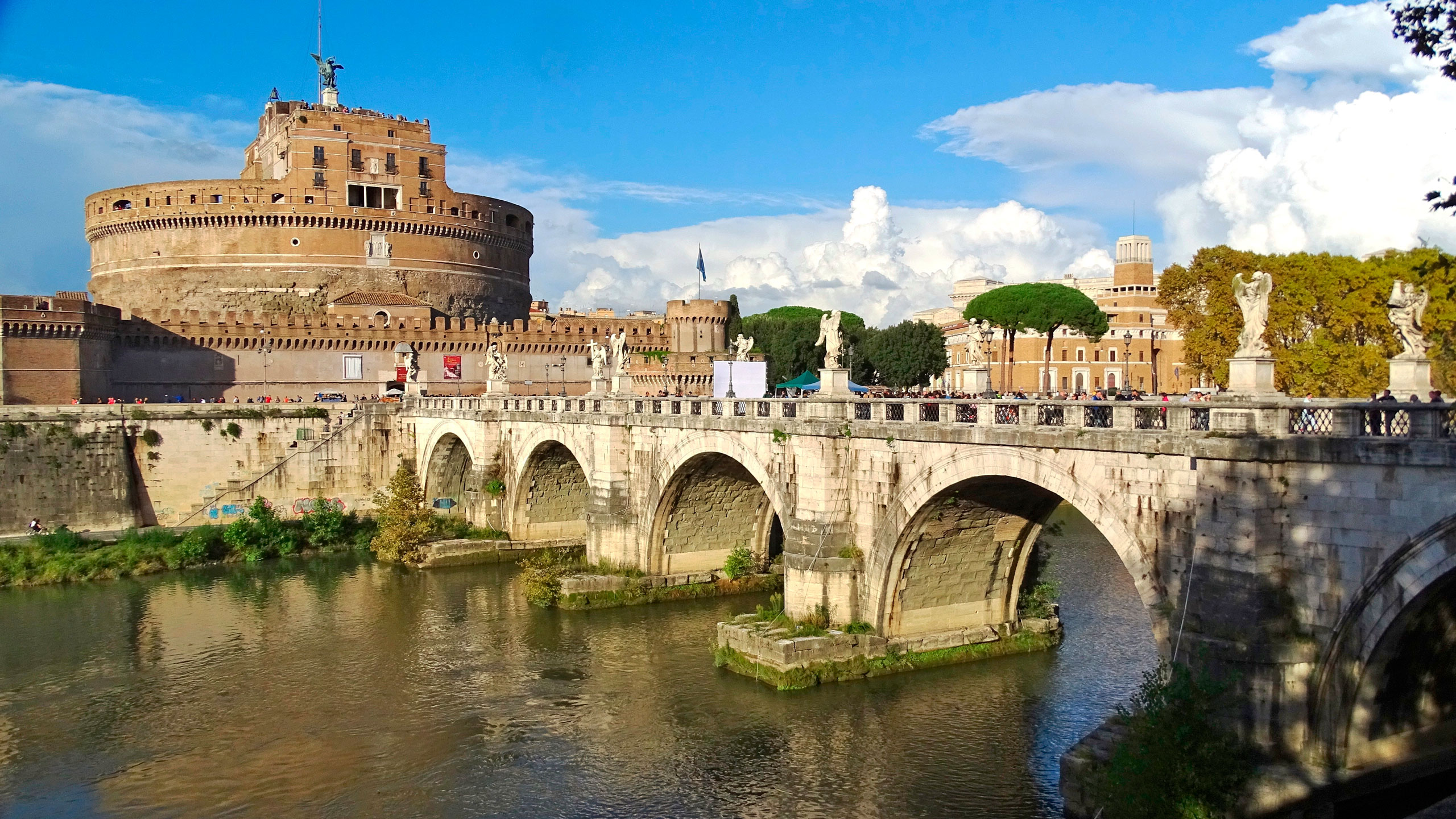 “Sere d’Arte”, the show in Castel Sant’Angelo
During the hot nights, Castel Sant’Angelo opens its gates to the citizens and to the tourists. From Tuesday to Sunday, you can join interesting guided tours, in Italian and English, for free.
The background of these tours is made of the most beautiful places of the building, such as the Cagliostra, moved into a luxury prison for famous prisoners. Its name is not a casualty, but it derives from the name of one of the most famous prisoners: the Conte di Cagliostro. The wonderful frescos are by Luzio Luzi. During the guided tours, you can walk along the path connecting the castle to the Vatican buildings, on the walls. Another suggestive step is the stop at the historical prisons, used from the Renaissance till the 1800s, where famous people such as Pope Paolo III Farnese, Pomponio Leto, Giuseppe Balsamo (the Conte di Cagliostro) and Benvenuto Cellini were imprisoned.
One of the most appreciated jewel is the Sala da bagno of the popes, from 1500s. At the end of the tours, Castel Sant’Angelo offers theatre shows and classic, lyric and jazz concerts.
Events go on for all the summer, in the court of Alessandro VI and in the Bastione di San Matteo. Famous artists exhibit there, such as Lius Bacalov, Gloria Campaner, Giorgio Albertazzi, Paolo Fresu and Daniele Di Bonaventura, Grabriele Mirabassi and Roberto Taufic, Francesca Dego and Francesca Leonardi, Fabrizio Bosso and Julian Oliver Mazzariello, Danilo Rea, Anat Cohen and Marcello Goncalves, Luciano Biondini and many others.
Some actors played there were Luigi Lo Cascio, Maurizio De Giovanni, Roberto Latini, Michele Murgia, StefanoBenni and Marco Mavaldi.
You can’t miss the events in Castel Sant’Angelo!