Back in time, walking along the Appia Antica

Have you ever heard about the ancient via Appia? In Rome there is the Parco Regionale Appia Antica, not far from the city centre, but anyway situated in a dimension over the time in the heart of the wonderful Roman countryside.

Historical information
You have to know Via Appia is the only one street taking its name by its creator, Appio Claudio, the one who built also the Roman aqueduct. The censor ordered its built in 312 b.C., to represent the greatness of Rome. At the beginning, the street arrived to Capua only, and it was prolonged until Taranto and Brindisi just later on, where a refined column - originally there were two of them - represents the end of the street called "regina viarium".

You can walk along the Appia Antica by feet or by bike: the first thing you will see is the street made of giant volcanic basaltic rocks; in some parts - more recent - these stones have been replaced by the famous "sampietrini".

Observing the numerous sepulchers on the side of the street, the area could give you the impression of being macabre: the explanation of this phenomenon, is that rich families used to bury dead people at the open-air for hygienic reasons. But the reputation of the road is also connected to a very sad event dating back to 71 b.c., when the Romans captured Spartacus and 6000 rebel slaves, crucifying all of them along Via Appia, till Capua, in order everybody could see which destiny they had to expect if they rebelled against the power of Rome.

To not forget
Start the Appia tour from the monumental Porta di San Sebastiano: there you can visit the Museo delle Mura, where you will discover the story of the Roman fortifications, especially the "mura aureliane", passing through the ancient, mediaeval and modern sections.
The first construction you will see between Appia Antica and the Parco delle Caffarelle is the Chiesa del Domine Quo Vadis, originally from the 9th century: its name comes from an event told by the Christian religion, telling that Jesus Christ appeared to Peter, who asked him "Domine, quo vadis?", and Jesus answered "I'm coming back to Rome to be crucified for a second time", inviting Peter to come back to Rome and say Nero persecution. Inside of it you will have the possibility to admire the copy of a stone on which you can see what is supposed to be the prints of Christ feet.

Before going on along Via Appia, we suggest you to stop at the Fosse Ardeatine in Via Ardeatina: a travertine sculpture representing three people will welcome you. It is a memorial for 335 innocent people killed by the German soldiers on March 1944, to prevent the 33 soldiers killed by the "partigiani". You will reach the Sacrario, where the Massacre took place. 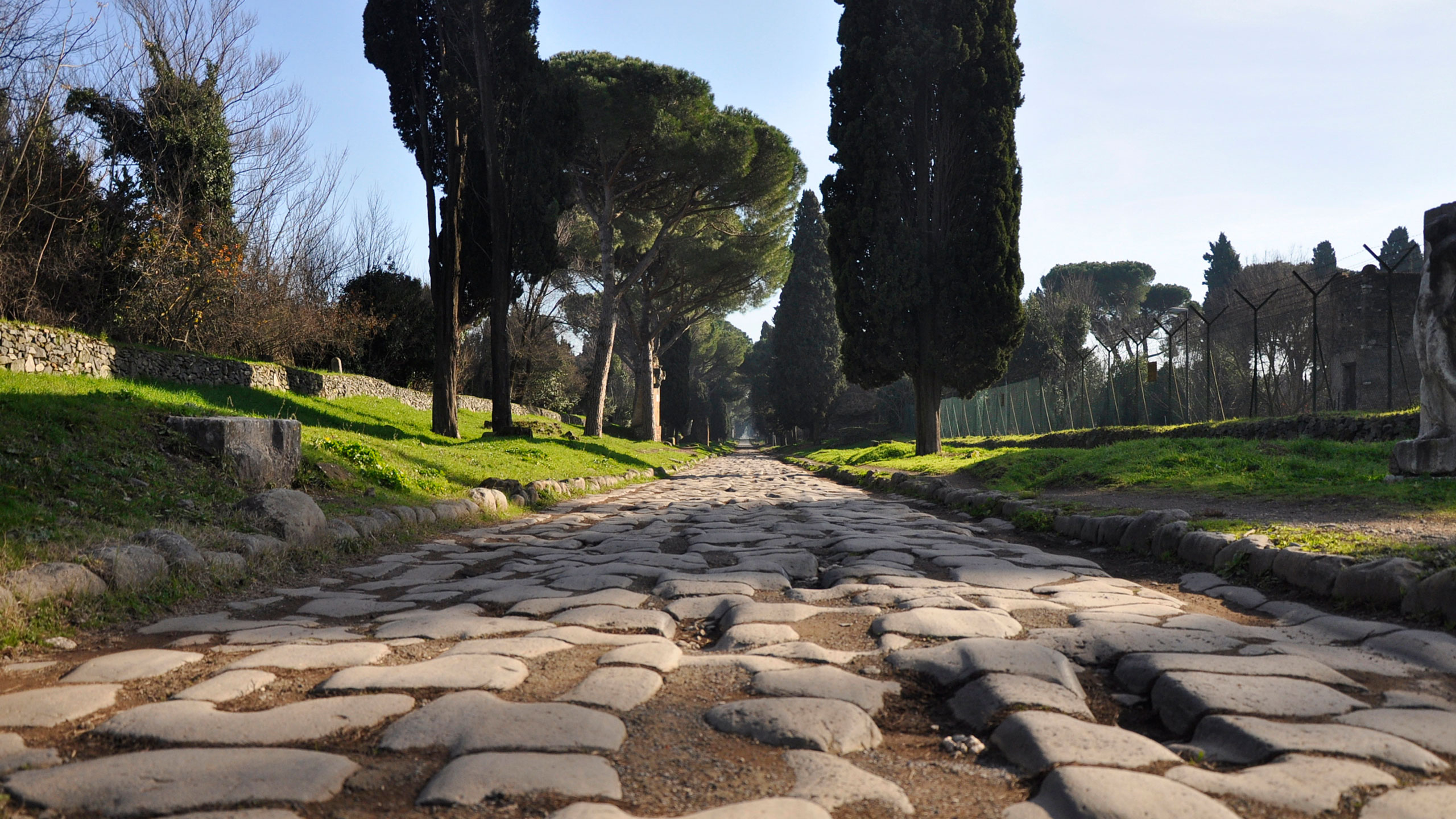 The mysterious Catacombs
Going back to Via Appia Antica, you will see the signals to San Callisto Catacombs, extended for almost 20 kilometres: you will discover an incredible underground world, among galleries, recesses and an ossuary. Through the Cripta dei Papi, you will arrive in front of the suggested statue of Santa Cecilia, representing the sword cut on the neck, remembering her sarcophagus from 821: you will be surrounded by frescoes and paintings of the 5th and 6th century, with a beautiful picture of Santa Cecilia praying.

Later you will see the Basilica di San Sebastiano, dedicated to the French saint victim of Diocleziano persecutions, where it is said there are the rests of Paolo and Pietro: and the church and go down the enormous catacombs of San Sebastiano, from the first century a.d. Going on through the ancient history of Via Appia Antica, go over there rests of Villa Massenzio and its private Circus - once theatre of horse races - and you will arrive in front of the mausoleum of Cecilia Metella, daughter of the consul Quinto Metello Cretico, the Man Who Conquered Crete.

It is situated in the heart of Capo di Bove, and it is a cylindrical structure - once hosting the Roman matron’s body - of which you can still see the travertine she's still partly covering it, and the marble decorations. The structure around the elegant tomb was added in the 14th century by the Caetani’s family, during the built of a castle, surrounded by decorated towers, double windows, and a little church inside the walls: in the castrum you can visit the Museo dell'Appia, rich in inscriptions, statues, and sarcophaguses from Via Appia Antica itself.

Some sepulchers along Via Appia Antica
From this point on, surrounded by the trees, you will see many sepulchers and tombs, decorated by inscriptions you can still see sometimes. According to the Roman tradition, the inscriptions have to be read out loud, as if they were pronounced by the dead one: observed the epigraph on Marco Servilio’s tomb and the one - written in verses - of the Tempio dei Figli di Pompeo Giusto.

There is an unknown tomb also, similar to a little temple, and you will recognize it by the stairs. You we'll see the Sepolcro dei Festoni e del Frontespizio, from the first century b.c., buy the decorated aedicule, made of four busts. Near the mausoleum rests - similar to a short pyramid - there are the times of Curiazi and Orazi, and then the Villa dei Quintili, surrounded by the bright green: even if you can only see the remains, you can have an idea of the majesty this house had, thanks also to its thermal baths. The residence belonged to the consuls Condino and Massimo, but the emperor Commodo got so offended by their ostentation, to confiscate it, together with all the goods in it, before condemning them to death.

Once you reach the V mile, you will see the biggest sepulcher of Via Appia Antica: the Mausoleo di Casal Rotondo, property of the consul Messalla Corvino. On the top of the Augustan tomb, they built a house with a garden, during the middle ages.