Castello Odescalchi: a pearl in the Bracciano lake framwork

All the people visiting Rome surely have the intention to visit all the beauties of the eternal city.
Yes, as the Italian capital doesn't need any presentation or suggestions about what to visit, it would appear superfluous as you just have to choose among monuments, museums, churches, and unmissable places.

The only one suggestion we offer you is the interesting trip will make wonderful your stay in Rome.
The destination we are talking about is the Castello Orsini-Odescalchi, on the Bracciano lake, in the little city that gives the name to the lake, a few kilometres from Rome. 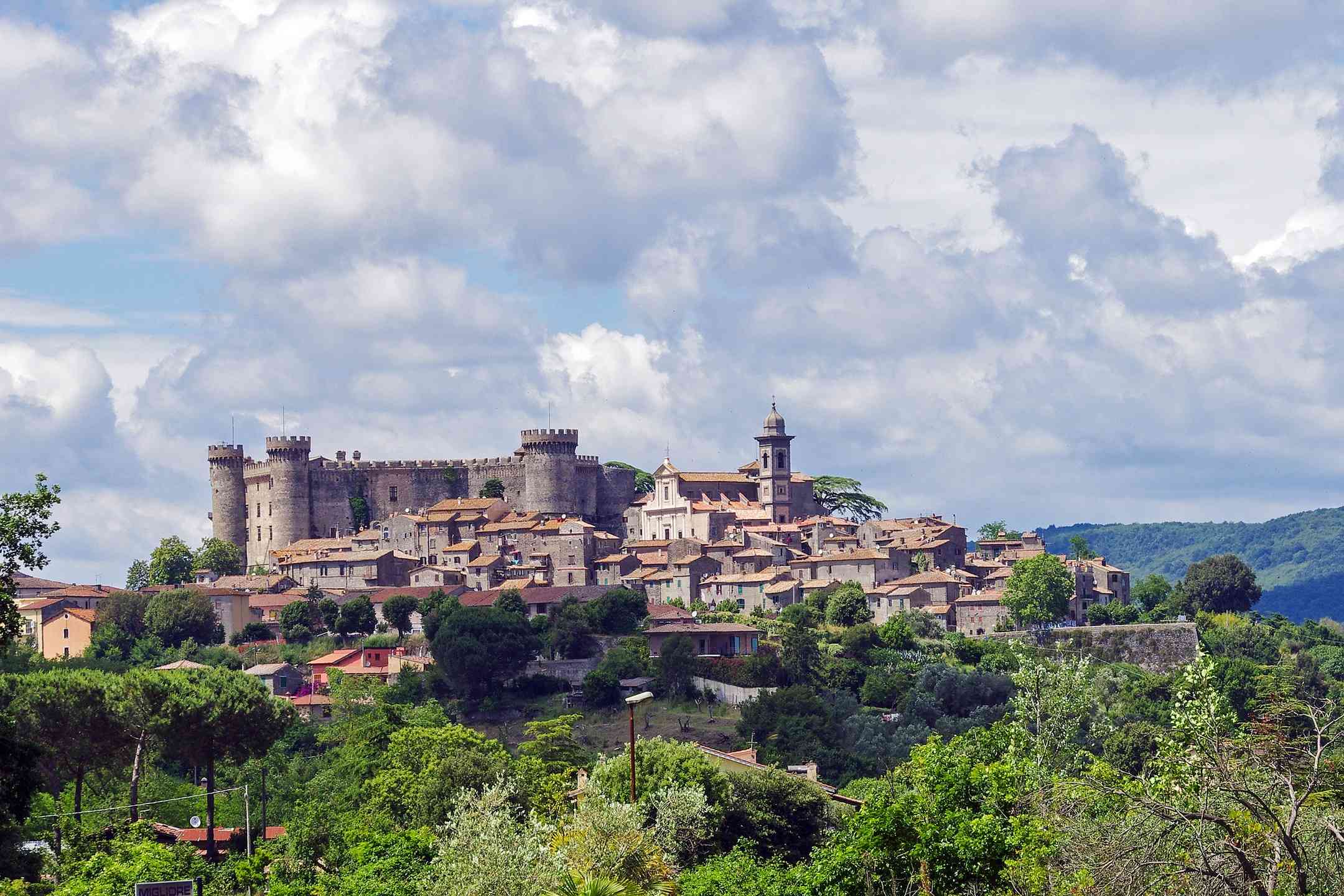 A little bit of history
Well-known as Castello di Bracciano, it dates back to the 15th century and it is still beautiful as it originally was. It has a pentagonal shape, made of three strong walls with five towers - one for each external vertex; it was built because of Braccio's will, and it became Orsini's property, by Pope Martino V, in 1418.
We can define the castle as an example of a military building, developed between the Middle Ages and the Renaissance.
You should know the first sources about it date back to the beginning of the 13th century, when it was a high fortress of Prefetti di Vico, dominating the surrounding area. An Orsini's member modified the castle a few centuries later, as you can see it nowadays, ordering the implementation of two four-sided structures connected by one of their vertex. Also the walls were modified to protect the area and the little city; you could reach just by two protected entrances, by a drawbridge.
From being just a military fortress, the building has got to be a more pacific and attended Renaissance court, by the time, hosting cultural events and parties.

It is currently surrounded by scenographic vines and towers, once used to protect it. Embellished by frescoes and antique furniture, it is now considered an historical fortified residence among the most elegant ones in our country.
The Odescalchi's replaced the Orsini's at the end of the 15th century, getting more prestige when one of them became Pope Innocenzo XI.

What to see there
If you decide to visit the castle in Bracciano, you will be able to visit the 1500s arch by Jacopo del Duca, introducing the avenue in the castle gardens.
There are many buildings in the area, such as the granary-stable - built after the castle - and the armoury.
Once in the main building, you will get astonished by the Sala Papalina in the northern tower: not only because it hosted Pope Sisto IV, but overall because its roof was decorated by the Zuccari's brothers at the half of the 16th century, in occasion of Paolo Orsini and Isabella de' Medici's marriage.
The panelled ceiling in the Sala Umberto I°, by Antoniazzo Romano school, is very interesting, enhancing the pieces of furniture of the 15th century and their 1500s decorations.
After the Sala del Trittico - where you can see an altar work from the 16th century, partly by Antoniazzo Romano representing the Announciation - you reach the Sala del Pisanello, characterised by walls decorated by Odescalchi's portraits from the 17th century, by the Flemish school. In this space, you can also admire a portion of a remarkable collection of ceramics by the best Italian artisans.
The great fresco in the Sala dei Cesari, telling the story of Virginio Orsini and his troops, towards Bracciano, to meet Piero de' Medici, is by Antoniazzo Romano, too.
After the Sala Orsini, you get into Sala Isabella - also called Sala Rossa - where there is a Venice school bed, stored from 1500s.
The visit at the Castello di Bracciano ends by the Sala Gotica, the Sala delle Armi and the Sala d'Ercole.
There are Odescalchi's portraits on the walls, but also armies from the 1400s, 1500s and 1600s, among which there is a wonderful armor dating back to the 15th century. The towers are impressive, connected by the passage where there are lodges, stairs and areas for the soldiers, to protect the castle.
There are four great fireplaces of the ancient kitchens, where you can still see the ancient copper pans, and the censer used to print the property.

The Castello di Bracciano nowadays
The Castello Odescalchi is famous nowadays for the special events it hosts - usually weddings. Many famous people chose it to celebrate their marriage, in an elegant and rich in different atmosphere area.
The beautiful external areas and the precious living rooms create a special atmosphere where to originally host important dinners, meetings, fashion parades, or a wedding party. The Castello Odescalchi is one of the most beautiful Renaissance and well preserved buildings in Europe.
Everybody will like a tour there, for the mix of art it offers.
It will seem to be on a trip in the past, surrounded by knights and ladies, walking around the Secret Garden, wher to take advantage of a great view on the lake.