Eating out in Rome: Rome, the capital of the Street food!

You have surely heard about the "street food" recently, haven't you? It is the new trend from the United States, now very common with its tasty fast food. But we can't say it is an invention: street food has always been part of the typical Italian culture, and Rome offers hundreds of examples from the ancient and recent tradition. That's why we can call Rome the capital of street food!

Street food in Rome
As we said, in Rome, you can find many examples of street food, so that we can say it is a peculiarity of the Italian capital.
In addition to the extraordinary beauties characterizing the Eternal City, during the tours and your walks around the city, taking advantage of history pills in any corner of the city, you can taste some typical Roman food in a very easy and fast way at the open air. In every district of the city, you will be able to taste several typical foods, from the local products to hundreds of different varieties.
We are talking about a so wide offer, Rome is the best in the world. Here you are some examples of the unmissable foods you have to taste.

The Roman pizza
Not less famous than the Neapolitan Pizza, in Rome, street food means pizza. Everywhere in the city centre you will find "pizzerie" where to have a fast snack, where you will discover an incredible variety of flavours and perfumes. The famous "scrocchiarella" is crispy but soft, and you can fill it in with anything you want. We can't forget the "pinsa", a peculiar type of pizza from a very ancient tradition, characterized by a very light dough, available in several different types.
Among the unmissable places you have to visit if you like pizza, you can find the bakery in Campo de' Fiori, where you can taste one of the most famous food in Rome: "pizza bianca e mortazza" - white pizza served with mortadella. We are obviously talking about the wonderful mix of mortadella from Bologna and mozzarella cheese that is one of the most famous snacks of the Eternal City.
If you want to experiment a mix of ancient and new tradition, without renouncing to the street food, you can try the "trapizzino": it is a triangle of pizza bended and filled in with typical Roman ingredients, such as oxtail, Grandma's meatballs, offal and much more.
An unmissable place you have to visit to taste this type of snack is Trapizzino, the famous place where you can taste the "trapizzino" itself, situated in Testaccio District.

The Roman "rosticceria"
Street food in Rome is not just pizza. Another typical place where to taste fast but tasty food is the "rosticceria": a shop selling roast meat and other prepared foods were you can taste incredible dishes. In this case, the king of products is the "supplì": it is a rice ball filled in with mozzarella cheese and other ingredients, finally fried, surrounded by a crispy golden skin.
The "calzone" is another typical Roman food very important in the street food tradition: pizza dough filled in with mozzarella cheese, ham and several Italian typical ingredients. Fried or baked, it is always wonderful.
Even the cod fillets or zucchini flowers are a must of the street food: very simple ingredients, poor dishes, but featured by a character that will make you feel in love with them. They can be eaten as soon as they come out the kitchen, filled in with mozzarella cheese, ricotta cheese, anchovies, or any other ingredient the cook wants to put inside of them, ready to be tasted very fast, making you very happy. Fried food is a very typical Roman character, and you can find it in several high level places. One of them is Sora Milvia, where fried includes supplì, meatballs, panzerotti, and stuffed vegetables: all of them are dishes you have to taste if you want to make an exception during your diet.
Also sandwiches play an important role in the traditional street food. Among the several places where you can find them, the "paninaro" 200 Gradi probably is the most loved in the capital, where you can find peculiar fillings: ricotta cheese and pears, figs, ham, gorgonzola cheese, and so on. Another famous restaurant is Dar Ciriola, where you can taste sandwiches with salami and Roman typical cheese - cacio prenestino, pecorpecorino nobile, porchetta from Castelli Romani, and so on. 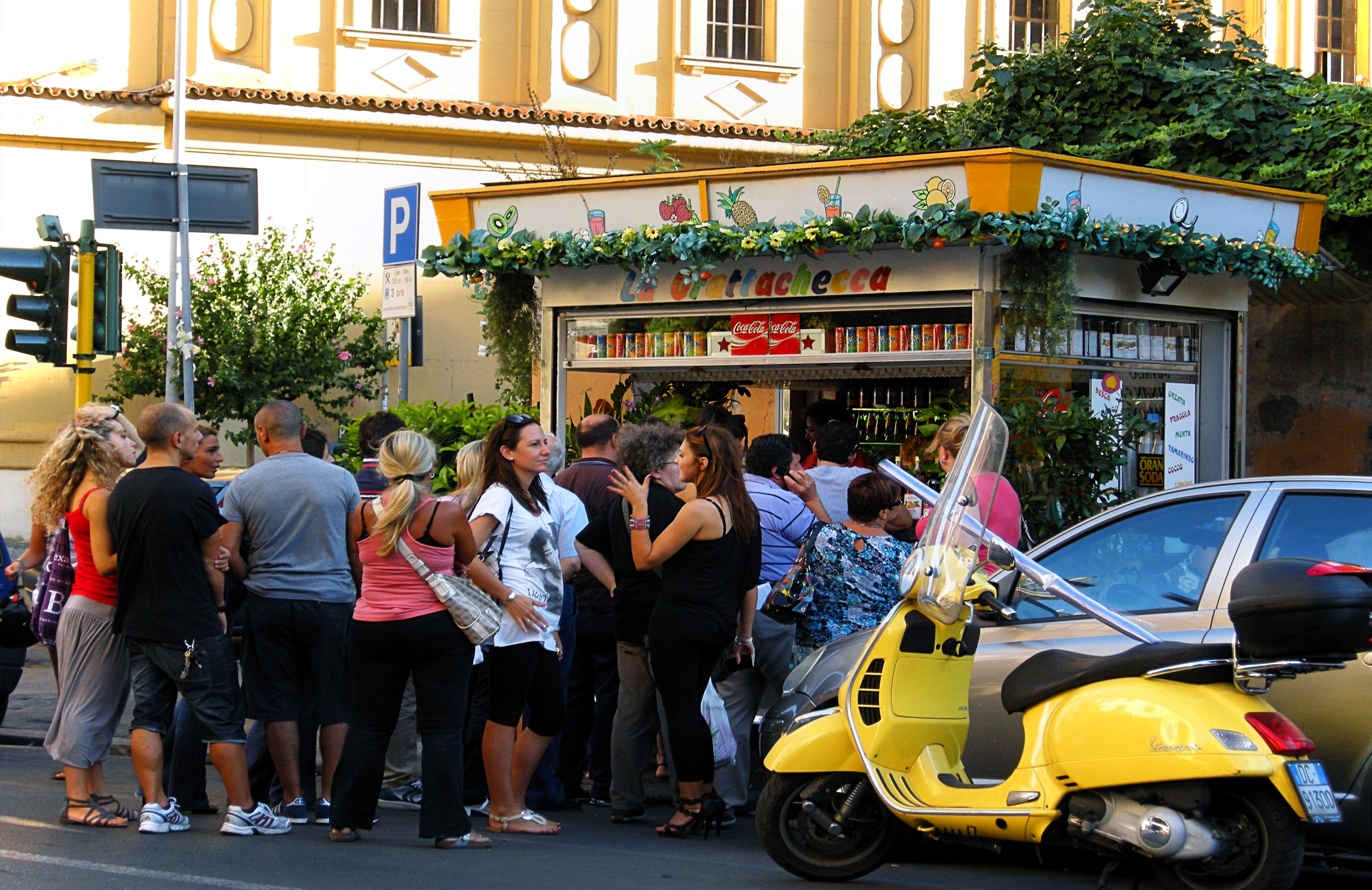 Looking for a dessert or a fresh snack?
There is no doubt street food includes desserts and other refreshing products, you can taste after a walk around the wonders of the city. Also in this case, the offer is very wide. An example of these incredible desserts is the "maritozzo": it is the most famous dessert it in Rome, and it is a brioche filled in with whipped cream many Roman citizens have for breakfast. Many patisseries offer it, but mind the calories: it really is a bomb!
Roman ice-cream plays a very important role in Italy. On the top of the list there is the Sanpietrino, a chocolate and cream semifreddo, with coffee, nuts, and zabaglione. Even the famous Tiramisù can be found in portions, ready to be eaten in any moment.
One of the most important places where you can taste a desert in Rome is Sorchettaro di Via Cernaia - patisserie Lambiase -: it is a croissant with cream and Nutella, appreciated by young people who love to eat it after a long amusing night: it is the top for very greedy people.
On summer days, an alternative you can taste is the "grattachecca": there are several places selling it. The difference with the traditional “granita” is the preparation of ice: it is not served in pieces, but grated from a big block of ice. Among the most famous kiosks, Sora Maria is the one still selling the traditional grattachecca, ready in less than one minute, so probably causing a long queue in front of the kiosk: but is a price you can pay if you want to taste the traditional dessert.