Flavours from all over the world, at Campo de' Fiori market

Campo de' Fiori market is the past and the present, tradition and innovation, folklore and racial integration. The culture the most ancient Roman habits get mixed with the older populations of the world, offering the possibility of tasting domestic but also all over the world flavours.
The multi-colour boxes containing fruit, vegetables of any type and several flowers make the city bright. But also the atmosphere you can breathe every morning, from Monday to Saturday colours this beautiful area, where Giordano Bruno's statue stretches up, not far from Piazza Navona: the vendors voices, their gags, the simple soul of people the life didn't give so much to, but they learnt how to take advantage of it anyway. In other words, this market is the portrait of an authentic Rome, far from globalization - as possible - and proud of what it was and what it will be. Let's discover something more about it.

Campo de' Fiori market: The origins of its name and its history
An old legend tells the market got this name by the will of Pompeo Magno - Roman politic and soldier; he dedicated it to a woman he was in love with, ordering to set there at theatre bringing the name of his loved woman. According to the story, the market was called Campous Florae that means "Flora's camp". However, the area was decorated by several varieties of flowers, in the years before the constructions of the buildings you can see there. The birth of the public square was connected to Pope Callisto III, in 1456, according to some historical evidences. The entire district actually saw the built of several elegant buildings of the time, such as the Orsini's residence, near the square. A further renovation of the area took place later on, in 1856, when the square finally got the current shape.

Someone speaks about “cursed statue”; other people don't even know what it is. But the statue of Giordano Bruno in Campo de' Fiori is very important. It is a monument that represents the victory of freedom of thought and expression against religious obscurantism, when on February the 17th, in 1600, the Dominican monk and philosopher from Nola was killed. Giordano Bruno - as well as other innocent victims - was killed by the church in the middle of the square, accused to be heretic. According to Catholic religion, a monk couldn't discuss the religious dogma, saying the universe has no limit and the sun just a fixed point in the sky. 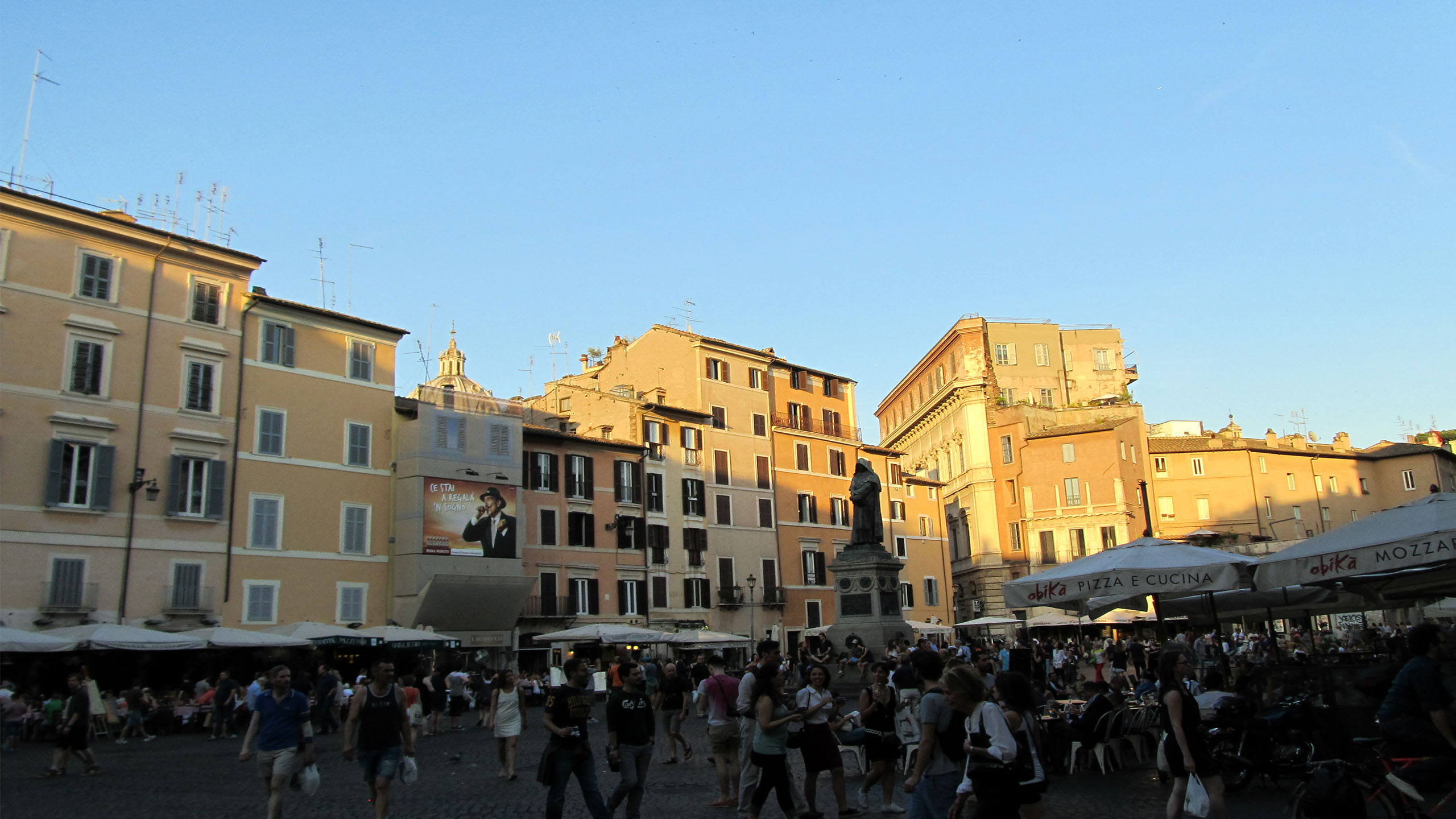 The statue dedicated to Giordano Bruno was put there in 1889, after about 10 years of works, and two centuries after the death of the philosopher, thanks to the Roman artist Ettore Ferrari. Making the people accept a so peculiar work was not easy at the end of the 19th century; the sculptor was considered one of the protagonists of the artistic celebration of a laic nation, after the Unity of Italy. The work you can currently see in the Square is not the first Ferrari made, representing Giordano Bruno: in 1879, he had proposed another one describing the philosopher and monk challenging the Inquisition Court; the state didn't approve that work of course, as it was considered a provocation.

Flavours from all over the world: what to buy at Campo de' Fiori market
You can buy season fruit and vegetables in this magical market, farm-to-table products sold for a very cheap price period. You will find Roman artichokes, local broccoli - similar to cabbage but Green -, spinaches, fennels, mushrooms, and the typical “puntarelle”: you will find any kind of fruit, vegetables and flowers you want if it is the correct season. You will also find several types of bread, legumes, rice, meat, fish and local artisan products: we can't actually say Campo de' Fiori is just a market, it deserves something more, according to the wide quantity and variety of products you can find there. And it's very interesting to see that not only Roman vendors work there, but also people coming from all over the world, introducing whatever can be boat in the Roman Square, such as spices and peculiar food. Among the market stands you can find the Amatriciana sauce, for example, or the condiment to make "Pasta alla gricia". 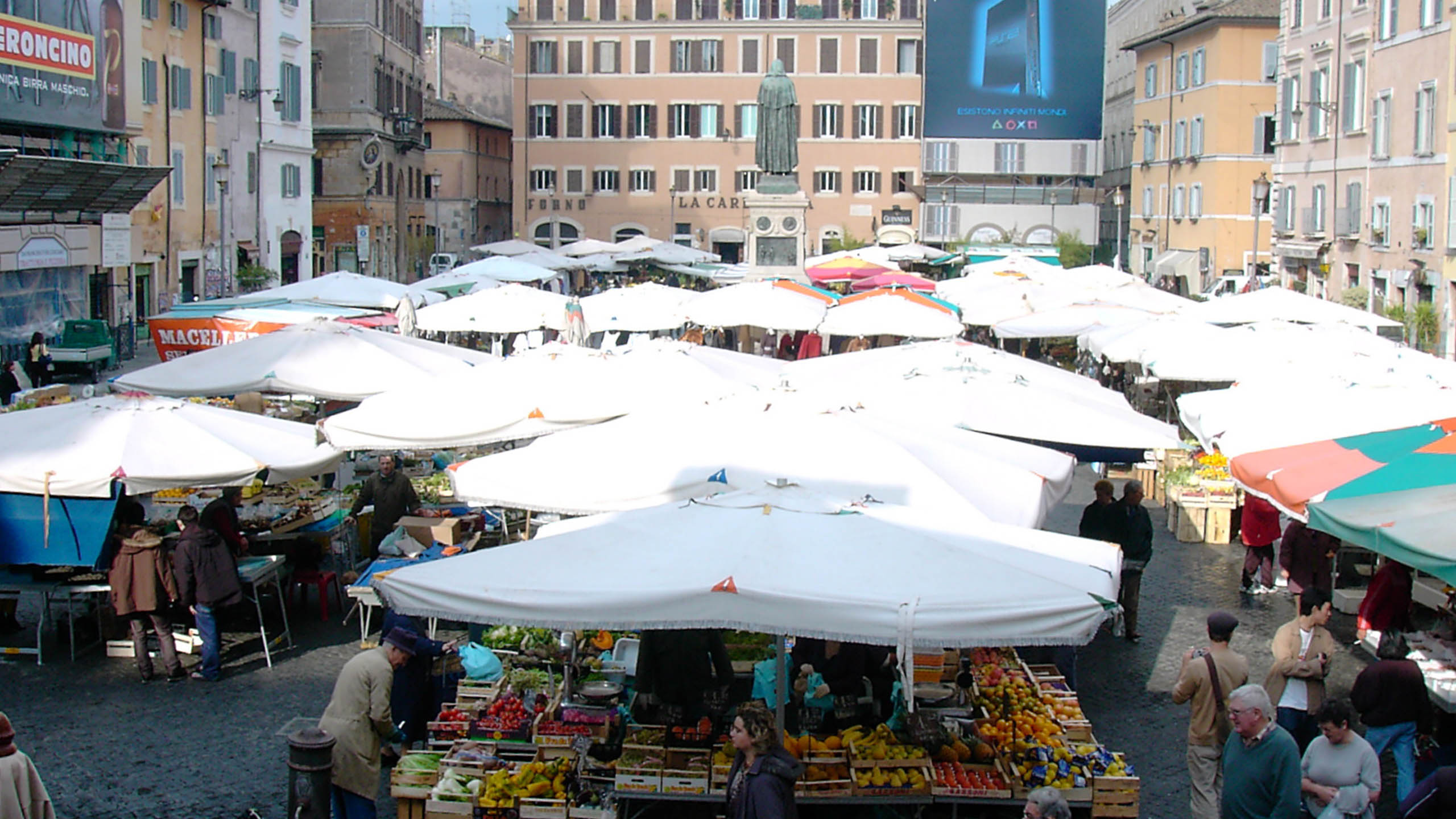 Flavours from all over the world: Campo de' Fiori market by night
Campo de' Fiori Square offers also nightlife. It is actually full of young people, meeting there to drink a glass of fresh beer, or having a meal with their friends, in the trendiest clubs of the city. Winter or summer is not important: movida “al Campo” - as they call it - begins at dinner time and - especially during the weekends - it goes on until the following morning, drinking in cocktail bars, cinema, theatres, restaurants, and bars - inside and outside. The square is full of tourists too, from all over the world, until late night. You will have the occasion to visit some typical narrow lanes of the city, offering several clubs: wine bars, disco pubs, ice cream and yoghurt parlors... and don't forget the typical Roman pizzerie and trattorie. What to order? Here you are the typical Roman dishes: Pinsa - an ancient Roman pizza -, pasta Cacio e pepe, Amatriciana, and Gricia. 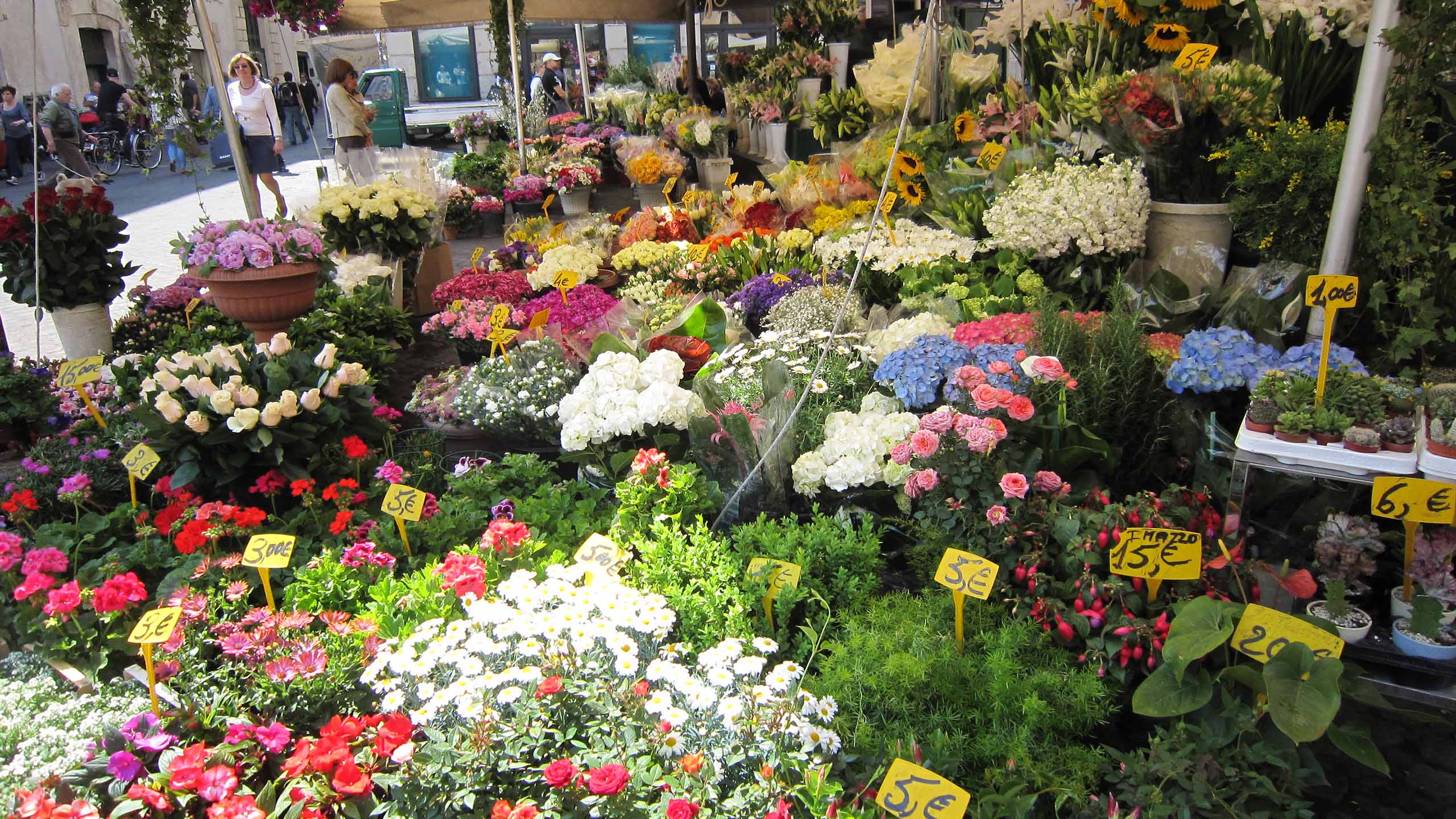