Discover Rome: from the historical centre to the suburbs, the best Street Art

Rome, the enchanting Eternal City, was renamed as the European capital of Street Art, by Artribune. In the capital of Italy, then, the past embraces the future.
Archaeology and history meet the vivacity and freshness of contemporary and urban art. The quantity and quality of the new masterpieces of art, their placement in central and peripheral areas of the city, regularly performed and legally acknowledged, are the prominent features of this artistic movement, which has literally made a splash in the capital.
Discovering the Roman street art means taking a route affecting approximately 150 streets and 30 districts, both central - such as Testaccio - than peripheral - e.g. Tor Marancia or San Basilio. The works realized in the recent years by Italian and internationally renowned artists - such as Alice Pasquini, Agostino Iacurci, Hitnes, Sten Lex, MOMO and Clemens Behr - are more than 330.

The best Street Art of Rome
The street art - neglected and affected by rebel manifestations and social denunciation - had a great merit in Rome: it has been able to donate new sap to the central and peripheral districts, in a condition of absolute degradation.
Thanks to the strong engagement of the institutions and the numerous cultural associations, the street art - considered to the vandalism for a long time - has finally become legal. The murals in the open air have transformed some forgotten areas of the city into real colour oasis, admired by hundreds of tourists.
Are you planning to stay in the capital and you would like to discover the Roman street art? You love photography and you want to catch shots of the essence of this artistic expression? Here you are some useful information about the places worth of a visit.

1. Ostiense
Near the historical centre, there is the neighbourhood where street art represents its true soul: Ostiense. According to the project "Ostiense District" this peripheral and industrial area - previously in total desolation - has now a new life: works by famous Italian and international artists, decorate the facades of the buildings - previously in terrible conditions - in Via Ostiense, Via del Porto Fluviale, and Via del Gazometro.
The masterpiece surely attracting more attention is the Blue one, an Italian talent, characterised by a string anti-capitalism, who has literally revolutionized the look of an old military warehouse, by the representation of a rainbow with endless shades of colour. Currently, the building is a squat. The colourful faces on the external walls of the building maybe refer to a message of openness towards the weakest people. 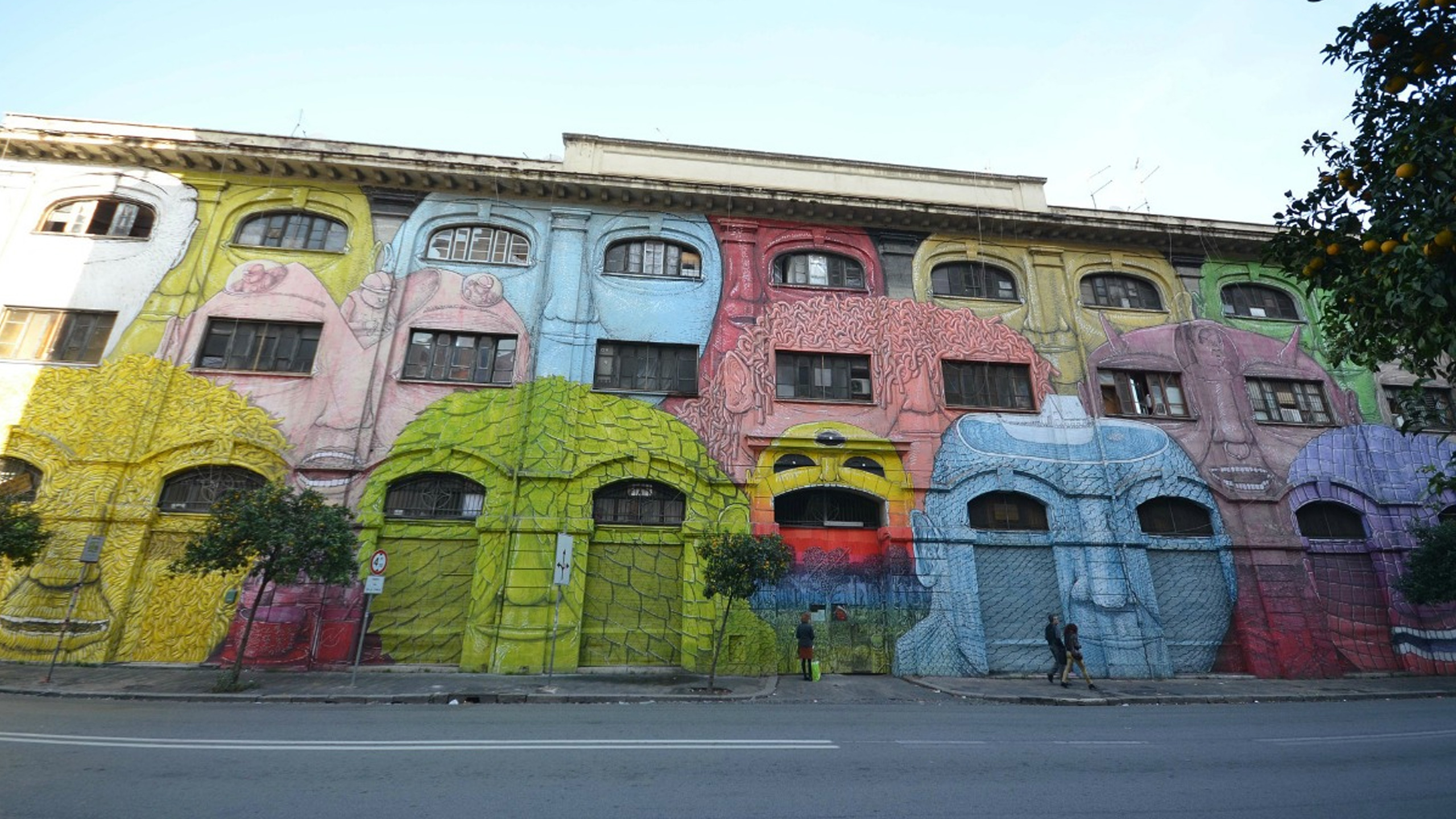 2. Testaccio
Not too far from the Ostiense district, there is Testaccio neighbourhood, hosting works of street art of great impact. Among them, there is the mural in Via Galvani, created by the artist ROA. Titled "Jumping Wolf", this painting shows a new interpretation of the Capitoline she-wolf, depicted in black and white, peculiar trait of Belgian writer.
The work - that occupies an entire facade of an inhabited palace - has been, however, object of controversies: its subject actually seems to be an aggressive wolf than the noble one told by mythology, symbol of the city of Rome.

3. Tor Marancia
This is the liveliest and most coloured district of the Italian capital. In 2015, a sort of cultural revolution has actually lead to a almost total city regeneration of this area. A leading role in this requalification has been played by the "Big City life" project: 20 writers famous world-wide decorated eleven buildings in via Tor di Marancia 63, in 70 days.
These works of art are really remarkable having given back dignity and voice to a peripheral area, in the oblivion and in the silence over a long time: "Santa Maria di Shanghai" (Mr Klevra), "Natura Morta" (Reka), "Spettacolo Rinnovamento Maturita" (Gaia), "Il peso della storia" (Jaz), are just a few of them.

4. San Basilio
Also this very degraded suburb - in the North-east of Rome - met a requalification, thanks to the project "SanBa". Promoters of it were two famous street artists, who made the riot of colours of this area: the Italian Agostino Iacurci and the Spanish Liqen.
Their works can be seen on the 4 sides of 4 buildings in the neighbourhood, different but with a strong love for nature and rural life in common: flowers, colours, insects, and plants of any variety (also tropical) predominate, as if they wanted to make San Basilio a heaven corner.

5. Borgata del Trullo
This district - very grey and problematic -, in the South-west of Rome, has recently gained a singular charm thanks to the so-called "Poeti der Trullo" - Poets of the Trullo district - work. The verses of these metro-romantic artists make you know the hard life of the Roman outskirts, telling about the street and its temptations - all about trafficking - which can be stopped only by the support of family and friends.
In this area, the street and poetry art melt in a happy marriage of vivid images and motivational words, such as "siete voi de 'sta vita i supereroi" that means "you are the heroes of this life". Visiting the "borgata" of the Trullo, you will breathe its idyllic and moving atmosphere. You will perceive above all the positivity and the will of redemption those boys so anchored to their roots.

Roman Street art: the instruments to discover works and places
You want to move around the multitude of murals in the Italian capital? Well, you can count on two important tools:

• the paper map of the Roman street art, developed by the Municipality and distributed in the tourist points of the capital;
• the Streetart Roma app, for smartphones and tablets, designed and created by Artribune.

In the map you will find the neighbourhoods and works of interest. For a complete mapping, you can visit the website www.turismoroma.it. Using the app - a real digital guide - you can easily navigate around streets and lanes and geo-locate the works. The latter are served by explanations to discover something about them.