The city Nanni Moretti talked about is a strange Rome, different from the one other directors - like Paolo Sorrentino and Federico Fellini - described. It is depicted as a not so glamorous but intimate city: "autarchic", as some movie critics said. Thanks to Nanni Moretti's movies, many tourists visited Monteverde, Via Gianicolense, Monte Mario and Ostia.

Nanni Moretti and Prati district
Nanni Moretti lived in Prati before moving to Monteverde. Prati is the district where he was born, where he attended primary school and where he made his first movies "Io sono un autarchico" - "I Am Self Sufficient", in 1976 and "Ecce bombo" in 1978, that made him famous. In the roads and the squares in Prati and Trionfale he spent his first years of life, especially in Via San Tommaso d' Acquino, not far from Piazza San Pietro and the Vatican Museums. Those places of cultural interest do deserve a visit: the Vatican Museums represent the most important museum complex in Italy; you can easily understand it getting to the entrance, discovering an interminable queue of tourists and citizens waiting for their turn to enter and admire the Sistine Chapel.
Not only Michelangelo's fresco - The Last Judgment - attracts tourists and lovers of the art: the name "Vatican" refers to the presence of other museums inside the complex: the Etruscan, the Egyptian and the Ethnological ones, in addition to the Collection of Modern Religious Art, the Library Vatican Library Museum, the Profane Gregorian Museum and the Galleries. We suggest you not to visit Rome during Christmas or in the summer: a spring trip or on October, when the city is still warm and sunny, is the best choice to visit it.

"Sogni d'oro", "Bianca", and "Aprile": Moretti's trilogy, in Monteverde
"Bianca" started the trilogy in 1984, when Nanni Moretti made us discover his still current district, Monteverde, for the first time. You probably don't know the names of the streets, as many Romans wouldn't. Some scenes of the movie took place on the Aventine and in Villa Borghese, but the background of most of the sequences is made of the streets and squares of his district. In "Aprile" - shot in 1994 - Nanni Moretti is called the "Lion of Monteverde". In "Bianca", the protagonist Michele Apicella walks with the girl he is in love with, Bianca, in Via Saffi: they talk about happiness.
In "Sogni d'Oro" the protagonist, the same Michele Apicella - Moretti's alter ego - explains Giacomo Leopardi's poetics to his friends and classmates, walking along the typical uphill streets of the Monteverde, in Via Basilio Bricci. Walking through the streets of Monteverde you will have the impression to be in a small hill town. In the early twentieth century there were only lawns, countryside, farmhouses and vineyards; the city was separated from Monteverde by its walls; you left Rome and you got there by Porta San Pancrazio. Not too much far from there, the beautiful seventeenth century residences Villa Corsini and Villa Spada stood out. In 1909, the then mayor of the city, Ernesto Nathan, approved a town plan to build new "houses", as the protagonist of "Caro Diario" would say. In the laic France, several religious orders were closed, so many clergymen and nuns moved to Rome. Pius XI suggested them to go to Monteverde, where the French nuns found only sheep, before the mayor Nathan's district would be born.
Monteverde may seem to you only a cluster of houses and gardens, inhabited by ordinary people, workers and old people. Yet in those uphill streets, now full of parked cars, great intellectuals and artists have lived. Not many people know the great poet Attilio Bertolucci and his son Bernardo - the director who shocked the world by his movie "Ultimo Tango in Paris" and who won the Oscar thanks to "The Last Emperor" - lived in Via Carini, together with one of the most important Italian intellectuals of all time, downstairs: Pier Paolo Pasolini. In a flat in Via Poerio, Maurits Cornelis Escher lived for ten years; he designed the floor tiles of his house, influenced by the city of Rome and also by the district itself: the famous lithograph in which he depicts himself inside of a sphere, "Hand with a reflective sphere", the artist was in the tower of Via Poerio, in Monteverde, where he had his personal office. 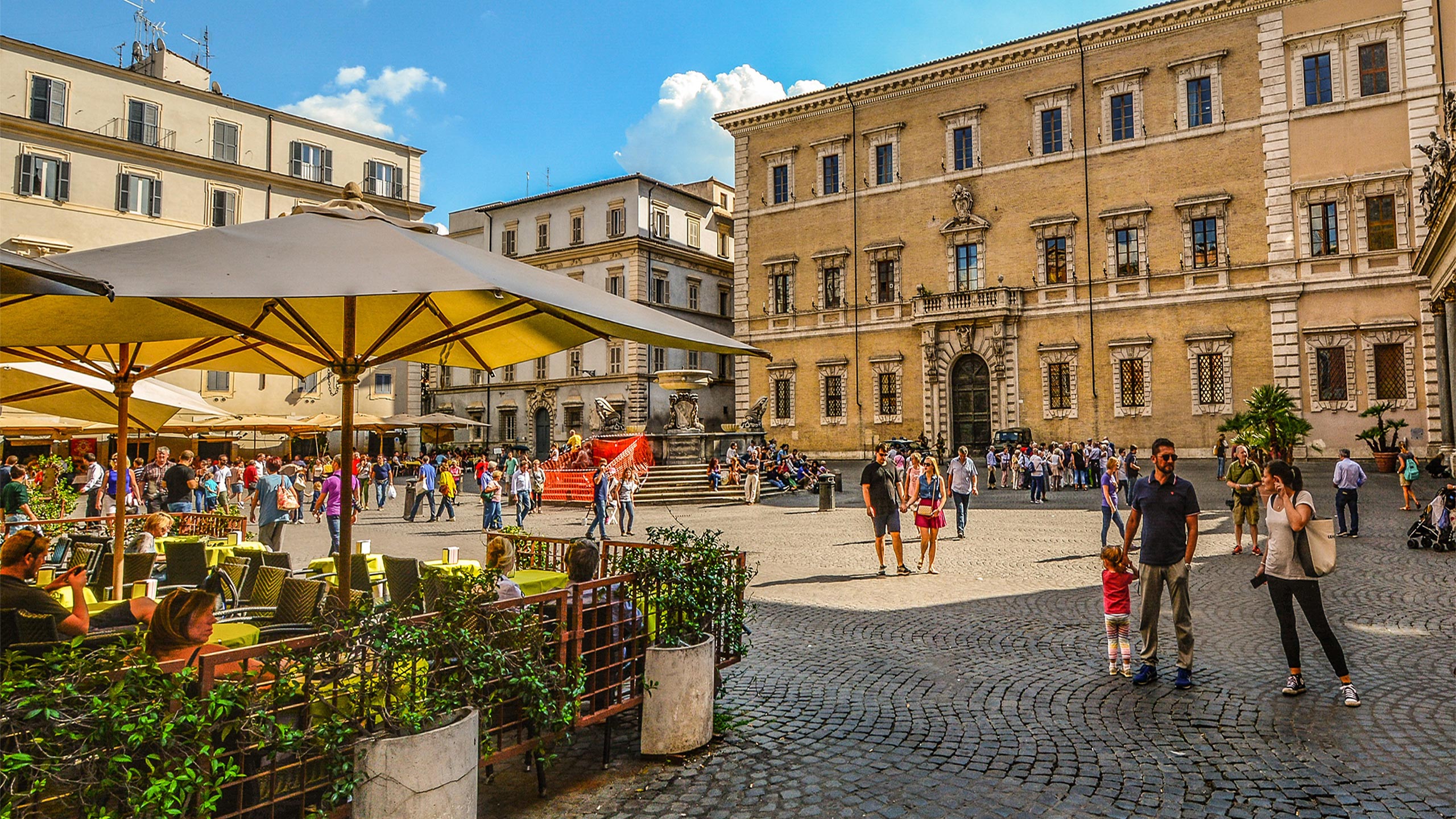 "Caro Diario", "Ostia", "Trastevere and Garbatella"
Pasolini and Monteverde, Pasolini and Ostia. One of the most beautiful scenes, among all those shot by Nanni Moretti in Rome, is in Ostia. He reaches the only one district of Rome bathed by the sea by a Vespa, accompanied by Köln Concert by Keith Karrett. The final stop of his short itinerary is the Idroscalo, where Pasolini was killed in 1975. Moretti paid homage to the great Friulian poet observing his monument. In Ostia, you will discover a modern sculpture made of concrete; for many years, it has been abandoned in a muddy, isolated, and surrounded by trash area. Today, the area has been reclaimed and the monument is situated in an ecological oasis.
For too much, time this area has been ignored by the mass tourism, but today many people fortunately pay homage to it. It is an unmissable step to remember the great poet and director of unforgettable movies such as "Accattone" and "The Gospel by Mattew". Pasolini loved Trastevere district as Moretti does, so that he decided to purchase the cinema situated near Porta Portese: the Nuovo Sacher. Precisely in the arena where the director projects the films, the moment of the aggression in "The mass has finished" was filmed, in 1985. Nanni Moretti himself, in the movie "Caro Diario", confessed that his favourite district in Rome the Garbatella. Walking around those places on May is an experience really worth of a trip to Rome, even if it was the only one you live there.