Fun facts about Rome: the legendary rivalry between Bernini and Borromini

Rome built its beauty and originality by its historical roots; from the footprints of its most ancient past to its most modern buildings, melt in a unique alchemy, the Eternal City offers its visitors monuments of exceptional artistic value and, for the most curious ones, a solid cultural tradition that lives in memories, words and metropolitan legends animating it.

The Roman seventeenth century
The long period beginning at the end of the Mannerism - symbol of rationality and human order - is defined Baroque architecture by scholars, and there is nothing more valuable available to the travellers, to satisfy their curiosity and their own senses, to be transported on a tour through the seventeenth-century Baroque Rome, for a few days.
An historical period longer than a century, in which Rome showed its amazing magnificence made of stuccoes, gold, precious decorations and sinuous curves of its bursting architecture, to the world. In the seventeenth century, Rome exhibited its power through great works of patronage; thanks to the papal intervention, the best artists, sculptors and architects of the time were engaged in a double path, making the capital unique and their genius eternal.
Among the artists able to create unforgettable works actually the expression of a timeless genius and still acknowledged today, Gian Lorenzo Bernini and Francesco Borromini animated the Roman culture bringing the innovative character of a new architectural tradition and gave the city priceless masterpieces.

Gian Lorenzo Bernini and Francesco Borromini
Artists of absolute and incomparable value, both of them were chosen by the Roman court to embellish the city by splendid testimonies. Two sides of the same coin you could think, but with very different features and peculiarities. Gian Lorenzo Bernini - a well-rounded master, sculptor, architect but also a skilled set designer - was a versatile artist, who animated the Baroque culture of the time as an uncontested example. Born in Naples, but bringing a solid Tuscan origin by his father, he was a genius with an exuberant character, able to become a charismatic leader in the Roman salons and to fully exploit the widespread network of contacts and friendships he created, obtaining benefits, numerous jobs and great fame.
Francesco Borromini was an architect of rare talent, perspicacity and creativity; born in the foggy Lombard lands, he moved and worked almost all his life in Rome, creating architectural masterpieces that can still be admired today. Purer expression of the Baroque genius, on the contrary, Bernini was a restless spirit. Dark and reserved, he was not inclined to worldliness and spent most of his life suffering strange streams of consciousness.
The relationship between Bernini and Borromini was almost immediately a conflict probably because of their deep character differences; bitterness became a real rivalry that animated the Roman culture of the time, by tongue and chisel, fortunately leaving precious architectural evidences. Even at their end, they were profoundly different: Borromini committed suicide crushed by the weight of a terrible depression; Bernini peacefully died, after a long time living the long illness causing the paralysis of his right arm preventing him from working, with irony.

The legendary rivalry between Bernini and Borromini through their works
The canopy of Saint Peter
The first challenge between the two artists took place in 1630, when Gian Lorenzo Bernini was commissioned to create the splendid "Baldacchino di San Pietro". Among Bernini co-workers, there was also Borromini who - thanks to his perspicacity and ingenuity - was able to realize very precise plans allowing the creation a perfect covering of the work. Although Borromini's work had been absolutely essential to complete the initial project, he had no acknowledgement. Thanks to the alliance between Bernini and Pope Urban VIII, the Neapolitan artist gathered fame and honour as well as a generous fee for the work done. Nothing was acknowledged to Borromini: sad, he publicly complained, not so much for the financial aspect, but for the lack of gratitude. The relationship between the two artists so consequently degenerated: the legend about the famous Palazzo di Propaganda Fide witnesses it. 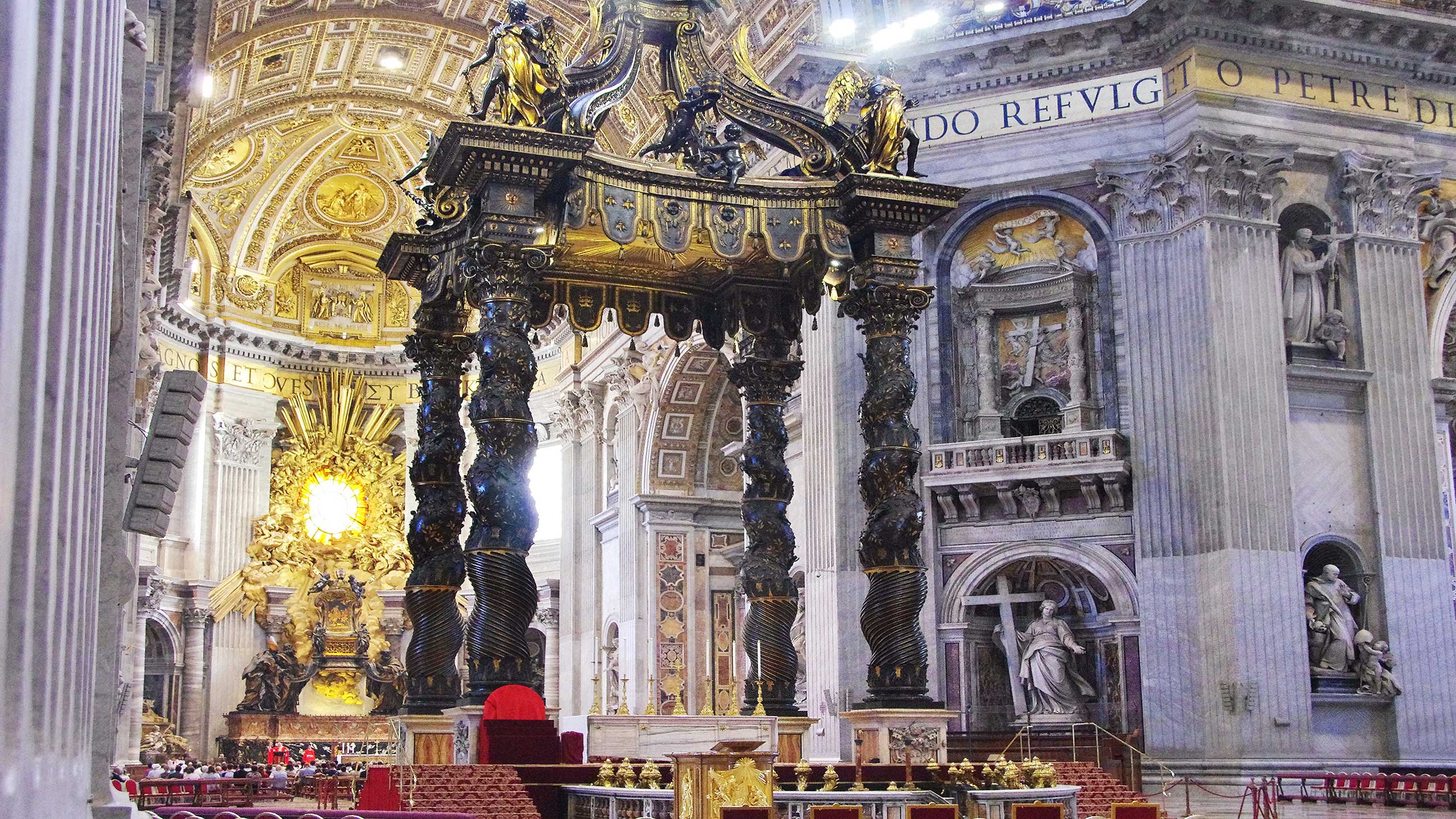 The Palazzo di Propaganda Fide
Borromini was able to find his revenge when, in 1640, he obtained the job of building the palace even though it had initially been commissioned to the rival who lived in a building near there. The building is a true architectural jewel: before its conclusion, Borromini wanted to celebrate it by sculpting two large donkey ears to mock for his rival, on the still incomplete facade. Bernini - characterised by a bad and choleric character - replied carving a giant phallus on the cornice of his property. The consequent upset was remarkable, and as the two works were very visible from the street, their removal was required.

The Fountain of the Four Rivers and the Church of Sant'Agnese in Agone - Piazza Navona
In 1647, Borromini obtained the task of managing the complete renovation of Piazza Navona, but Bernini mocked him presenting a much more majestic and elaborate project, using his own personal connections. Bernini realized the beautiful fountain of the Four Rivers: the legend tells the face of the Nile statue is covered not to see the disgrace of the church of Sant'Agnese in Agone, built by Borromini, located just in front of the fountain; in addition, the Rio della Plata has its arm extended with an open hand to protect itself by the imminent collapse of the church itself.
To give a response, Borromini realized the statue of Sant'Agnese, at the foot of the bell tower on the right, with its face turned on one side expressing its contempt caused by the ugliness of the fountain. We can't certainly know what is really true, but the legend gives a peculiar fascination to the works making the observer very amused.