Holidays in Rome: the history of the Eternal City told by its millenary walls

The first evidences of walls in Rome were those by Romulus, when he dug a groove along the perimeter of the pomerium by a plough. It was a holy space where buildings and burials were forbidden. However, it took centuries before the first city walls to defend the city were built.

The Servian Walls
The first true city walls of Rome were erected by Servius Tullius, the sixth king of the city; from him they took the name of Servian walls. The city wall exploited the morphology of the territory: it actually had a six metres high embankment made of Roman tuff and "cappellaccio" - a type of friable mineral; the work - there are no evidences today - was begun in the middle of the 6th century B.C. and it included the seven hills. We said the system of fortifications exploited the nature of the territory; in addition to the embankment, it also counted on an artificial moat, ten metres deep and about thirty metres wide.
After the sack of Rome, perpetrated by the Gauls, in 390 B.C., the Roman administration understood the city urgently needed a new city wall; it was built following the perimeter of the previous walls, using another type of material, the yellow tuff from Veio. Today, you have the possibility to imagine what the walls were like, thanks to two fragments of the original fortification. The new walls also were a deterrent to the incursions of the Carthaginians of Hannibal, encamped along the Aniene; Hannibal refused to march on Rome, after the battle of Canne, thanks to the Servian walls; they were a remarkable work as they protected a territory of more than 400 hectares, along eleven kilometres around the city. They were ten metres high and four metres thick. It included the Campidoglio and several gates, such as the Catularia and the Fontinalis; the walls were situated till today's Largo Magnanapoli, running along Via Ventiquattro Maggio and reaching Largo S.Susanna, where you can see a fragment of it, in the middle of a flower bed.
At the beginning of the last century, some parts were still visible, between Via S. Nicola da Tolentino and Via Salandra: about 30 kilometres of walls, demolished in 1909, but today you can admire at least two fragments of them, within the portico of a building of the early twentieth century. The fortifications reached the Aventine and the Tiber; this area created a debate among scholars: some argued this side of the city - the one facing the river - was not fortified, except for the two parts perpendicular to the Tiber; the hypothesis is confirmed by a text written by Livius.

The Aurelian Walls
Differently from the Servian walls, where you can see only some fragments scattered around the city, the Aurelian walls are still visible, even if not entirely. They were built in the 3rd century A.D., by emperor Aurelian. The need was to defend Rome from the Barbarians; at that time, the empire was threatened by a very serious political and economic crisis. An imposing system of fortifications was urgently needed. The works began in 271 and ended in 279 A.D. The walls were about six metres high, along 19 kilometres, eight more than those erected by Servius Tullius; under the empire of Maxentius, however, they were supplemented by further fortifications - as they were inadequate - also exploiting a different technique still well recognizable today. The Aurelian walls designed by the technicians of Maxentius were built using a technique called "opus vittatum"; the parts made of tuff and bricks were horizontal; if you visit the Villa of Maxentius, you will notice the particularity of this technique. In 400 A.D., the danger no longer came from the Alemanni but from the Goths; for this reason, Stilicho ordered further works, to make the city even stronger. The height of the walls was almost doubled; the walk was transformed into a real covered gallery, to prevent enemies from striking the Roman soldiers, who could however take advantage of numerous loopholes.
During your itinerary, you will have the opportunity to follow the path of the walls, from San Giovanni in Laterano to Via della Ferratella in Laterano, where they are still intact: they are located under the road, almost close to some houses. But the best preserved part is located in Porta Latina; from there to Porta S. Sebastiano, the walkway will allow you to discover one of the most picturesque areas of the city. The Aurelian walls were restored in the sixth century by Belisarius, again after the attacks of the Goths, in the sixth century A.D. Over the years, therefore, Rome realised a defence that had almost 400 towers, more than 100 latrines and over 2000 external windows. Today, you can see long sections of the of the walls, used by the soldiers to control possible enemy attacks. The recommended route starts therefore from Porta Flaminia, following the Muro Torto, till Porta Pinciana. It is well preserved, with 18 still visible towers. If you visit the tower of Via Po, you will find yourself in 1870. On September 20th, Italian people entered in Rome, through Porta Pia. In this part of the Aurelian walls, a cannon ball is still visible. 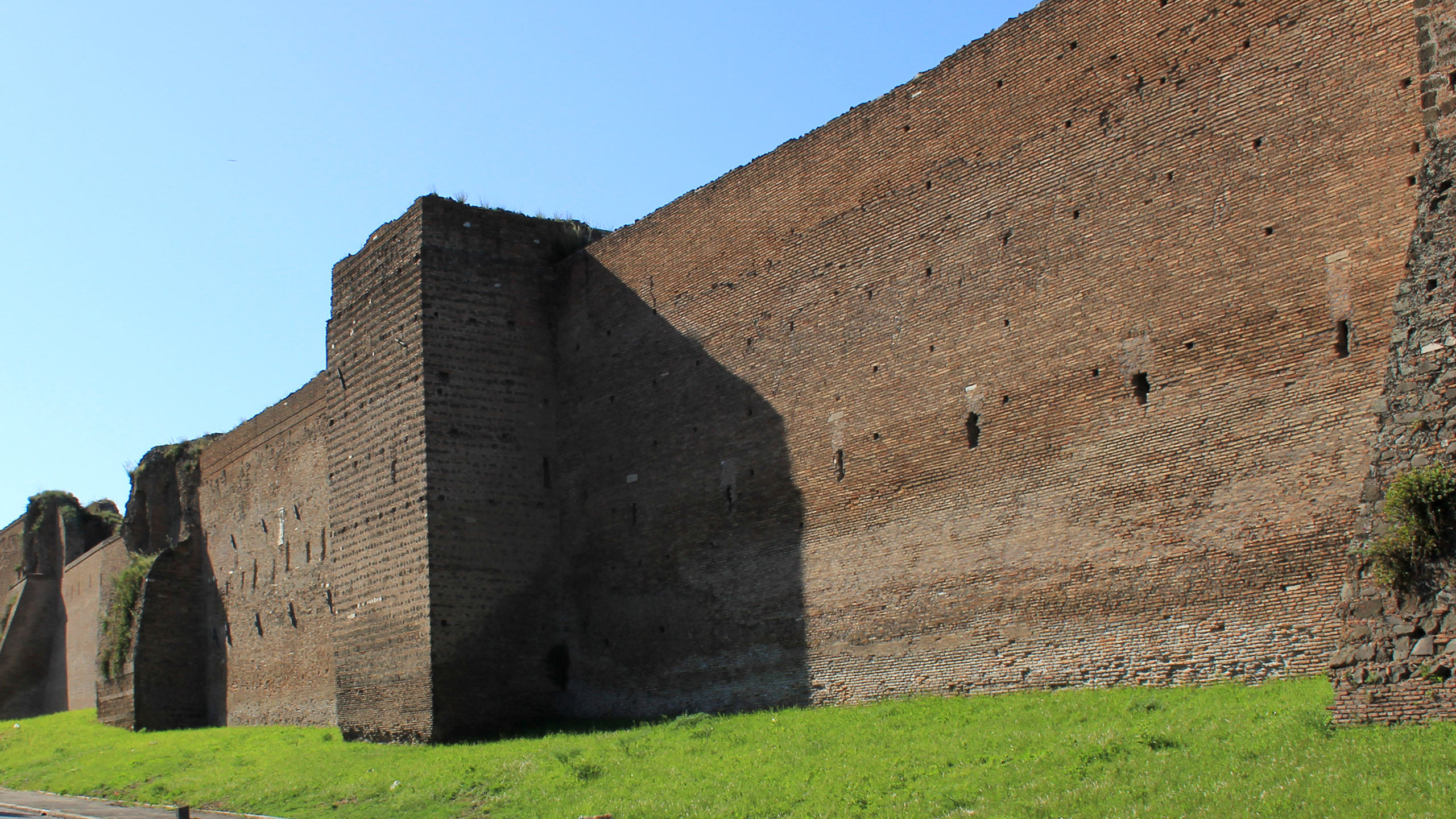 The Janiculum Walls
The Janiculum walls date back to later times. Pope Urban VIII wanted them to expand the defensive system of the Vatican city. One of the entrances is in Porta Portese and it is still perfectly visible; it was built in 1644 by architect De Rossi. Porta Portese - as you see it today - replaced an ancient gate of the Roman fortifications towards the Janiculum.
Despite the fears of Urban VIII, the walls did not face any danger for at least two hundred years; only in 1849, the Janiculum fortifications were the scene of the clash between the papacy and the Second Roman Republic. At the time, the Pope was about to lose the temporal power over the city.