Holidays in Rome: the places of Rome made famous by the Cinema

As well as being considered the Eternal City and one of the most beautiful places in the world, Rome is also the capital of cinema. Indeed, over the years, this location has been chosen to tell stories about love and friendship, noir and international intrigue. Walking around Rome means immersing yourself in a film set where everyone can identify with the stories so often seen on the television screen. So why don't you start to discover the places of the city made famous by the cinema spotlights? Here you are the unmissable ones.

An unusual set: the Parco degli Acquedotti and the Quadraro
The tour of Rome's movie sets opens on an unusual set, the one of Quadraro district, set of a famous Pasolini 1962 movie, "Mamma Roma". Now a very commercial district, this area once was extremely popular, inhabited by workers and feather merchants, the perfect setting for the prostitute Mamma Roma who, after the birth of her son, decides to change her life and dedicate herself to the child, becoming a respectable person. With the money set aside in many years of activity, she buys a cart and starts selling fruit at the Quadraro market. It is a pity the past cannot be erased and the district of the township where she decides to move with her son does not forgive her mistakes. The Quadraro is therefore the co-protagonist of this beautiful story that sees in the intensity of Anna Magnani a perfect interpreter.

Porta Portese and the bicycles
You surely remember the beautiful movie by Vittorio De Sica, "Ladri di biciclette", whose protagonist is a man who has just found a job as a billposter. However, he needs his bike to move from one place to another during his daily tour, but the vehicle gets suddenly stolen. To find the bike again, the protagonist goes to Porta Portese, a market selling stolen objects. The crowd of little scammers who survive thanks to their stopgaps is the antagonist of the billposter who desperately seeks out the bicycle moving to many other popular areas of the city such as Piazza Vittorio, the Flaminio Stadium, the bridges over the Tiber, and Via di Val Melaina where there are the council houses, refuge and hiding place of thieves and of the robbed too.

The Pantheon
You cannot miss the Pantheon among the most famous places in Rome made famous by the cinema. Protagonist of many different stories, from those of love to the thrillers, in the movie "Umberto D.", once again by Vittorio De Sica, the monument is featured in a different way. The movie actually tells about Mr. Umberto D. who suddenly becomes poor and cannot survive. He is therefore forced to beg, but is very ashamed and so he sends his little dog Flick forward with a hat in the mouth to collect some small coins. Umberto, however, doesn't go far, but hides among the columns of the Pantheon waiting for Flick's return to buy a piece of bread to feed them.

The romanticism of "Vacanze Romane"
"Vacanze Romane", with the unforgettable Audrey Hepburn and Gregory Peck, probably is the movie that mostly made the Capital famous. Thanks to the scene when the two go around the city by a Vespa to discover all its beauties, you can see many corners of the city that every year are a destination for tourists from all over the world. Together with Joe and Anna, by the scooter, you can admire Via Margutta and the Fountain but also Piazza di Spagna with the famous Trinità dei Monti stairway. At Castel Sant'Angelo, the scene of the struggle with the policemen takes place, when they try to bring the princess Anna back to the palace while the Bocca della Verità watches the two protagonists declaring their love each other.

The Trevi Fountain starring in "La Dolce Vita"
The Trevi Fountain is also the protagonist of another famous film, "La Dolce Vita" by Federico Fellini. The sensual bath of Anita Ekberg in a black dress in front of Marcello Mastroianni's wild eyes upset the sleep of generations of adolescents and fuelled the imagination of millions of girls in search of a passionate love like the one told by the movie. It probably is one of the few scenes shot in the real location, because for almost all the other settings, special scenes were shot in internal sets. Telling about that experience some years later, the protagonists remembered not only the beauty of the frame but also the frozen water of the Fountain on a winter evening. 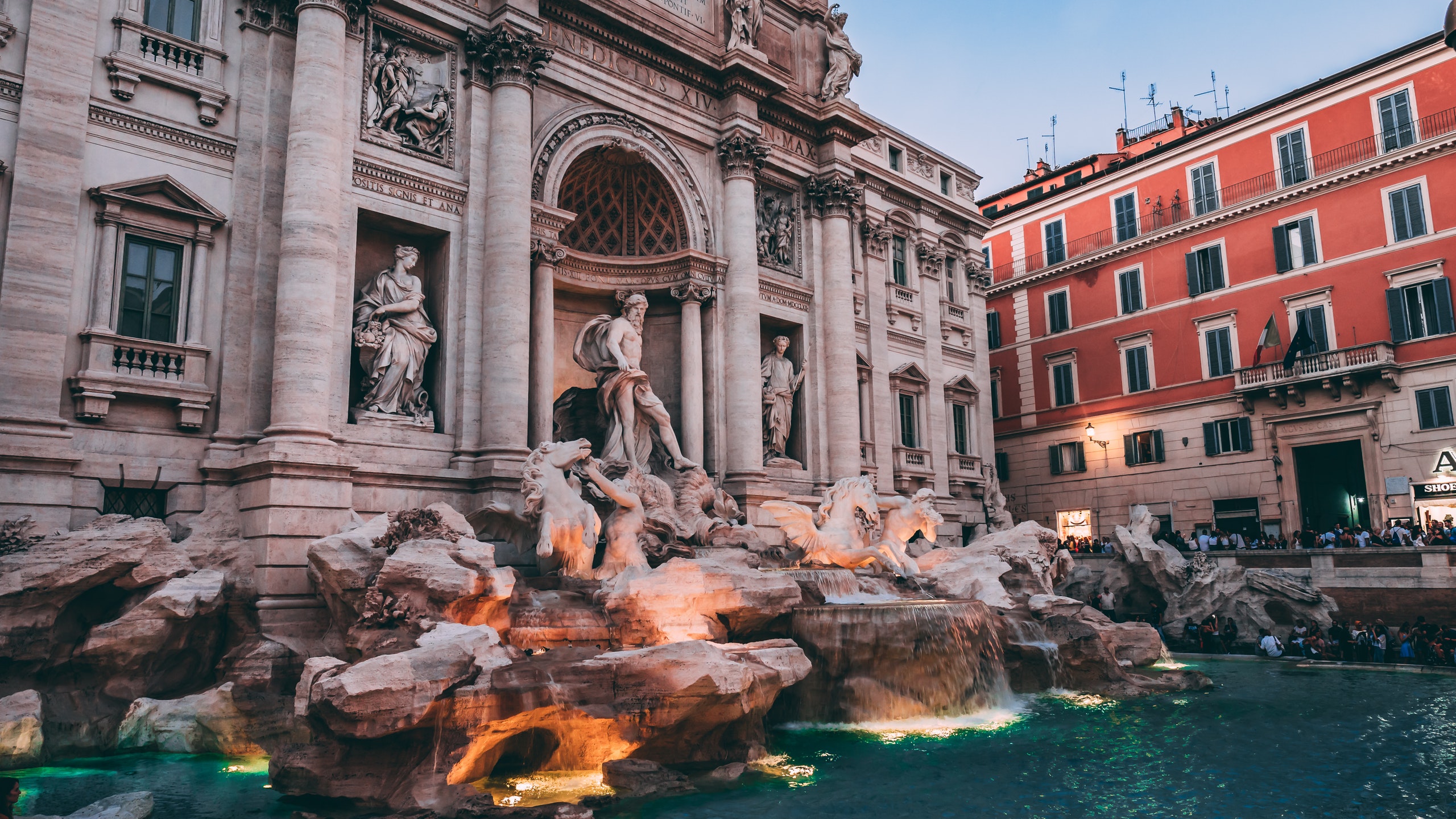 The centre of Rome in "Angels & Demons"
The most mystical part of Rome is instead the protagonist of "Angels & Demons", the movie with Tom Hanks, inspired by one of Dan Brown’s novels. In this movie, the protagonist must discover the secret path of the Illuminati containing enigmas and deadly mysteries. Along this journey, Tom Hanks leads the spectators to discover some lesser-known areas of the historical centre of Rome, such as the church of Santa Maria della Vittoria from where the film starts. However, the famous places that have always hidden within themselves a part of mystery such as the symbolic Piazza Navona, the mystical Piazza San Pietro, the suggestive Castel Sant'Angelo and, once again, the Pantheon cannot miss.

The last Rome of "La Grande Bellezza"
In Sorrentino's "La Grande Bellezza", the Rome you see is modern and decadent. This movie awarded by an Oscar in 2013 is a hymn to the beauty of Rome, but also to its poignant melancholy. Obviously, the corners of the Capital were chosen to represent the mood of Jep Gambardella, the protagonist played by Toni Servillo. Frame by frame, the Trevi Fountain, Piazza Navona and Piazza di Spagna, the Gianicolo, the Colosseum, Villa Borghese, the Baths of Caracalla on the Aventine, the Aqueduct Park and much more appear on the screen. The awesomeness of Rome at dawn, lit by a delicate pink light, is in the middle of the decay and the solitude of a man who made the city of Rome his lover and his greatest love.