Holidays in Rome: the wonderful Baroque fountains of the Eternal City

Among the several symbols of the city of Rome, the wonderful Baroque fountains deserve special attention. The most famous one is the Trevi Fountain. The second position is occupied by the Fontana dei Quattro Fiumi - the Fountain of the Four Rivers -, in the centre of Piazza Navona, where another fountain stands: the Fontana del Moro - the Fountain of the moor. Less known by foreign visitors, but loved by the Roman citizens, the Barcaccia, in Piazza di Spagna, and the Fontana del Tritone - the fountain of the Triton - located in Piazza Barberini, are finally worth of mention. The five fountains symbolize the importance of Baroque art for Rome, closely connected to the famous artist Gian Lorenzo Bernini, for many years; Rome has to thank him for the quare and the canopy of Saint Peter, in addition to other works.
Bernini is the author of the Fontana del Tritone, in addition of the design of the Fontana dei Quattro Fiumi - inspiration for hundreds of fountains in Europe and in the world - and the Fontana del Moro. Bernini's father - Pietro Bernini - was the author of the above-mentioned Fontana della Barcaccia, at the foot of the famous Piazza di Spagna. Here, you are the most famous Baroque fountains of Rome, you can visit during your stay in the capital.

Fontana di Trevi
Among all the fountains in Rome, the Trevi Fountain is the most scenic one, as well as the best known by foreign tourists. Anyone visiting Rome at least once in their lifetime throws a coin inside of it. The architect Nicola Salvi designed it, inaugurating it in 1735. One of the most famous scenes of the Italian and international cinema panorama was shot there: the of the actress Anita Ekberg took, in a scene of the movie "La dolce vita", by the director Federico Fellini.

Fontana dei Quattro Fiumi
Danube, Nile, Ganges and Rio de la Plata: the four most famous rivers in the world, together to give life to the Fountain of the Four Rivers, commissioned to Gian Lorenzo Bernini by Pope Innocent X. The fountain - among the most famous one all over Rome - is located near the obelisk of the Circus of Maxentius. It is inspired by the famous Fontana dei Tre Fiumi Carniolani - Fountain of Three Carniolan Rivers -, one of the symbols of Ljubljana, capital of Slovenia, designed by the Italian artist Francesco Robba, in the first half of the eighteenth century.

Fontana del Moro
In Piazza Navona, there is also the Fontana del Moro - the Fountain of the Moor - by Gian Lorenzo Bernini: it represents a triton holding a dolphin with inhuman strength. The Italian sculptor and painter Giovanni Antonio Mari completed the original project by Bernini, in the second half of the seventeenth century.

Fontana del Tritone
Built about 20 years before the Fontana del Moro, the Fountain of the Triton - is one of the most famous Baroque fountain in Rome. As many other works in the Eternal City, it was made by the Neapolitan artist. The fountain represents a triton vigorously blowing, sitting on a shell. The image Bernini evoked always has great success among tourists, so that the Fontana del Tritone is among the most shot ones.

Fontana della Barcaccia
The virtual tour of the Baroque fountains in Rome ends in Piazza di Spagna, in front of the Fontana della Barcaccia, where we find the fountain by Pietro Bernini - father of Gian Lorenzo and first teacher of the illustrious son. The client was Pope Urban VIII as usual, who discovered Gian Lorenzo Bernini as an excellent artist, in the following years. The Barcaccia is located at the foot of the Trinità dei Monti staircase. The representation of the boat is connected to a story whose protagonist is Piazza di Spagna at the end of the sixteenth century, when after a flood of the river Tiber, an empty boat - "Barcaccia" is the pejorative form of "boat" - reached the centre of the square astonishing the people. 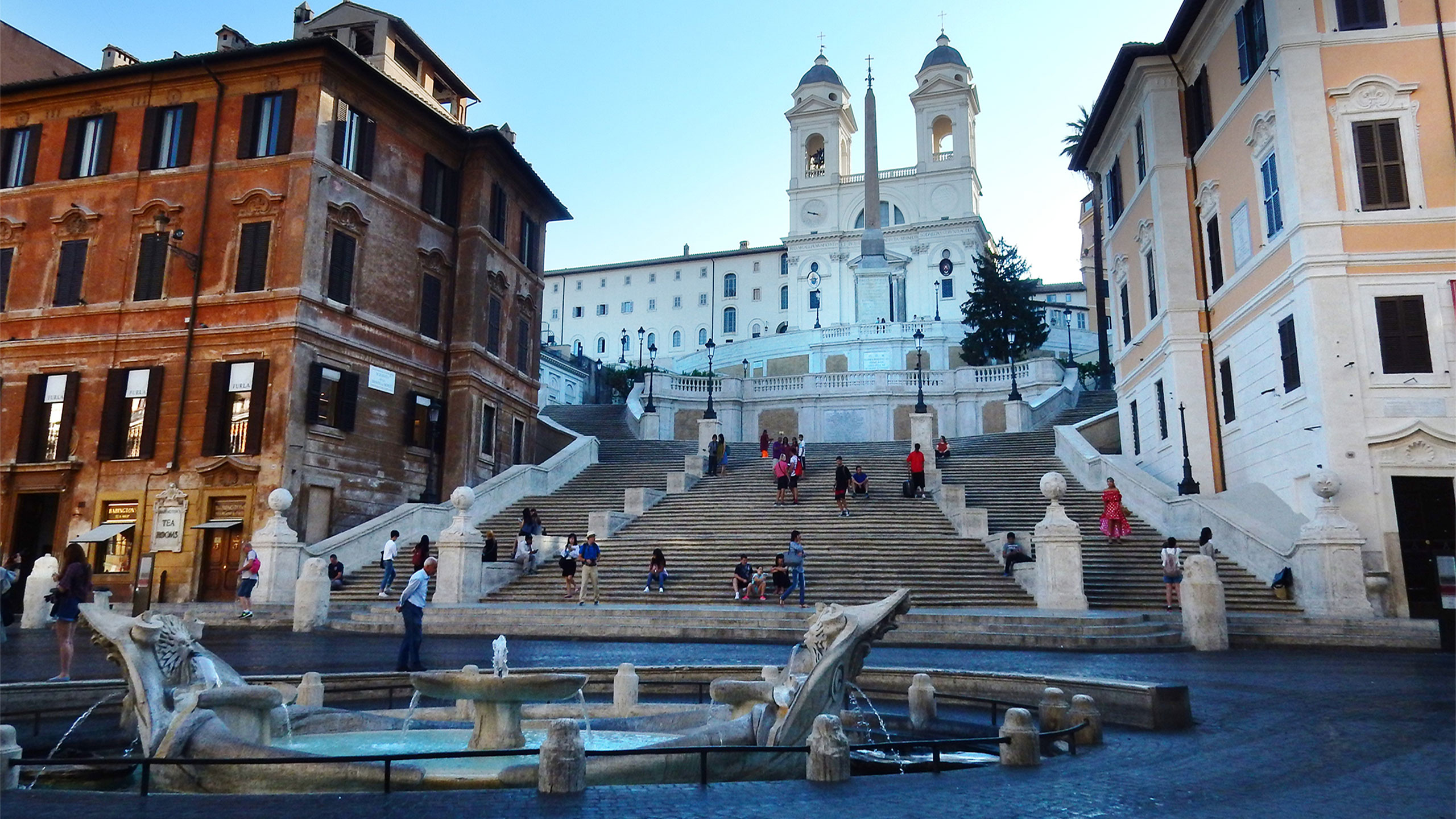 Tour of the Baroque fountains in Rome
The beauty of the Baroque fountains of the city of Rome deserves a special walking tour, recommended to admire them one after the other. Assuming a departure from Piazza Venezia - where there is the Altare della Patria -, follow the instructions to Corso Vittorio Emanuele II and Corso del Rinascimento, until you reach Piazza Navona, where there are the Fontana dei Quattro Fiumi and the Fontana del Moro.
From Piazza Navona, head towards Piazza di Spagna, passing through Via dei Prefetti and Via Borgognona. The duration of the walk is just more than 10 minutes. In Piazza di Spagna, there is the Barcaccia, designed by Pietro Bernini, father of the best known Gian Lorenzo Bernini. The next destination is the Fontana di Trevi, less than a 10-minutes walk from Piazza di Spagna. The two main streets are Via della Propaganda and Via della Stamperia, leading to one of the most famous fountains in the world. From there, finally, move to Piazza Barberini, about 500 metres from Fontana di Trevi. The benchmarks to reach Piazza Barberini as quickly as possible are Via del Lavatore, Via in Arcione and Via del Tritone.
In Piazza Barberini, you can find the Fontana del Tritone but also the Fontana delle Api, and the well-known Palazzo Barberini, built by Gian Lorenzo Bernini for Pope Urban VIII, in collaboration with the other great artist of that period, Francesco Borromini, with which Bernini was often in conflict , even if they made a monumental work together: the Canopy of St. Peter. Overall, the itinerary measures 3.6 km and the estimated duration of the journey on foot is about 45 minutes.

The other fountains built by Bernini in Rome and surroundings
Gian Lorenzo Bernini did not design only the Fontana dei Quattro Fiumi, the Fontana del Moro and the Fontana del Tritone: as mentioned above, the illustrious versatile artist born in the city of Naples has also realised the Fontana delle Api on behalf of Pope Urban VIII, situated in Piazza Barberini, in front of the palace with the same name, once a papal residence, now site of the Galleria Nazionale d'Arte Antica - National Gallery of Ancient Art. Another fountain by Gian Lorenzo Bernini, located in the ghost town of Monterano, in Canale Monterano village, is the Fontana del Leone, commissioned by Prince Angelo Altieri. The last fountain built by Bernini you can find near Rome is the Fontana del Bicchierone - the Fountain of the big glass -, located inside the famous garden of Villa d'Este, near the city of Tivoli.