June 2th: the National Celebration of the Italian Republic

The National Celebration of the Italian Republic celebrates the birth of the Italian Republic - as its name tells says -, from the 1946 referendum abrogating monarchy. It’s a patriotic symbol for the war dead people who fought for a free nation. Rome, the capital of the celebrations
Two places host the show of the Republic celebrations: the Fori Imperiali, where you can see the soldiers parade, and the Altare della Patria where the President of the Republic offers a laurel the Unknown Soldier monument, in memory of the fallen.

Historical background
In 1946, the referendum took place between June 2nd and 3rd, asking to the Italian people which type of nation they wanted for their country. They had to choose between monarchy and republic. We should remind you they had been living the WW2, the Fascist dictatorship – supported by the royal family – for more than twenty years.
The electoral card had two symbols: the royal family coat of arms – the Savoy’s – on one side, and the symbol of a towered Italy, on the other one.
The king – Umberto II di Savoia – didn’t wait for the referendum result, and he moved to Portugal with his whole family, to escape any further and eventual tragic struggles between monarchy and republic supporters, on June 13th.
From January 1st, the Italian Constitution - promulgated by the temporary head of State De Nicola, lately abrogated in 2002 – prohibited the male members of the Savoy’s to enter the country .

On June 18th 1946, the Corte Costituzionale declared the majority of the Italian people had voted for the Republic: from that moment on, every June 2nd the festivity is celebrated, while the Italian reign used to be celebrated on the first Sunday of the month, honouring the Statuto Albertino – the first Italian sort of constitution. The referendum was very important, because of its choices, but also because it was the first universal suffrage.
The first celebration took place at the Fori Imperiali, with troops marching and parading in front of the President of the Republic, in front of the Altare della Patria, on June 2nd, when the then President Luigi Einaudi put the first laurel in front of the Unknown Soldier Memorial, followed by the troops getting down the stairs, paying homage to the President.

Fun facts
The celebration of the Italian Republic hasn’t taken place on the same day or city by the time: in 1961, it actually was set in Turin – as it was the first capital of Italy in 1861, and in 1963, it was celebrated on November 4th - the Army and Unity day - as Pope Giovanni XXIII was dying.
In 1965, the coat of arms of the soldiers killed during the WWI took part to the parade, as it was the fifth anniversary of Italy joining the war.
From the 70s on, as the economical framework was not very good, law nr. 54 of 1977 moved the celebration to the first Sunday of June – same day of the Statuto Albertino celebrations. In 2001, Carlo Azeglio Ciampi - the then President of the Republic – moved it to the original date, to strengthen the Italian culture symbols. 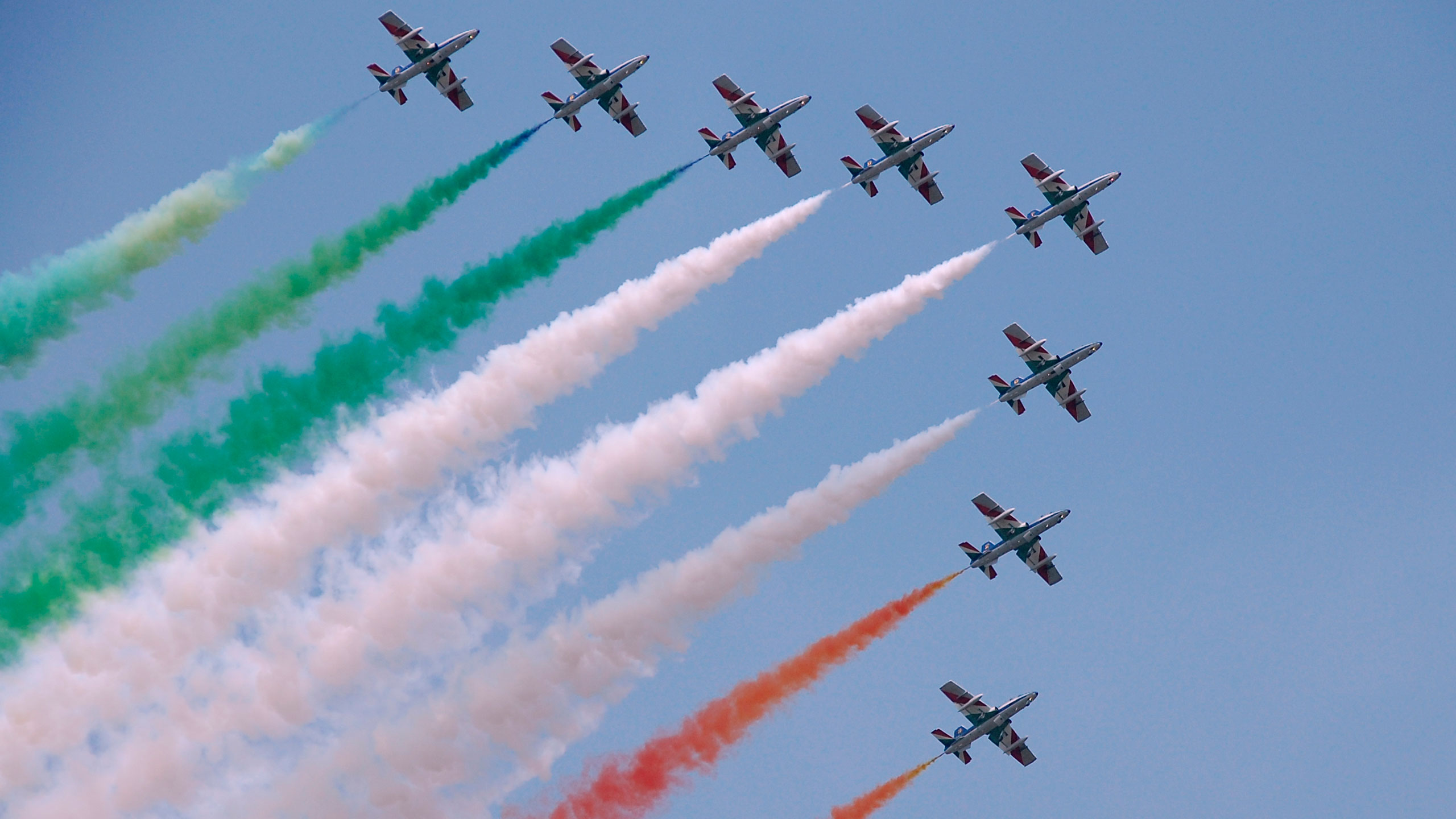 The ceremony
Celebrations start by the flag-hoisting in front of the Altare della Patria, where the President of the republic pays homage to the fallen, by a laurel to the Unknown soldier monument, in presence of the President f the Consiglio dei Ministri, the President of the Senate, the defense chief of staff, etc.
In a solemn moment of silence, the Italian hymn – the Mameli hymn – gets played, introducing the famous Tricolor arrows – Italian air fleet - making a breathtaking show, flying in the sky.
The President of the Republic goes to Via di San Gregorio to observe the troops, to finally reach the presidential tribune at the Fori Imperiali, to watch the parade together with the other very important people.
In the afternoon, the presidential gardens are open to the public – at the Quirinale – where the army bands play great music. Other humbler ceremonies take place all over the country, and even abroad, at the Italian Embassies, inviting the hosting country President. In 2012, the ceremony and the parade were dedicated to the Emilia Romagna region’s earthquake survivors, to prod the rebirth of the area, but anyway causing some contrasts, asking to stop the manifestation, because of the former events. In 2013, the ceremony got more simple, as the country was facing a hard financial moment. From 2015, the ceremony is the same of the past, thanks to the new President of the Republic Sergio Mattarella.

The military parade
The military parade was introduced in 1950, but in 1976 the tradition stopped because of the Friuli region earthquake, in order to employ the means for helping the people, rather taen taking part to the parade.
From 1977, it was completely cancelled. In 1983, it was re-introduced, but on June 5th, to commemorate the “Resistenza” against the German troops, during the WWII. During the following years, the parade took place at the Fori Imperiali, and then at the Terme di Caracalla, suspended again in 1989, to get even more simple by the following years: in 1999, the celebration took place in front of the Altare della Patria only.
As we have already said, the then President of the Republic Ciampi – decided to improve the ceremony, and in 2000, the military parade was reintroduced, adding the troops of the Protezione Civile and Local Police.
Even if there were more varied troops, the number of participants was anyway inferior. During the following years, the United Nations and NATO forces have taken part to the parade, too.