Rome “caput mundi” gives you an unlimited number of places where to go to feel magic sensations, and when you think you have seen everything you could, you actually find a new narrow lane or a monument you had missed.
Its surroundings are worth of a visit too, and today we want to propose you a really interesting place where Virginia Woolf, Ungaretti, and Moravia have created and found their inspiration for their famous works.
We are talking about the famous gardens of Ninfa, situated less than one hour far from the capital of Italy, in the area of Cisterna di Latina, declared natural monument of Regione Lazio, in 2000.

1. The legend of the garden of Ninfa
The Legend tells the beautiful princess Ninfa lived with her father in a castle, near the lake, at the bottom of Lepini Mountains.
It seems the area nearby was full of swamps, where mosquitoes and the terrible malaria where protagonists.
Her father wanted to reclaim the area, and so he called the sovereigns of the nearby areas. The one able to succeed would have married his daughter, secretly in love with Martino. The latter - a good man - didn't succeed, while Moro - the wizard king - completed the work thanks to his witchcrafts.
Ninfa jumped into the lake to escape and avoid her destiny, and she disappeared forever.

2. The story
This story - taking its name by a little Roman temple dedicated to the Naiad Nymphs - started in the 18th century, when Emperor Constantine V Copronimo gave this fertile area to Pope Zaccaria. The territory – where a few people lived at the time - had an important strategic value, because it was situated in via Pedemontana.
When the Frangipane family arrived there, this place got characterized by an architectural, economic, and political development, becoming a real city.
The following events led to a changing of the guard, and Ninfa became property of the Caetani family that made many changes: the castle got enlarged, by adding the walls and the raising of the existing tower, while the baronial castle was built. 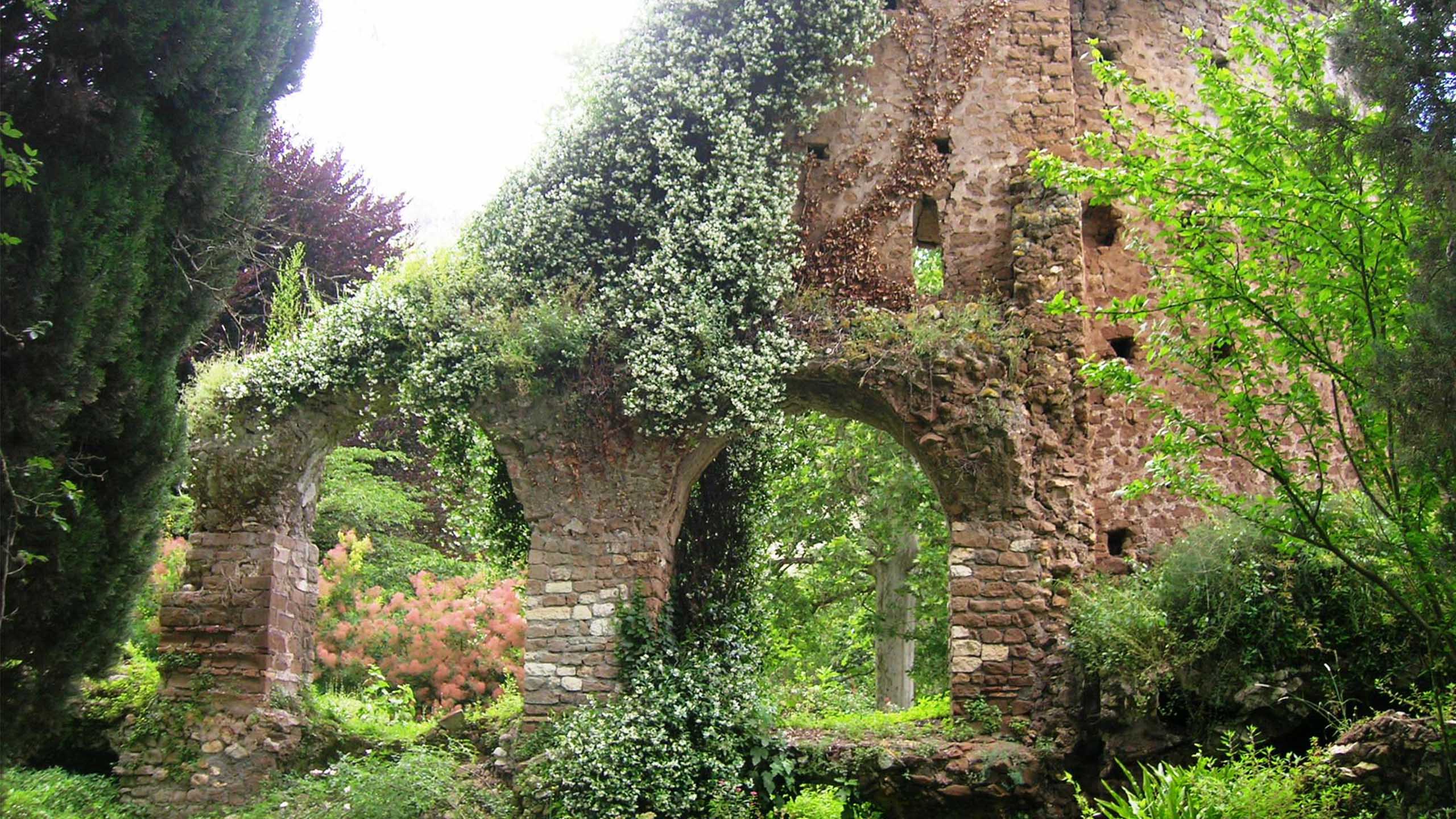 The little city, victim of the malaria and of the attacks, was abandoned by its inhabitants, but when cardinal Niccolò III Caetani arrived there, he gave a new impulse, in the 16th century. They actually made a new garden where several varieties of citrus plants were planted, to later add some fountains, too.
At the end of the 19th century, the area was completely reclaimed, many buildings, such as the baronial building, were restored, and the park took a typical romantic Anglo-Saxon aspect.
Marguerite Caetani made many changes according to her feelings, freedom and without any geometrical shapes.
Her daughter completed her work, enriching it by other plants – magnolias and climbing roses - she has never used any fertilizer, but she supported the natural development of flowers; she also added a "rock garden" near the Southern walls of the city.

3. The flora and fauna of the gardens of Ninfa
The charming garden - on an 8 hectares surface - is surrounded by a fairytale atmosphere, thanks to the ancient city remains, and the several rivers crossing it.
This green area welcomes you with more than 1300 different types of plans, where you can find 19 varieties of deciduous magnolia, birch, water iris, maples hailing from Japan, viburnum, honeysuckle, dogwoods, camellias and Clematis.
The particularly favorable weather conditions allow the cultivation of avocados, bananas, and of the gunnera manicata of South America.
There are cherries, apples, tulips and different types of climbing roses even on the ruins, and others grow along the banks of rivers and streams. 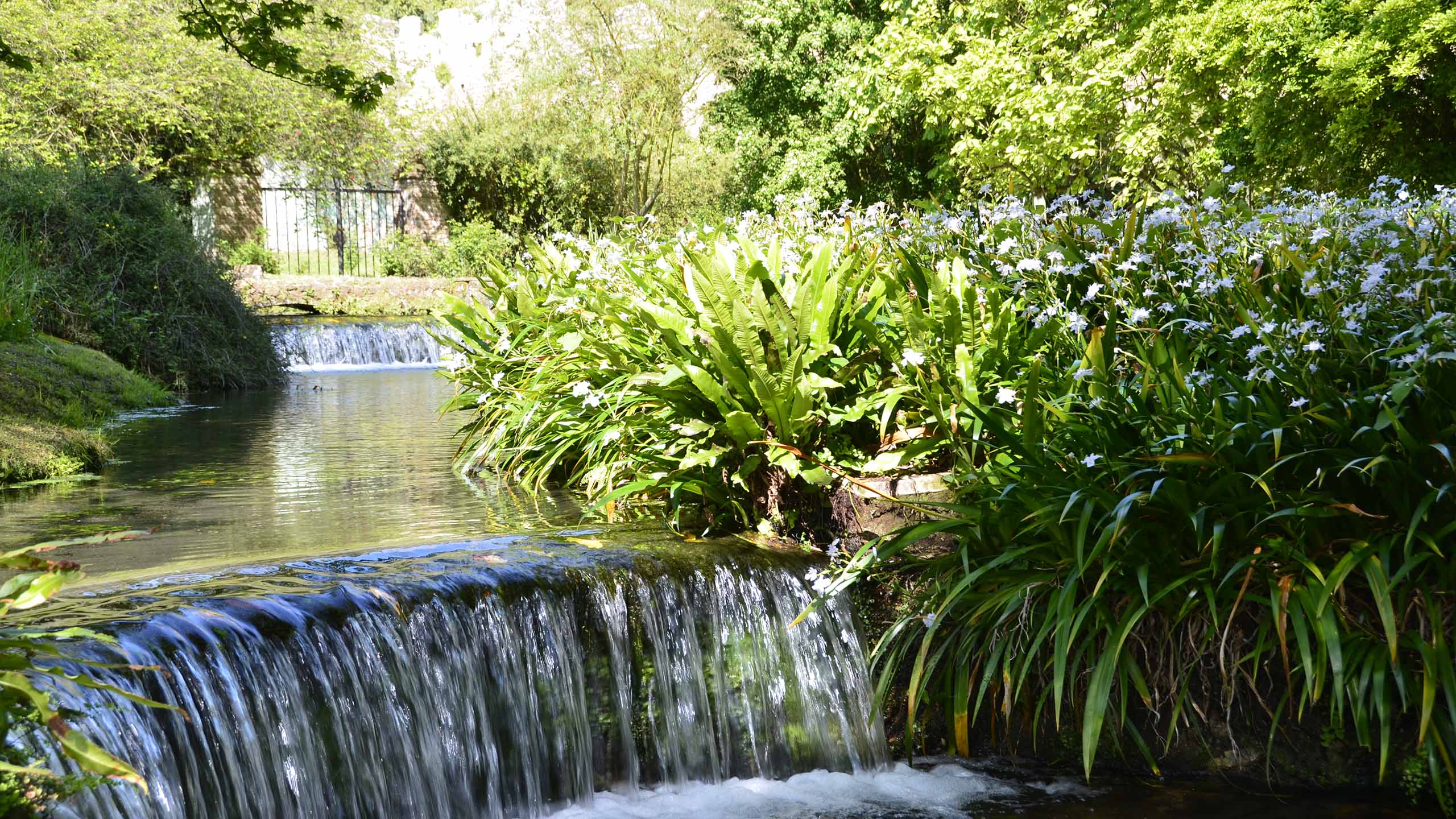 Near the Roman bridge, you can see jasmines, wisterias, and bamboos from China, Brazil, and Australia.
Each plant, even the ones coming from the farthest places in the world, can grow up there: it seems the garden has some magic power making it creating the perfect habitat of the plants.
The Garden of Ninfa also hosts 152 types of ornithological species: have a look to the sky, because you could see the travelling hawk, the Barn owl, the ardea cinerea and the lap-wing.

4. A walk around the other wonders of the garden in Ninfa
This oasis is not only a real explosion of nature: walking around the rich vegetation, you will be able to admire some old buildings, churches, ruins and mediaeval castles. During its best period of splendor, Ninfa was famous because it had more than 150 houses, religious buildings, bridges, mills, two hospitals, a castle and a town building.
There was a wall long about 1400m protecting the city, by several towers, too.
Near the lake, outside the walls, you can see the castle that was built in the 12th century, and lately enlarged.

The tower - completely restored - is 32 metres high, and it has a squared plant, crenellated by swift tails on the top.
You can't miss a tour of the most important churches: they are about 14, and the most important one is Santa Maria Maggiore’s, still preserving the external perimeter, the bell tower, and the apses.
The town was also the location of Marmosolio and Santa Maria di Monte Mirteto monasteries; the latter was built near a cave that has lately become a pilgrimage destination.
Finally, take a look to the bridges crossing the river: one of them is named Macello - that means slaughterhouse -, because it seems it was situated near a building where meet was butchered.