If you are staying in Rome or you are planning a short trip to the Eternal City, you cannot miss a visit of the Domus Aurea, the immense building Nero built, one of the symbols of an ancient civilization. Well, this evidence of Rome is still under restoration - it should be completed in 2022 -, but thanks to new technologies, it will be possible to travel across the time, admiring how the building was in the first century A.D., before Train demolished it, to make it his own thermal baths. Despite the restoration site is open, the Domus Aurea and its multimedia tour will be available for a tour - 25 people per time - during the weekends (Saturdays and Sundays), until August 26th, 2018, by reservation. The ticket price is €14, plus €2 for reservation and guided tour. You will discover the colonnade, the garden, the breathtaking show of the rooms decorated by marbles, frescoes, and works of art Nero pretended to have there to decorate his enormous building.

History of the Domus Aurea
In 64 A.D., a terrible fire affected Rome, destroying a great part of it. One of the destroyed buildings was the Domus Transitoria, so that the Imperial building where Nero lived. After the disaster, Nero ordered to build a new royal palace, to represent his greatness. And so, here you are the way the Domus Aurea was built, four years later. It took this name because it was characterised by golden decorations, and jewels on the ceilings. More than a house, it was a sort of city. It stretched from the Palatino to the Esquilino hill, on 2.5 square metres that means about 80 hectares hosting houses, vineyards, woods, animals, and an artificial lake - where the Colosseum was lately built -, a great statue representing Nero wearing Sun God robes, long avenues with trees, balconies, and pools. But Nero took advantage of his big estate only for a few time, because he was accused and condemned to death, as responsible of the fire, a few time later. Due to an historical habit connected to the “damnatio memoriae” - the idea of cancelling history and what a dictator did -, the residence was destroyed and part of it became Train’s thermal baths. 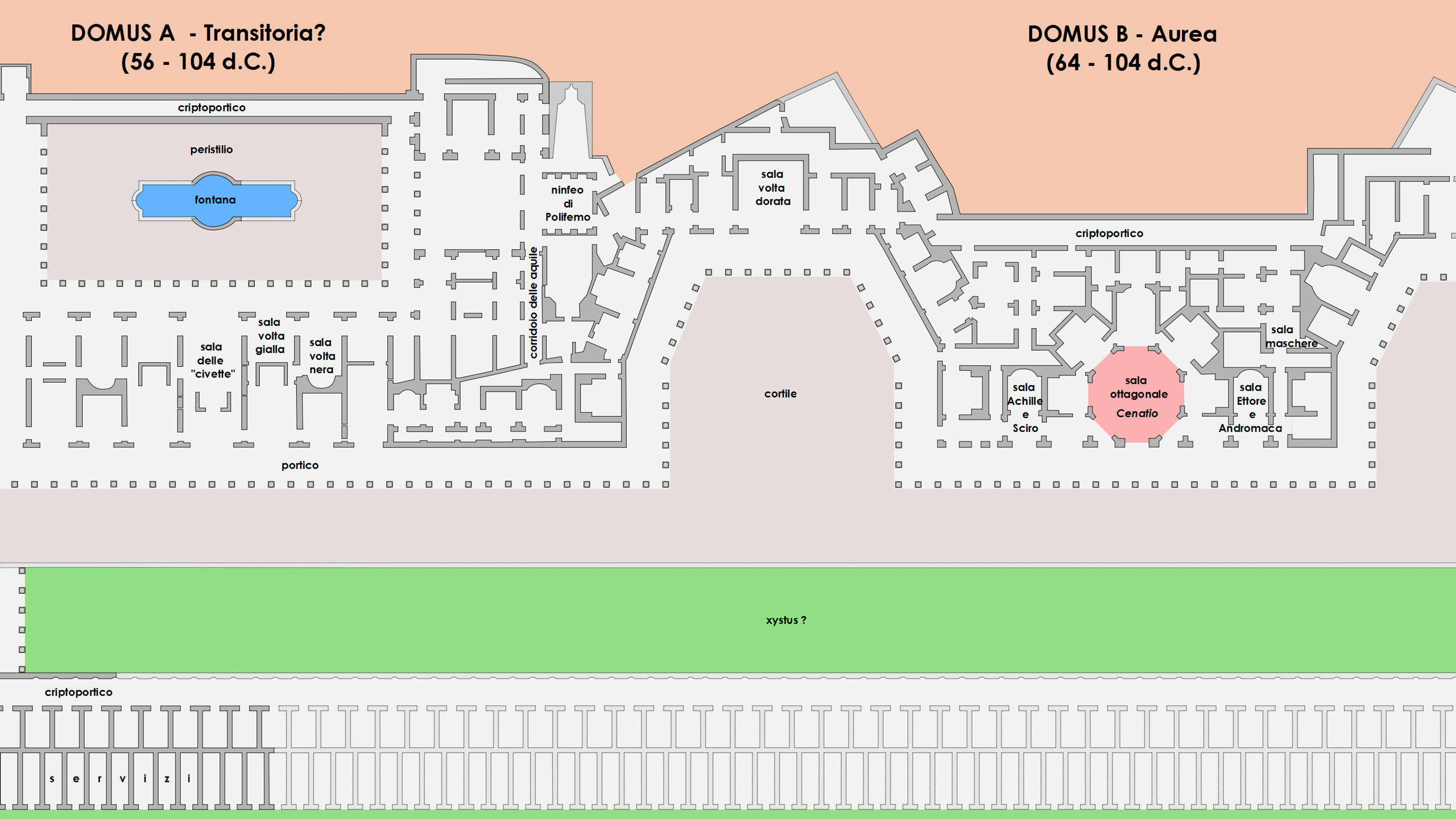 Quello che resta della Domus Aurea The Domus Aurea remains
What you can now see is situated in the great Eastern area, on a 300 metres long and 50 metres large surface, in Oppio hill. It is a luxurious building, with 153 rooms around an octagonal one, representing the focus of the whole work. This building is divided into two sectors. The one in the West has a courtyard and a ionic colonnade, facing on the private rooms, such as Ulysses and Polyphemus nymphaeum, and the owls room. The Eastern area instead had hobby spaces: two courtyards, the golden vault room, Achilles, Hector and Andromaca's rooms.

Anecdotes about Nero's residence
The revolving room (or caenatio rotunda) is one of the sumptuous peculiarities of the Domus Aurea. It is a circular room with a wooden floor on the water. Thanks to a sophisticated engineering architecture, consisting of a wheel and a system of bearings, the room turned on itself by day and by night, imitating the rotation of the Earth. In addition to it, the golden ceilings allowed the fall of flower petals and scents, thanks to their particular composition, while guests took advantage of sea and sulphurous water, as all the toilets were provided with it. Nero, however, was a great lover of the Greek culture, so you can find statues and works of art from the classical culture and Asia. These wonderful discoveries - including frescoes by Fabullus - were found when a young Roman man fell into an underground part of the Domus, during the Renaissance era. Artists such as Pinturicchio, Raffaello and Michelangelo immediately went to see what the mysterious cave was hiding. They found works of art and wonderful decorations. The archaeological excavations brought to light more and more monuments, by the time. The Domus has been closed to the public for a period, but during the last years it is available again.

The new 3D installation
The 3D journey across the time starts by a video story about the Domus Aurea, across the original building Nero planned to build, then Train's destruction, until the Second World War, when the building became a refuge. After this introduction, you enter the Golden room, to play the role of Nero and discover his enormous house, by a stereoscopic viewer. 25 Hi-tech emplacements have been installed - that's the reason why only 25 people can enter per time -, to bring you in the virtual environment of the house, in the way it was in the first century A.D. You will discover the beauty of the worlds, the frescoes, the pictures, the marbles, the Golden vaults, the gardens, the pools, the columns, and everything was in the building, in all their details. The hard vision approximately lasts 6 minutes: a few but significant moments, during which you will really feel to be ancient Roman citizens. A tour in the hidden Rome, characterised by emotion and discovery, in a place that has lived 2000 years underground, now available in three dimensions to astonish you.