Piazza del Popolo, a meeting point of cultures and a stage for great events

It's not a secret Piazza del Popolo is one of the biggest squares of the Italian capital, everybody knows it. Throughout history, Piazza del Popolo has hosted many important historical events, and it is one of the most famous squares in Europe. The reason why it is called “Piazza del Popolo” is still uncertain.
The majority of historians agree saying the etymology of the name comes from the term "populis", that means poplar. The Roman tradition actually tells about a peculiar legend, telling a little wood of poplars was set in this area where the tomb of Emperor Nero was built. It seems the area was loved by the famous emperor, because of the spectacular landscapes you could take advantage of at the time. Concerning historical events, we have to remember Pope Pasquale II built a church next to the walls.
The square - actually a masterpiece - was built thanks to the people's efforts. Church of Santa Maria del Popolo. The square next to it soon became the famous Piazza del Popolo, as the name of the close church of the Holy Mary was. 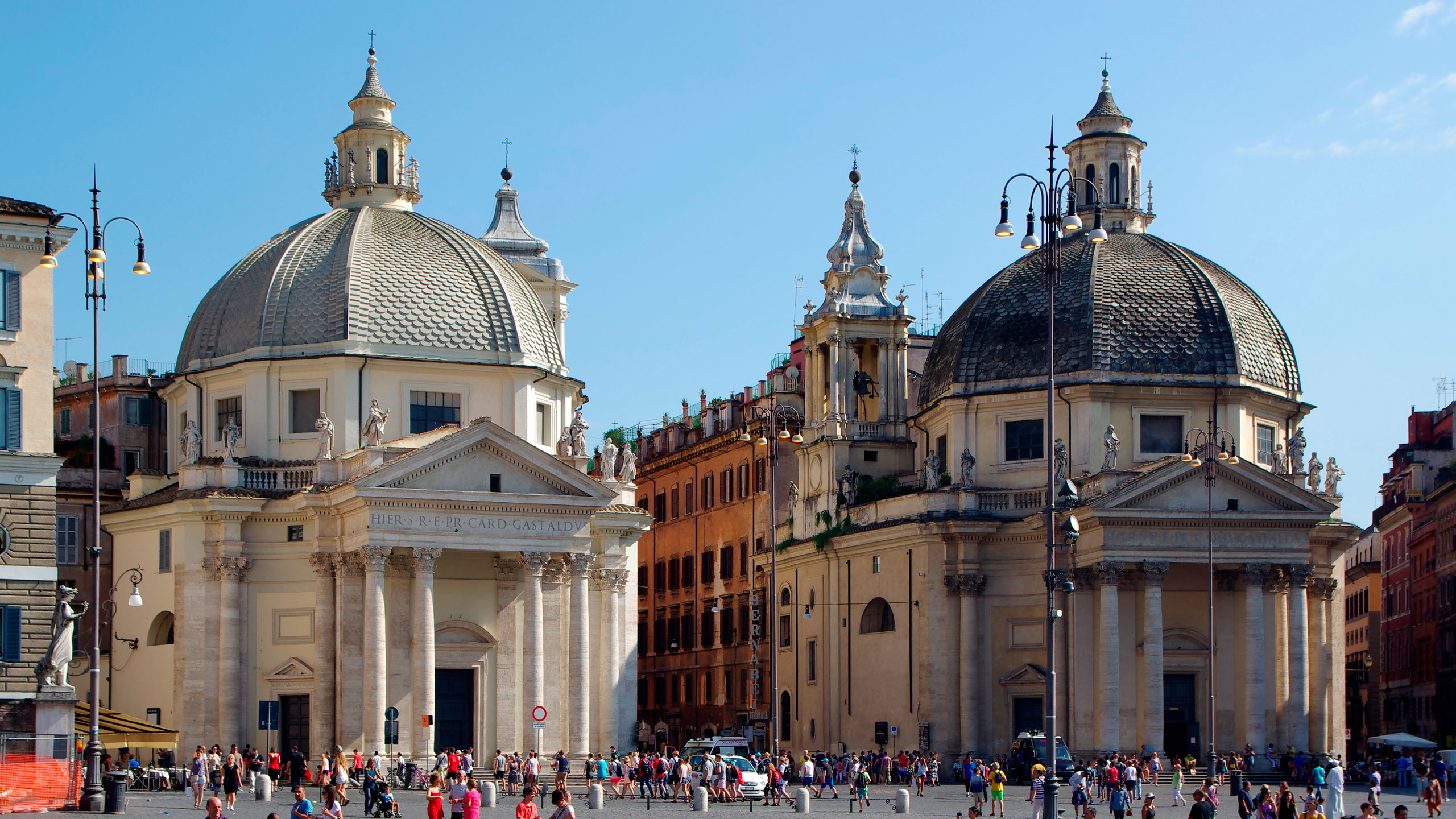 The majesty of Piazza del Popolo architecture.
The famous door was lately added to the square: it represents an example of architectural elements stratification. The phenomenon went on by the time, even with the following Popes, who tried to make the structures more modern, reworking architecture. Thanks to the Popes' efforts, you can see three churches in Piazza del Popolo: Santa Maria del Popolo - built by Pope Pasquale II, then rebuilt by Pope Sisto IV - and the two twin churches, Santa Maria in Montesanto and Santa Maria dei Miracoli. In Piazza del Popolo, there is also a majestic obelisk. It is the Obelisco Flaminio, there thanks to Pope Sisto V.
The obelisk is 24 metres tall, made by two pharaohs: Merenptah and Ramesse II; it was lately moved to Rome by Emperor Augustus. Before being put in Piazza del Popolo, it was put in the Circo Massimo. Piazza del Popolo took its current aspect only at the end of the nineteenth century, after the changes occurred by the time - such as Napoleonic Wars in Italy. Many different architects taking part to the realization of the square left the signature, so that you can see the result of different styles and influences.

The fountains in Piazza del Popolo
The fountains in the square deserve a reflection. They got renewed in 1823, thanks to Valadier - a very appreciated architect, at the time. He gave an artistic but even futuristic vision of one of the fountains structure - actually the fountain of Piazza del Popolo. According to the historians, Giovanni Valadier only collected the idea of Pope Sisto V of building a central fountain, setting four marble lions on its four corners, from where water comes out. Lately, other two twin fountains were built on the sides of the square: both have a similar tub.
On the wall of each fountain, in front of them, there are also dolphins with braided tails. The only one difference between the twin fountains in Piazza del Popolo is the group of status in the middle of each one of them. The western fountain - the one near the Tiber - costs Neptune statue, surrounded by dolphins and tritons. On the Western Eastern side, in the middle of the fountain ladies goddess Rome, surrounded by the statues of the Aniene river and the Tiber.
At its feet, there is the typical Roman was feeding the twins. In the past, there was also a connection between Piazza del Popolo and the Pincio. It was decorated by a majestic fountain. They lately understood it was not in relation with the order decorative elements of the square, so it fell into disuse, and then forgotten. Nowadays, we can observe the remains of the connecting ramp, telling us about those distant historical events.

Piazza del Popolo restyling
As you can easily understand, Piazza del Popolo has been restored many times until its current conditions. In addition to the architects interventions, even the Citizens took part to its modernization. For example, between 1878 and 1879, the towers on the side of the entrance door were demolished.
The towers were used to protect the door, but they occupied a lot of space. After the events of Porta Pia's breach, a new way to access the square was built, after the reconstruction of Ponte di Margherita - between 1886 and 1891. The last and maybe the biggest intervention was done during Fascism - in 1936 - after the organization of the exhibition for the Virgin aqueduct under the Pincio. At the time, the intervention needed many experts and great investments.

Piazza del Popolo nowadays
Nowadays, the square is 16000 square metres large. Many public events take place there. It can host 65000 people. In addition to the churches, also the Carabinieri central station is situated there. The barrack is set into the Augustinians convent, currently the basis of the Vatican police officers. There are also many stands where you can buy typical souvenirs in the square. You can also taste the typical Roman food, in some of the restaurants around there.