Roma at the table: guide to the most authentic trattorias in Rome, to taste its genuine traditional food

If you are in Rome or planning a trip to the capital, you will surely be well informed about cultural and artistic events as well as about monuments of historical interest. However, you must not forget the great importance of enjoying the most authentic and true cuisine of the city, made of simple ingredients of peasant origin and discarded in antiquity by nobles and local farm-to-table products.

Far from the tourist chaos
If you want to understand the origins of the popular Roman cuisine and how it has evolved over time, becoming an example for many other countries, it is good to choose the right restaurants. These are often far from the tourist chaos, some of them hidden among the alleys and they are very different from the typical elegant restaurants of the city. However, as soon as you cross the doorstep you enter an environment rich in colours, sounds and scents belonging to Rome and to the Roman cuisine, with popular origins, actually the most authentic and true.
The places proposed often hand down the recipes of the past, and they offer abundant portions that have nothing in common with the formal and gourmet service of the restaurants in the historical centre. Finally, all the most authentic taverns in the city are characterized by an informal service, by an excellent quality/price ratio even considering the absolutely abundant courses, and by a wine list of local production.

Where to taste the best traditional first courses
If you want to taste the first courses by the Roman tradition, perfectly cooked, following the authentic recipe handed down from mother to daughter among the generations step by step, then you must take notes about the following addresses. The first is Flavio al Velavevodetto's tavern, located on the slopes of Mount Testaccio. Opened a few years ago, the chef Flavio left the kitchen of the famous Felice restaurant in Testaccio to dedicate himself to a project of his own. In this place, you can taste one of the best Cacio & Pepe in the city, made with Tonnarelli pasta as tradition demands. However, there are also Rigatoni alla carbonara, Gricia, broccoli in Skate fish soup and pasta with chickpeas. Another name is Armando al Pantheon, a place known throughout Rome as it is a safety in terms of successful dinners and local food. Traditional first courses are excellently made there too. Among them, we recommend Spaghetti alla gricia and Pasta all'amatriciana.
If you are very hungry, we recommend you the Picchiapò boiled meat. Felice al Testaccio is perhaps the local reference point for Romans. Located in Via Mastro Giorgio 29, it is considered a real institution: not only first courses are famous, but the entire menu. The Tonnarelli cacio e pepe are finished and creamed directly in front of the guests. Spaghetti alla carbonara, mezzemaniche alla gricia and bucatini all'amatriciana are not missing too. Even the second courses are faithful to tradition, with a vast choice of Coratella with artichokes, Roman-style tripe and cow-tailed tail. Finally, the trattoria Il Girasole, in Monti district is one of the most authentic in Rome. Portions are served generously, the atmosphere is warm and the service is informal. The most desired dish is Spaghetti alla carbonara, cooked according to tradition with cheeklard, so making the dish fantastic. 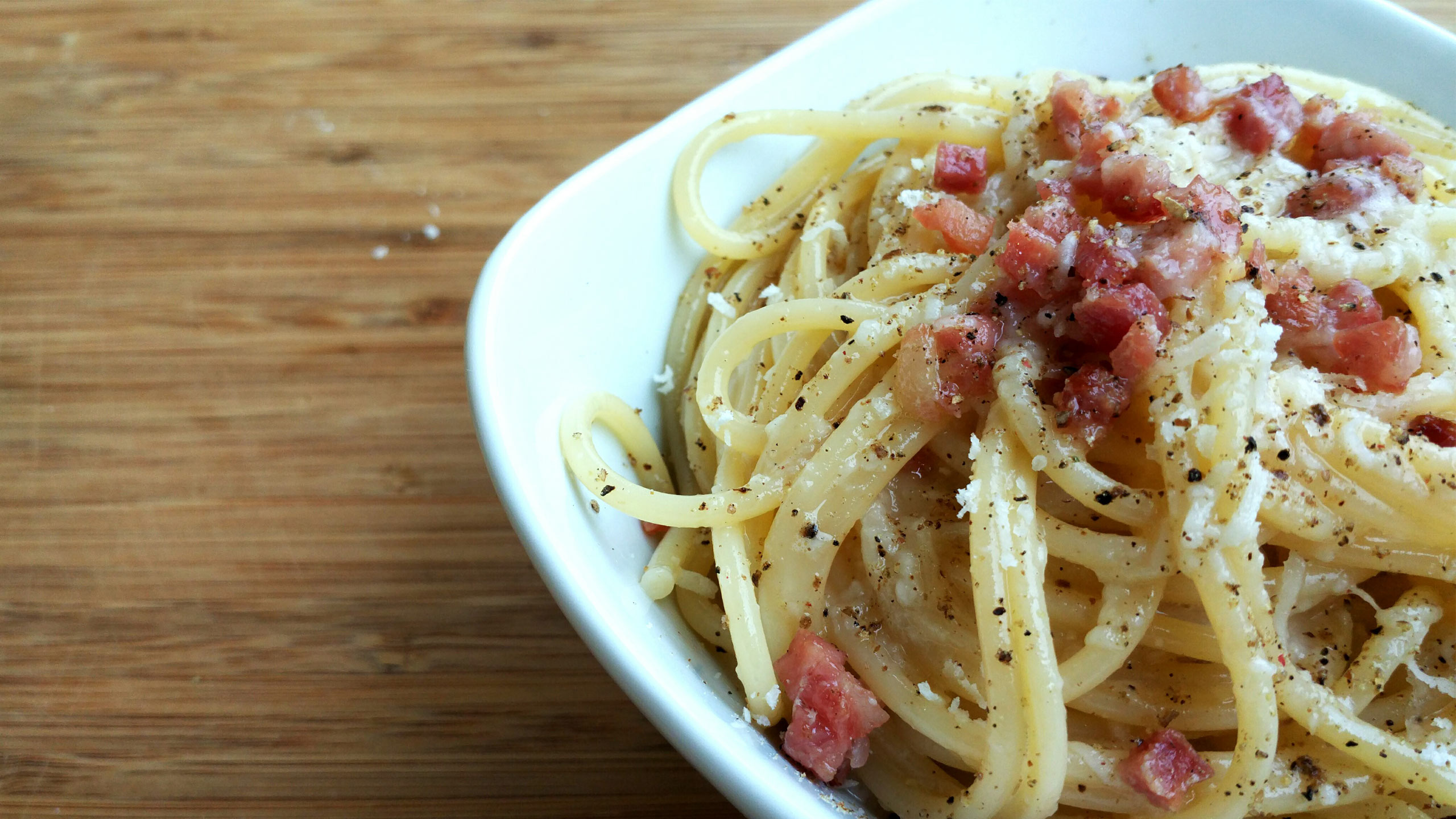 Where to go to taste the second courses of the Roman tradition
The second courses of the tradition are the symbol of what in the past was the poor cuisine: the noble people were actually not interested in the so-called the "Quindo quarto", that is the remains of meat wasted by the favourite cuts. Poor people so began to cook ingredients such as the tail (Coda alla vaccinara), the tripe, the offal (the Pajata) and the Coratella. Nowadays, they are the most desired second courses by the tourists, in addition to be the favourite food of the citizens, and the ones best expressing the traditions and the culture of the city. The best trattorias where you can taste second courses cooked according to the ancient recipes are: The Quinto Quarto, the Scopettaro, Checchino dal 1887 and Betto e Mary.
Let's start from the Quinto Quarto, located in Via Flaminia Vecchia 638/640, with a traditional menu that reflects the poor cuisine typical of the place. On the menu there are second courses such as tripe, sweetbreads, Coratella and the Vaccinara tail which fully reflects the name of the restaurant. The Scopettaro in Testaccio is a rustic and informal trattoria, and is considered one of the oldest in Rome. The menu is very wide in order to satisfy all customers. It obviously offers the great classics of the traditional cuisine, with peculiar attention to the execution of the most famous second courses: Coda alla vaccinara, tripe "alla romana" but also the Abbacchio (the lamb), the Coratella, muscle and Saltimbocca alla romana. In short, it is impossible to go away being not satisfied by what you ate.
Checchino dal 1887 is also a benchmark for lovers of good food. In via di Monte Testaccio 30, there is a welcoming and historical environment. The restaurant has two rooms and an outdoor space. The menus are differentiated to give vegetarians the opportunity to feel at ease in this trattoria. However, it must be said that Checchino dal 1887 won the first prize for the cuisine of the Quinto Quarto in Rome. From sweetbreads to tripe and Pajata, Checchino's cuisine makes offal the protagonist, the symbol of an almost vanished Rome. The best dishes to order are Spaghetti with tail sauce, Coratella, nerves and head. To conclude, the last genuine trattoria to be named is that of Betto and Mary, in via dei Savorgnan 99, where the substance is really more important than the appearence, and where the popular Roman cuisine reigns supreme. You start by the appetizer, with nerves, followed by a triumph of tastes and flavours with pasta with sweetbreads, the Roman-style tripe, the Vaccinara tail, the Coratella with onions, or - if in the right season - with artichokes and, finally, a real strong and inevitable dish is the Granelli fritti, the testicles of the ox, another part of the meat that once was the waste for the poor people.