Surroundings of Rome: Palazzo Farnese in Caprarola, the architectural masterpiece by Vignola

If you are in the enchanting Rome, you cannot miss the famous Palazzo Farnese located in Caprarola (province of Viterbo); it is less than 100 km from the capital and it is open every day (except on Mondays) from 09.30am to 7.30pm. This short guide wants to increase your curiosity, give you some little taste and take you on a sort of virtual tour through history, wonderful rooms, lush gardens, stables and much more.
Let the tour begin!

1. The history of Palazzo Farnese
Palazzo Farnese - today one of the most beautiful residences in central Italy - was built at the behest of cardinal Alessandro Farnese who entrusted the work to the famous architects Antonio da Sangallo and Baldassare Peruzzi. Works began in 1530, but suffered a first setback in 1534, when Farnese was elected pope by the name of Paul III. Years passed, and Caprarola became the refuge of cardinal Alessandro Farnese, the young man - nephew of the pontiff - who retired there to forget his father's death (Pier Luigi); the man fell deeply in love with these places and decided to resume the works his grandfather had interrupted. Alessandro called the architect Jacopo Barozzi da Vignola on: the latter overturned, according to his client request, the initial project.
Farnese actually desired a Renaissance styled palace (and not the fortress originally designed): the pentagonal external shape was preserved, the courtyard became circular and the ramparts were replaced by large terraces and gardens. The works, started in 1559, involved architects, but also painters: the rooms of the palace were actually enriched by elegant frescoes signed by famous artists.

2. The interior of Palazzo Farnese
The building, having a pentagonal plan, is built on a base to house a fortress and raised following a precise pattern: the interior spaces are actually strictly divided into two distinct parts (the summer area in the north and the winter in the west) and there is no communication between the servants' wing and the one reserved to the master. The building is divided into basements, raised ground floor (or Prelate), noble floor, floor of the Knights and floor of the grooms.
The first, accessible by opposite square, is the access point for the carriages, and it is composed of a kitchen, warehouses and services for the butlers; the second, accessible by an internal or external staircase, is composed of several rooms including the Stanza delle Stagioni (the Room of the Seasons) with the frescoes recalling Jupiter, and the Stanza delle Guardie (the Room of Guards). The most interesting plan interest surely is the noble one: the entire wing is divided into two apartments and inside if them there is the Cardinal's bedroom (Camera dell'Aurora, the Room of the Aurora) and the room of the Fasti Farnesiani, telling the history of the Farnese family by its frescoes. Then, you can see the antechamber of the Council (the name of this room, entirely dedicated to the pontificate of Pope Paul III, recalls the Council of Trent wanted by the Pope himself) and the Sala di Ercole (Hall of Hercules); the latter, with a splendid lodge, gives a wonderful panorama, whereas the frescoes on the walls describe various mythological scenes. The real pride of the noble floor is the Stanza delle Carte Geografiche (the Room of the Geographical Maps, or of the globe), where there are many representations (geographical maps of the continents, terrestrial globe, Italy and Judea); looking up at the ceiling, you can instead admire a reproduction of the Zodiac.
Other worthy atmospheres of famous are the Nail head (fresco to it on the time resume some steps of Old Testament), the Stanza dei Sogni (the Room of the Dreams or the angels messengers) with the bedroom of Alexander Farnese and its decorations emphasize the strait tie between the celestial man and forces, the Stanza degli Angeli (the Room of the Angels), about Victoria of the good on the evil, and the Stanza della Solitudine e dei Filosofi (the Room of the Solitude or the Philosophers), where Alexander Farnese used to take refuge when he needed to meditate on important topics. Finally, the main floor allows you to enjoy a splendid view of the circular courtyard whose design is by Vignola, whereas the frescoes on the vaults are by Antonio Tempesta.
The last two floors (for the knights and the grooms) do not have any or artistic relevance; they actually are environments reserved for staff of the residence.

3. The Scala Regia
The helicoidal spiral staircase of Palazzo Farnese - the Stairs of the King - designed by Vignola and frescoed by Antonio Tempesta, connects the basements to the upper floors and it follows, in a certain way, the analogous structure built by Bramante in the Vatican (the octagonal Belvedere courtyard). Its role inside the building was, however, completely distorted: the spiral stairway, generally for the passage of servants and guards, became a point of passage for everyone.
There are also two fun facts: it is said the steps were low to allow the cardinal to reach his room on horseback, but there is no evidence of it (there are no signs of hooves on the stairs); the frescoes, which you admire, finally recreate the history of the Farnese family since its origins.

4. The gardens and the park
You cannot leave Palazzo Farnese without getting lost in its wonderful gardens. The entire area was designed by Vignola, Giacomo del Duca and Girolamo Rainaldi who receivedthe task of transforming the area surrounding the fortress into a park designed to accommodate guests and visitors. The architect so realized two gardens (a winter one and a summer): the first, facing south west, culminates in a large cave in the tuff and into a pool with sublime water games, as the second, oriented to north east, hosts a delightful portico, beloved by Farnese. 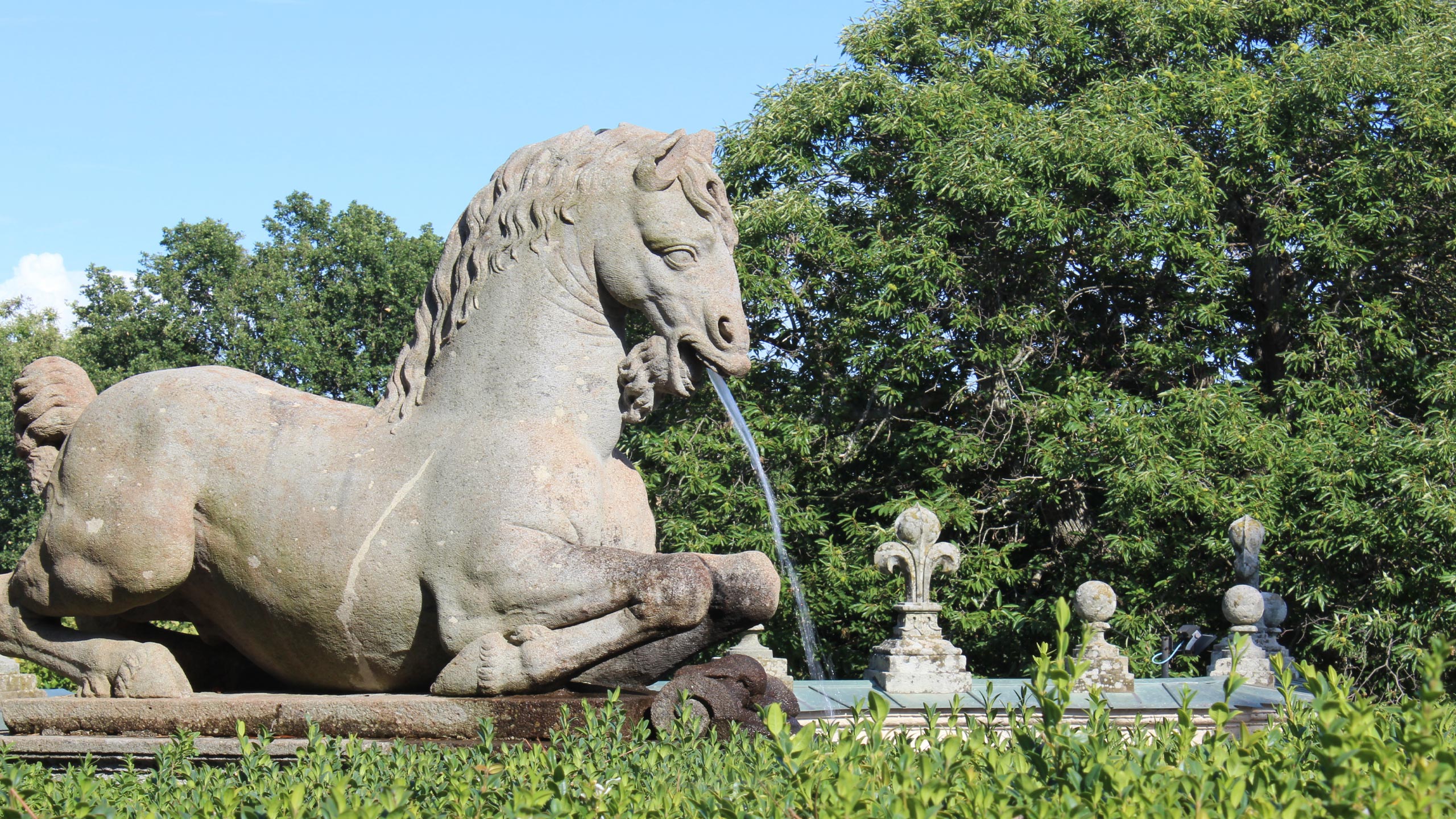 5. Conclusions
Our virtual tour of Palazzo Farnese ends, but yours is still all to write and live. There are so many places to see: the interior gives you unique emotions with enchanting frescoes, while the park awaits you for a relaxing walk.