Surroundings of Rome: Via Francigena, the ancient road of the pilgrims

If it is true all roads lead to Rome, it is also true one more than any other is the emblem of this statement: the Via Francigena. If you are planning a short stay in Rome, you may experience a short section of one of the most famous paths in Italy and Europe. Also called the millenarian road of the pilgrims, the Francigena has a history more than one thousand years long. If you would like to discover something more about it, read this article dedicated to the path of faith, known in modern times as "Romea".

The route of the Via Francigena
Via Francigena starts in Canterbury, the site of the Anglican church and community of supporters. From the cathedral of Canterbury, pilgrims travel along the ancient Via di Fiandra, crossing part of France and arriving in Lausanne, the current Switzerland. From Lausanne, the route continues towards the Gran San Bernardo mountain, till Aosta, Ivrea, and Vercelli. From Piedmont, it goes along the Po River, till Piacenza. From there it descends along the Via Emilia, reaching Fidenza.
Crossing the Apennines through the Cisa Pass, it gets to Lucca, one of the most important steps of the route, as there is the Holy Visage the pilgrims used to consider the real face of Christ. The following stages are Saint Genesio and Siena. You should know Siena, by virtue of being one of the most famous of the Via Francigena, during the middle ages experienced an unprecedented population and economic expansion. After Siena, the Via Francigena continues to San Quirico d'Orcia, and from here on, you get to the final stage of the route. Once after San Quirico d'Orcia, the pilgrims head towards Rome, along the route of the Cassia, the ancient consular way, made by consul Cassio Longino, still joining Florence and Rome today. The last stages are Viterbo and then Sutri. 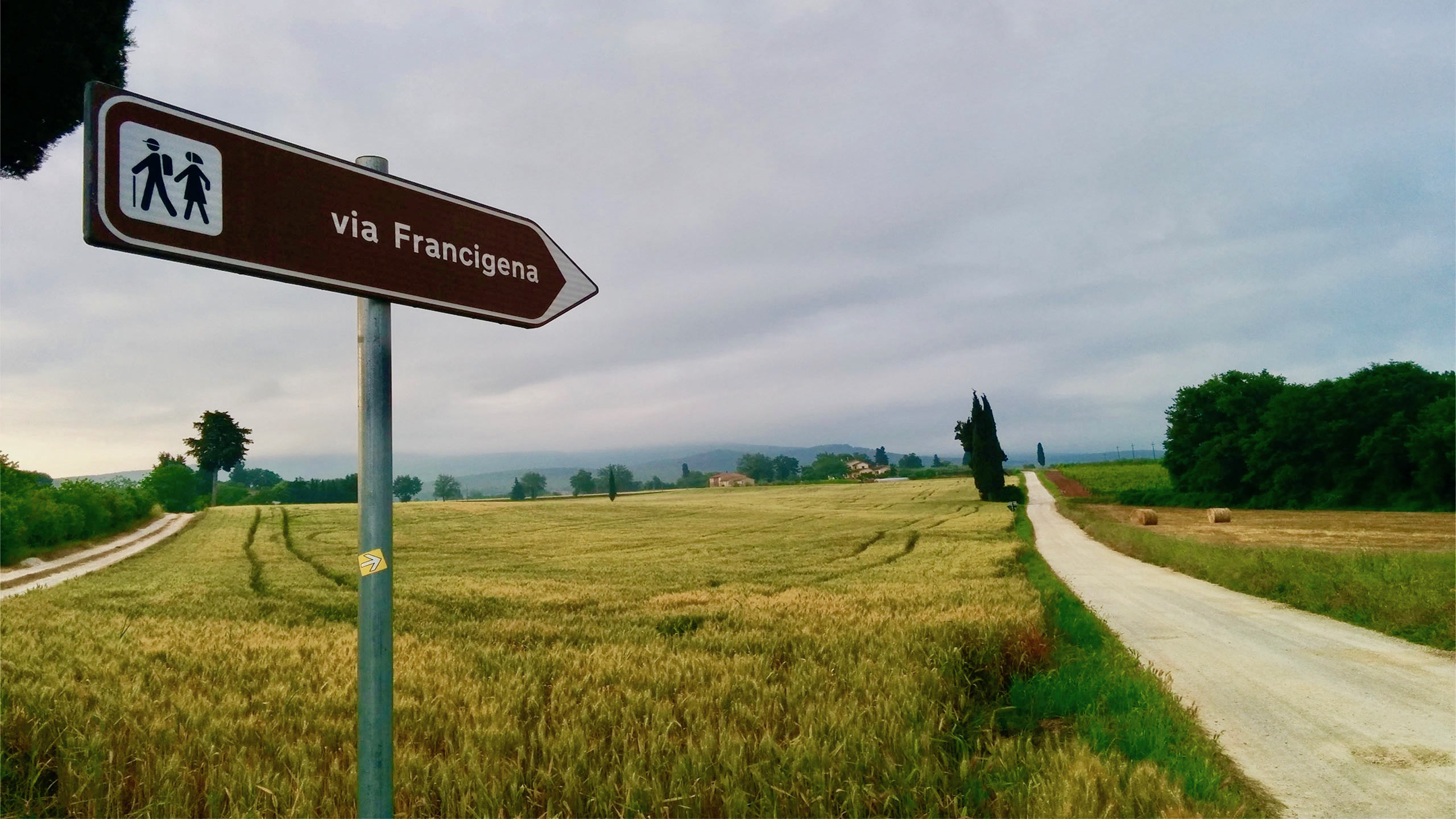 Who is Sigerico di Canterbury?
Sigerico - archbishop of Canterbury - made the most detailed per diem travel diary during the journey he did in 990, at the end of the first Millennium after the birth of Christ. The rich details in the document made possible the realisation of the first official route of the Via Francigena. The diary of Sigerico is made of 80 stages, from the cathedral of Canterbury till the Basilica of Saint Peter to Rome. Four years after the journey in the via Francigena, the English archbishop died.

The Via Francigena in Rome
The city of Rome is the final stage of the Via Francigena. The last stage of your walk is the Basilica di San Pietro, the most important Church of the entire Christian community. Before reaching the Basilica and the tomb of the Apostle Peter, you can enjoy a spectacular panorama from Monte Mario, one of the final stages of the glorious Via Francigena. From here, imagine even just for a few moments the scenery of a medieval Rome through the eyes of a pilgrim at the time.

The Via Francigena in Rome
In the past, the Via Francigena was crossed by thousands of pilgrims every year, who - following the path of Sigerico - reached Rome and Peter's tomb. During the middle ages, however, some of those pilgrims - after having visited the Eternal City – decided to continue over Rome, reaching Puglia region. From there, they departed for the Holy Land, towards Jerusalem. In this case, the Via Francigena represented only a first stage of a larger itinerary. From Rome to the port of Brindisi, the pilgrims followed the path of the Appia, one of the most important consular roads built in the Republican age.

Via Francigena and Via Romea
Are you wondering if Via Francigena and Via Romea are the same routes? The answer to the question is Yes, although we should explain you why. From the beginning, the path crossing the entire Europe was called Via Fancigena, but because of the numerous routes developed in the meantime, it lost the uniqueness had distinguished itself from the beginning; for this reason, it took the name of Via Romea, referring to the Italian section from the Gran San Bernardo to Rome. The name Romea was chosen to indicate the favourite destination of thousands of pilgrims, during the twelve months of the year.

Travel time along Via Francigena
If you consider the distance of Via Francigena from the Gran San Bernardo to Rome as your benchmark - the common route the pilgrims carry out inside of the Italian territory - you should calculate a one thousand kilometres long distance. If you choose to walk along the Via Francigena on foot, it should take approximately 45 days, more or less a month and a half of walk. If instead you like the bicycle and you have a remarkable resistance, it should approximately take 15 days, saving therefore a month. In alternative, you can decide to split the way into two times, on foot for first and then by bicycle.

The best period for the Via Francigena journey
The best period to complete the route of Via Francigena is the spring or the second half of September, when the temperatures are still warm and the risk of precipitations is relatively low. We advise you not to make this route in the summer, because of the high temperatures recorded in the Italian regions, such as Liguria, Emilia Romagna, Tuscany and Lazio. Similarly, you should quit the road in winter, because of the prohibitive temperatures in some places of the route and frequent heavy rainfalls occurring in this period throughout Italy. You should therefore prefer the month of May and the period from mid-September to mid-October if you want a sunny journey and mild temperatures.