The Arch of Titus: the last work of the Flavian Dynasty

What is the Arch of Titus?
The arch of Titus was commissioned by the Roman Senate to remember the emperor with the same name dead in 81 A.D., and his victory during the Jewish war in Galilee. When Vespasian came back to Rome in 69 to take the throne, he charged his son Titus to end the struggle in Judea. The following year, the conquest of Jerusalem and the destruction of the temple led to the end of the war, and the young prince could celebrate his triumph in Rome in 71.
Tito ruled for only 3 years, but was called "the delight of mankind" and the arch was built in his memory, partly because he had not had time to deal with the construction of monuments to celebrate his deeds. Over the centuries the Arch of Titus has undergone various vicissitudes.
In the Middle Ages was incorporated into the Frangipane's fortress and then to the convent of Santa Maria Nova (now Santa Francesca Romana). The first restoration works began in the 16th century, by order of Pope Sisto IV, and Paolo II, but only between 1812 and 1824 a real carefully planned enhancement of the monument was done. The restorations were directed by Giuseppe Valadier and Raffaele Stern, who eliminated the medieval structures. Between 1901 and 1902, new interventions took place to lower the street level and bring to light the flooring of the Augustan age, discovering suspended foundations.
You should know there was another arch of Titus, now disappeared: it was 10 metres tall, 15m deep and 17 metres large, situated in the Circo Massimo. It was lower than the one situated in the north of the Palatino hill. The arch of Titus actually is 15,40 metres high, 4,75 metres deep, and 13,50 metres large. 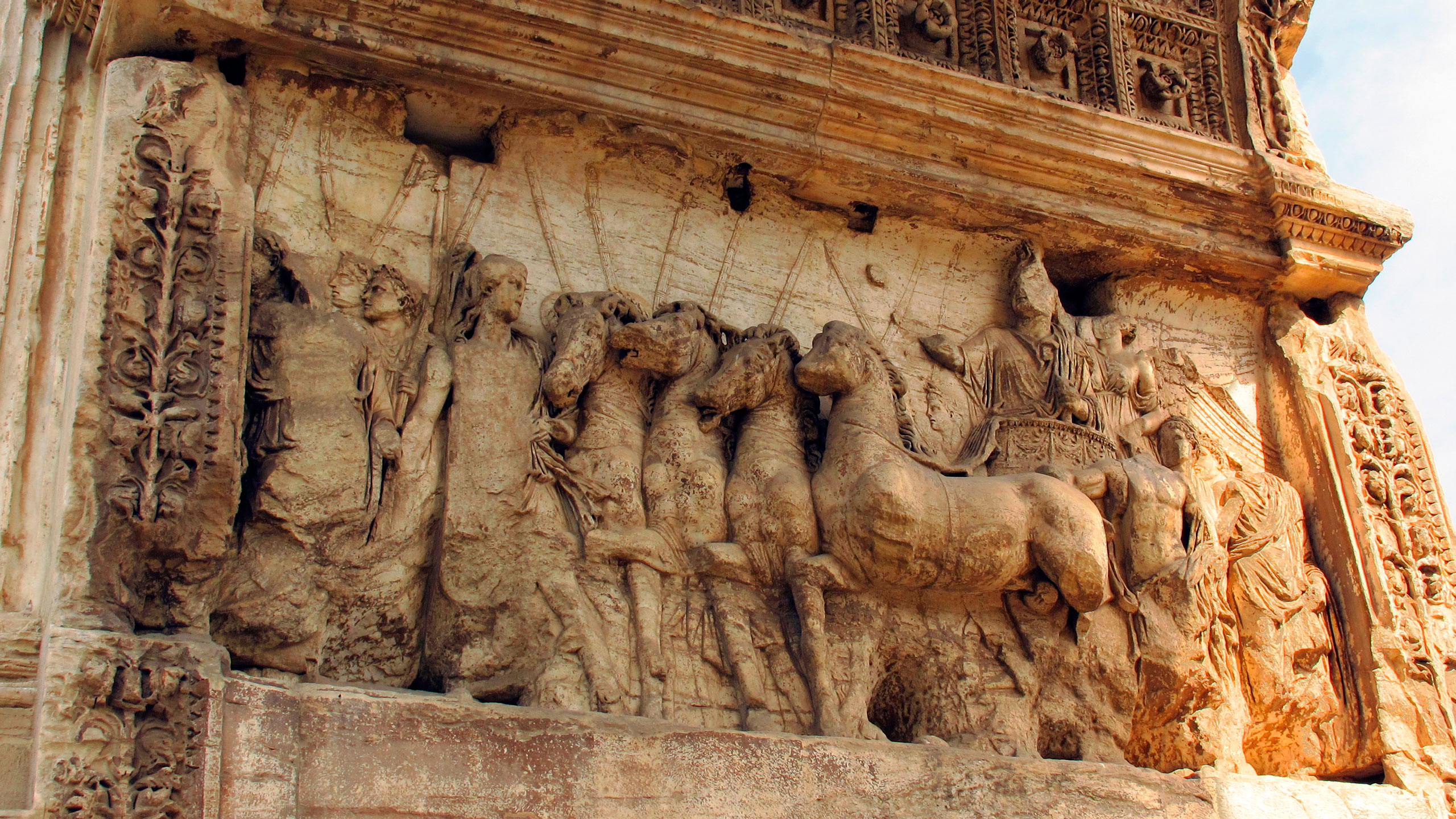 Structure and covering
It is a triumph arch with just one fornice situated in the Western area of the Fori Romani. It is the symbol of the Flavian Dynasty, because it is a masterpiece by the Roman art, characterised by innovative architectural features, especially concerning the decorations and its structure, and because it is the last very important work the family commissioned.
On the West side, facing the Fori Romani, you will see the attic with the inscription and the dedication to Titus by the Senate. The date when the works ended is unknown, but they probably took place between the 85 and the 90. Titus was actually called the "divus", fact that demonstrates it's a work made after his death. Compared to other triumphal arches from the Julio-Claudian era, this monument has a more compact and robust structure, similar to the one of the Arch of Susa.
This is an important difference, because it allows to clearly distinguishing this style from the models influenced by the Hellenistic architecture. At the same time, it is the first example of a composite capital definitely very old, in the Eternal City. The work is made of columns around the 4 sides to enhance the building and it is completely covered by Pentelic marble on the top, and Lunens marble on the bottom. The inner part is made of concrete and travertine, discovered during the 19th and 20th century Restorations.
The fornice is surrounded by half columns used to support the entablature.

The sculptures
The Arch of Titus is completely decorated by sculptures and reliefs to celebrate the Emperor's victory in the Jewish war. The entablature has a wonderful decoration showing the scene of a sacrifice, similar to the Ara Pacis model.
The decoration is characterized by unreal and dis-organised elements enhancing the symbolic aspect on verisimilitude. The animals are actually much bigger than the people bringing them to be sacrificed. On the sides, there are commemorative panels remembering Titus’ victory and triumph. On the Northern side there is the emperor crowned by Victoria goddess. The chariot is accompanied by the genius of the Roman people and the personification of the city of Rome - according to some scholars, the figures represent the Senate and people of Rome - and is led by Virtus. Behind the chariot there is the triumph procession.
It is a conventional depiction, but it has several stylistic and decorative innovations. First, the scene is much more crowded than the previous decades, and the images don't follow a straight evolution. The figures are situated in a very realistic way in the space. On the left side, for example, where is the moment when the emperor enters Porta Triumphalis together with his troops, to march around Rome. The scene is represented in a particular perspective, where the protagonists show the war spoils.
The decorations of the temple in Jerusalem are very well depicted, to show they sacked it before destroying it. You can distinguish the silver tombs, the holy vases, the table of the bread and the seven arms chandelier. The servants kept plaques telling the names of the cities they conquered during the war, and the list of the spoils. Compared to the Hellenistic low-reliefs, this work better gives the impression of the movement.
The characters are not static but depicted on a line giving the impression they are moving themselves. The procession, on the contrary, takes place along a prospective curve: on the right, you can see the backs of the characters, while they are entering the Porta Triumphalis, and on the left you can see their faces or profiles. Also the fornice vault is richly decorated.
The surface is decorated by coffers and, in the middle you can see a panel representing the apotheosis of Titus. His deification after his death is symbolized by his ascent to heaven flying with an eagle.