The Colosseum: one of the 7 modern wonders and the unquestioned symbol of Rome

UNESCO World Heritage. Third new wonder of the world for the NOWC. The biggest amphitheater of the world. Symbol of the glorious and bloody imperial past of Rome and what everyone, old and young, Italians and foreigners, think about whenever they hear the name of the eternal city.
Among the countless architectural masterpieces and monumental works of the city, only the Flavian Amphitheater is so important in the world collective imagination, symbol of the great people that built it, and of the great city hosting it.
But how about its origins? Who did build it? And above all, why is it called the "Colosseum"?


The third new wonder of the world: the origins
The history of the Colosseum has its roots in the heart of the Roman Imperial period, in 72 AD.
It was ordered by Emperor Vespasiano, to host the most impressive gladiatorial ludus of the time, to show off his wealth and munificence, and to attract the plebs with the phantasmagorical shows. The huge theater hosting tens of thousands people was dedicated to the emperor himself, in 79 AD, shortly before his death; his sons Tito and Domitian finally enlarged – the first one - and finish it – the last one.

The third and fourth order of stands and its inauguration, celebrated by a hundred days of festivities, games and shows, took place in 80 AD, under Tito’s reign; the "opera ad clipea", a series of ornamental bronze gilt shields – got lost -, the last order of wooden seats called "maenianum summum in ligneis", and all the engineering masterpieces under the basement of the arena – the huge theatrical loft once full of gladiators, wild beasts and busy slaves before they entered the scene – were built during Domitian empire.

The systems and mechanisms are remarkable both for their subtlety and effectiveness, as for the quality of the engineers who worked there: just think about the "velarium", the huge extendable curtains of the last order, used to protect the terraces from rain and sun, or to the elevators, directly placed under what should have been the stable and steady ground of the arena, very similar to the modern ones, great in assuring the movement, the appearance and the rapid disappearance of men and beasts in the arena.


The numerous lives of the Colosseum
We will not talk about the long stories about the ludus gladiators, the Colosseum original raison d'être: history books, documentaries, and films have certainly told you enough about them so that anyone knows what they were.
Its success as an amphitheater has decreased over the centuries, for a progressive diffusion of the Christian vision, till the complete prohibition of games, by Emperor Honorius, in 410 AD. He made the Flavian Amphitheater a theatre of "venationes", the hunting trips in the Colosseum. At the beginning of the sixth century, even that expensive hobby got into disuse, and the Colosseum has been no longer used as a place for entertainment, for centuries.

It has been used for completely different purposes: in the early Middle Ages, as a burial area and a castle, as the foundation of the chapel of Santa Maria della Pietà at the Colosseum tells us; in the late Middle Ages and in the Renaissance, it hosted palaces and buildings, and exploited as a source of precious marble and granite; in the second half of the eighteenth century, Pope Benedetto XIV ordered the built of the fourteen aedicules of the Via Crucis and declared the Flavian Amphitheater "a church consecrated to Christ and Christian martyrs", anyway without stopping the habit of robbing its marbles for other monuments and buildings under construction.

The robs stopped only at the beginning of the 19th century, thanks to the first restoration of the Colosseum, and to the increasing interest for the artistic heritage of the country, as it happens nowadays. 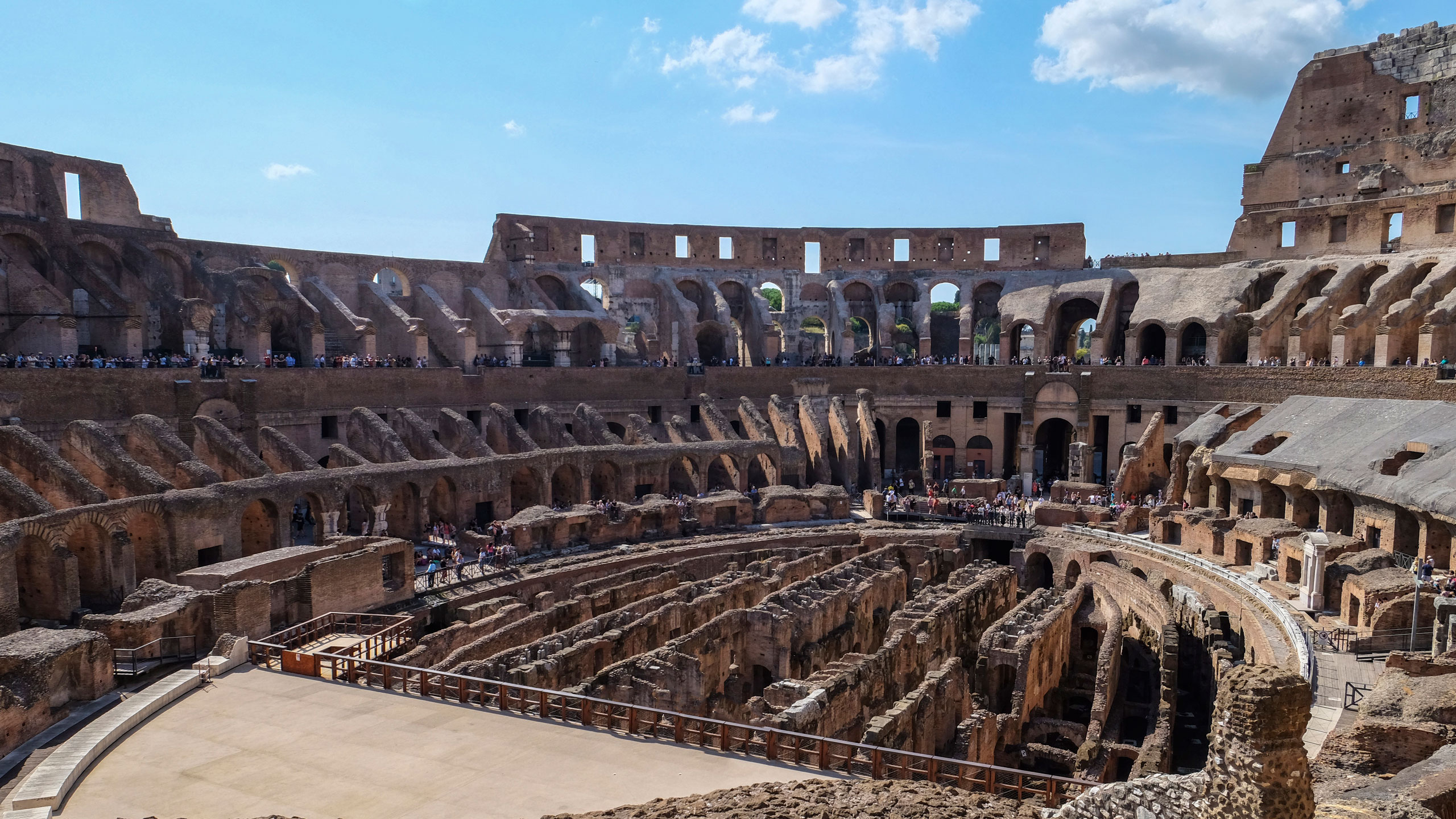 The Colosseum, miracle of engineering and art
Roman engineering was excellent, it is not a surprise, and you just have to observe the Colosseum to understand it: although it is not completely intact, it resisted to wars, predations and improper uses, till two millenniums later.

This stability is due to the expertise of the original architects, who placed the amphitheater on a platform of travertine raised above the area surrounding it; the foundations were built using a tuff basis 13 metres thick, further covered by a bricks wall, to support the enormous weight.

The supporting structure is made up of travertine pillars connected by pivots, unfortunately almost completely disappeared, because of the metals used for their forging; the wide use of arches and cross vaults allows the lower floors to efficiently support and discharge the upper floors, however guaranteeing space of movement, practicality and good appearance to the monumental complex.
The aesthetic qualities resisted till nowadays are largely due to the architecture, to the stone used, to the vaults, the columns and the surviving mosaics. Although the bronze shields that adorned the squares and many of the statues under the arches are missing, its austere and monumental aspect still inspires wonder and respect.

The origin of the second one, more popular, is more uncertain and probably following the imperial period. There are those who argue it is probably a medieval title, and due to a common corruption of the Latin adjective "colosseum" (translatable into 'colossal', as it had to appear in the Middle Ages to farmers accustomed to the maximum two-floors houses), others that owes its connection to the colossal bronze statue of Emperor Nero in his neighborhood; surely, the name "colyseus" dates back to at least the VIII century, according an epigram of the monk Beda the Venerable.

Whatever the name, it anyway is the majestic, powerful, unmistakable and unforgettable Flavian Amphitheater, an unmissable destination for any visitor of the city, who wants to admire and experience going through one of the great wonders of the world means.