The Monsters Park of Bomarzo, and its legends

If you are visiting Rome and the North area of Lazio, you can't meet at or at Parco dei Mostri di Bomarzo. You can easily get there from Rome, and it deserves a visit not only for the beauty of the place, but also for the several legends telling stories about monsters making this to even more suggestive and rich in mystery. Let's discover the secrets of the park.

What to see in the park
The Parco dei Mostri di Bomarzo includes a green area known as the holy wood of Bomarzo. It is a natural oasis made with the shape of a monstrous labyrinth where you can see statues representing soldiers, masters, goddesses, but also Chinese dragons, giant elephants, sinister houses and so on. The Park was built in 1552, by the will of Prince Orsini, who charged Pirro Logorio - the famous architect who completed St. Peters after Michelangelo's death - to realise it. According to the historical evidences, the park was built in honour of his wife, hiding a precise meaning. When the prince died, the park got abandoned, because his heirs thought it was mad. Only 400 years later, the area was completely recorded by the will of Bettini's family: they made an important restoration, recovery of vegetation and animals, finally offering to the fascinated visitors of this wonderful Park. Thanks to a great restoration, today you can admire the splendor of the stone statues representing mythological characters, such as Hercules, a nymphaeum and the Three Graces, the winged horse Pegasus, and an enormous elephant bringing a heavy tower, once again. There is also a statue representing a monster opening the mouth with bad eyes: today, it is the symbol of the park itself. The last thing you will see it is the temple dedicated to Giulia Farnese, Prince Orsini's wife. This temple probably was also her mausoleum, but nowadays there are no remains of her tomb. 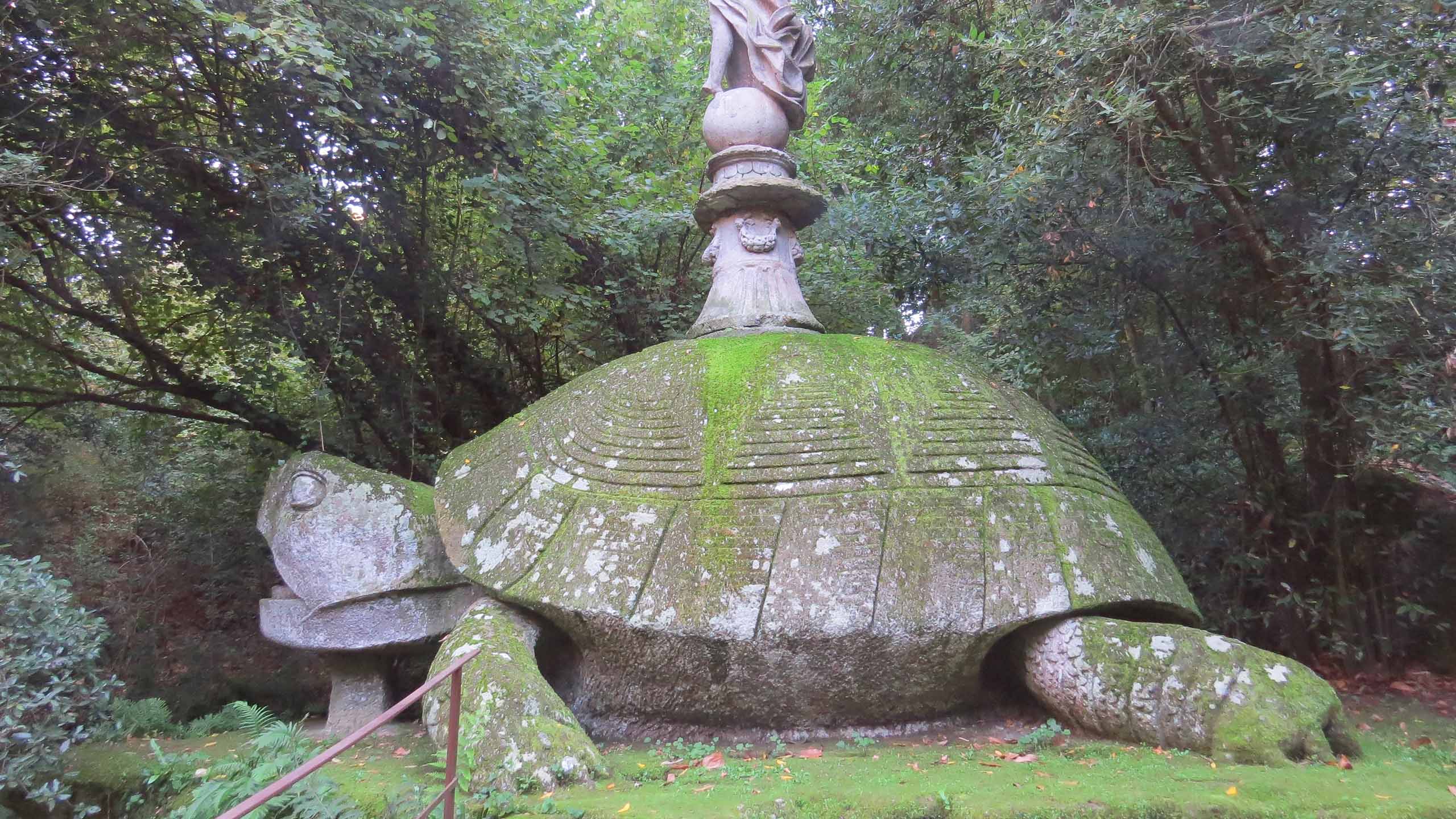 The legends of the park
Obviously, a so peculiar Park couldn't resist several legends of any kind. Many of them or connected to the prince Vicino Orsini, the one who ordered the build of the monsters would in Bomarzo. Probably the unusual shape of the Park was only a a game born by the imagination of an extremely mystic Prince, but the hypotheses are so many. And the most of them are about Vicino, who was a philosopher and an alchemist. The Prince was very familiar with the area of Bomarzo and he was particularly fascinated by the Etruscan age statues in the wood. In order to create a work with no time, to remember his greatness - as well as his father died - he decided to use part of the wood as his personal stage on the world. He was particularly fascinated by an esoteric text written by Francesco Colonna, named "Hypnerotomachia Polyphilii". The text told about a long dream the protagonist - Polifilo - did, hoping to resist the pain for the death of his loved wife, beginning a long walk to save her. Also Vicino wanted his personal course, and so he dedicated the cardan to his loved Giulia. The stone sculptures should be there love obstacles, or his political enemies. The statues contain the secrets of some political conspiracies. Others say the entire Park is an esoteric course. Walking along the course the Prince created in the wood, the novice should recreate the different faces of the alchemic Opus, to reach the esoteric truth. According to some experts, there are some inscriptions all over the park demonstrating this interpretation. 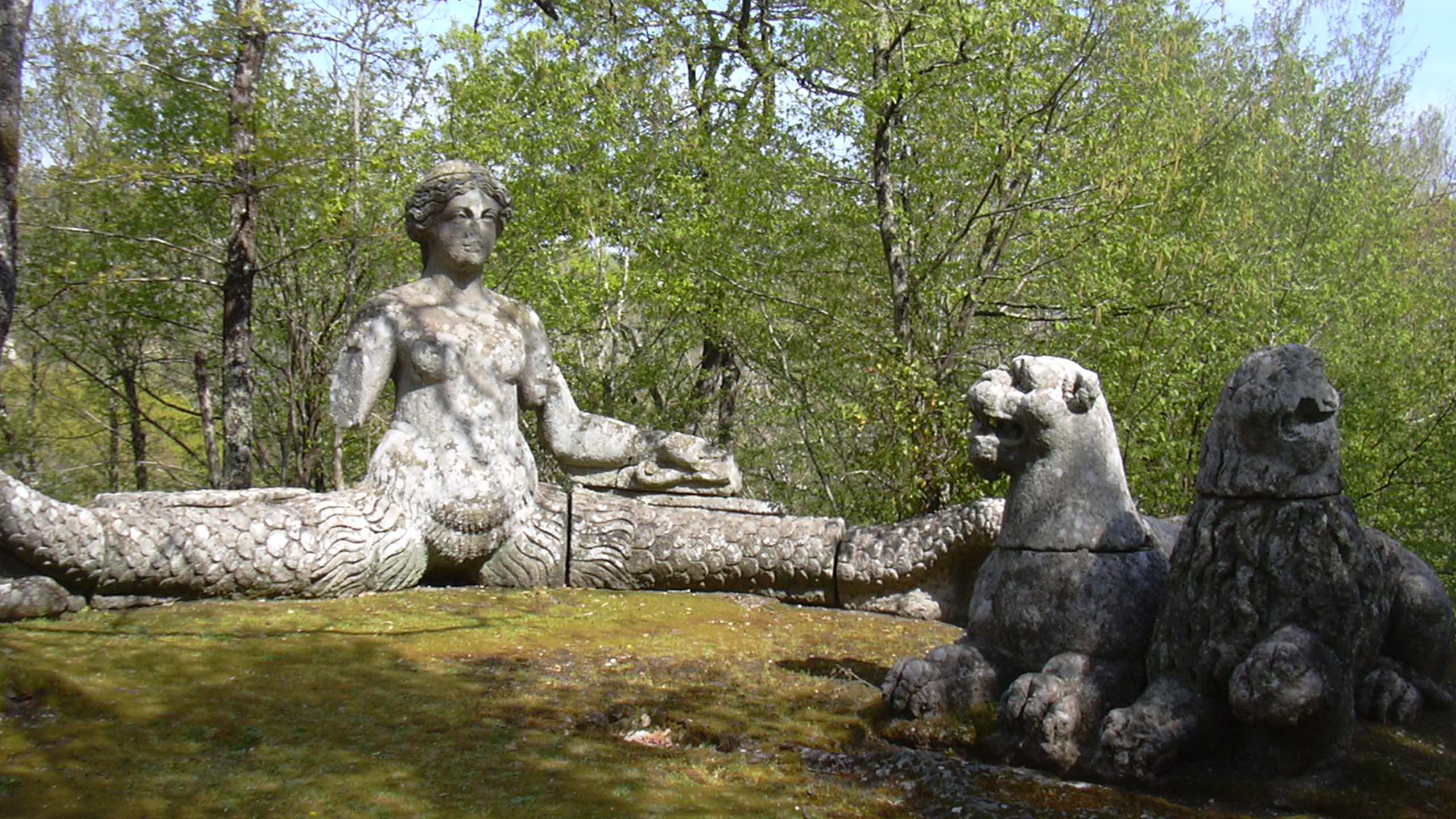 What to see around the park
After you have visited the park, there are several places you can see around it. Near the park there is the castle of the Orsini family. The Palace was the historical house of Vicino and his family; it is a mediaeval building still preserving the walls and the towers typical of the then castle, not only a house, but also a fortress against enemies.
In less than 30 minutes by car, you will reach Civita di Bagnoreggio, a typical mediaeval village you can reach only by walking along a long bridge by feet. This town is situated on a calcareous rock, subjected to erosion, bringing away with it the whole town. For this reason, Civita di Bagnoreggio is also known as the dying town. Nearby, There is also Torre Alfina, another village with its castle, where it seems time has stopped. Visiting this place means to jump in the past, surrounded by little artisan’s shops and houses still preserving the mediaeval dark fascination. For those who love history and journeys back in time, guests can visit the Etruscan necropolis of Borgo d'Asso. The necropolis is one of the best preserved ones, completely excavated in the tuff, as well as the majority of the buildings in the area. And if you love nature, we also suggest you a visit to the Sasseto wood, a beautiful natural voices mixing flora and fauna with statues and sculptures, all around the park.