The Pantheon: the Christian monument dedicated to pagan gods

The Pantheon, ancient masterpiece of architecture and engineering
The Pantheon - that means "temple of all the gods", in Greek - is an historical building showing its majesty in the heart of Rome. It is a monument built in the 2nd century, by Emperor Hadrian, known as a lover of art and culture. The Pantheon, whose origins date back to the Augustan age, was actually affected by some of the period before Hadrian's government.
This wonderful temple is dedicated to pagan gods, and its proportions are incredible: you can actually draw a circle around it as its diameter and height correspond each other, giving it a great balance and harmony. Probably the designer of the project was Apollodorus of Damascus, well-known Roman writer and architect. This example of the highest engineering making the building perfect gives origin also to interesting games of light, astonishing spectators; they exist thanks to the famous "oculus", a rounded window on the top of the dome, with a 9 metres diameter, from where you can see the sky.
The inscription written on the external walls of the Pantheon is very interesting too, situated over the pronaos: "M. Agrippa LF Cos. Tertium. Fecit" - without abbreviations it becomes "Marcus Agrippa Luci filius consultertium fecit", that means "Marcus Agrippa, Lucius' son of Lucius, consul for the first time built it". This suggests the element dates back to the first construction of the building itself - it means during the Augustan age, 1st century BC -, and that Emperor Hadrian decided to keep it on the building. There is also another writing on it, a dedication to Settimio Severus, that seems to be more recent, and shows the features of restoration; it says:

"Temple of all gods"
As we have already mentioned, the original aim of the Pantheon was to dedicate the temple to the pagan gods venerated during the Classic age, especially to the protectors of Augustus’ family. However, according to some scholars, the name of the building could be connected to the Vault of Heaven.
Whatever its function was, the "Temple of all gods" is an architectural masterpiece. You can enter by the pronaos, the rectangular area situated in front of the temple, surrounded by columns and covered by the tympanum, a typical Greek architecture element. The grey external columns - 13 m tall - are made of granite and welcome the visitors in a majestic way. The pronaos is surrounded by white steps, today covered. The entrance divides the building in three naves, but only the central one brings you inside: the side naves end in the recesses where probably there where two statues, dedicated to Augustus and Agrippa.
When you enter, in front of you, you can see an enormous rounded room covered by the famous dome with the hole. It is made of concrete, showing a peculiar engineering process. The materials it is made of get even lighter the more you go up, departing from travertine to end with the pumice on the top. Also the coffers on the ceiling decrease their dimensions. We can probably say that the long life of this monument is due to this very peculiar and accurate structure. A very interesting fun fact is that even if it's raining, the rain doesn't enter into the building: the ascensional flows smash the water drops avoiding its deposit on the floor. The final result is the impression it is not raining.
The pediment finally reveals a vanished decoration assumed to be made of bronze: it probably was a great eagle with open wings. 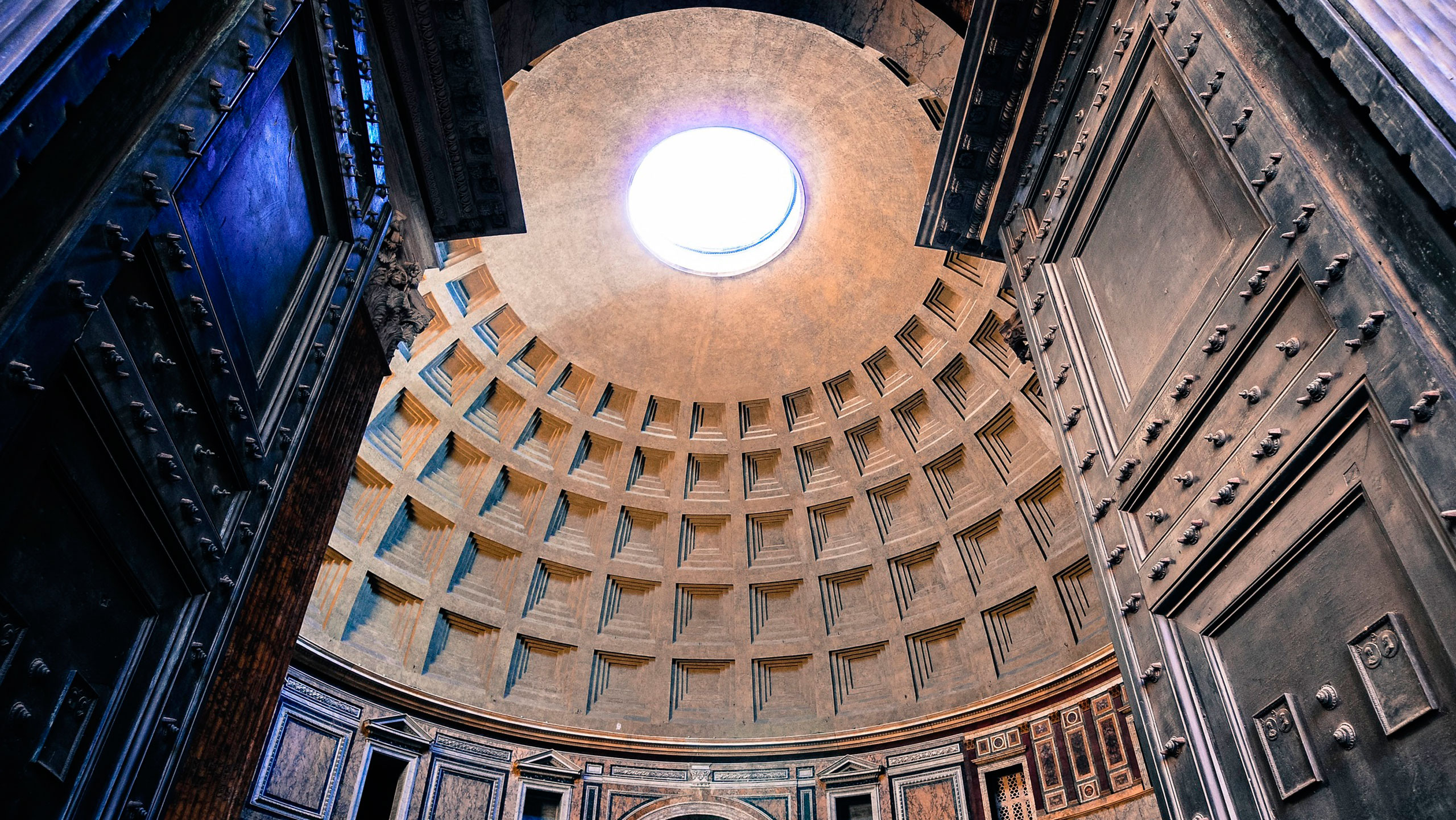 The interior
The Interior of the Pantheon is extremely impressive with its size and with artificial lighting blending with the natural sun, creating shadows. The floor is convex with an incline of about 30 cm, to eventually allow the rain flowing toward the perimeter of the building, equipped with appropriate drains.
The interior is distributed on three floors; the first from the bottom is full of exedras and pilasters scanned by columns, dominated by the continuous trabeation dividing it from the second floor. The wall coverings is made of coloured marble; the second floor was made of lesens to simulate windows, but what you can see nowadays is the new covering made in the 18th century. Some years ago, a part of the first floor was restored, even if in a way not so similar to the original one, in order to let you see the ancient book of the building. The last floor is dedicated to the dome with the hole.

The Pantheon: a Christian basilica
A legend tells during the spring equinox the moon gets situated on the oculus, at midnight. This phenomenon can be considered true, if we analyse the temple since its origins: it was built according to the ancient temples projects, usually dedicated to the great mother goddess. However, whatever the original purpose was, if this building is still in good conditions, the reason is its conversion into a Christian basilica, in the 7th century.
It was a very common habit for the pagan monuments; the Pantheon got changed once again in 1870, when it became the tomb of Vittorio Emanuele II, Margherita di Savoia, and the famous Renaissance artist Raffaello Sanzio.
Several legends talk about this building, but just one is connected to the Christian consecration, when 28 carts martyrs' bones were buried under the sanctuary. The legend tells after this act, seven devils escaped from the temple, and one of them made the hole under them to go out.