The ancient Tivoli and its magnificent houses

The ancient Tibur - today famous as Tivoli - was described as "superb" by Virgilio: it actually is about 30 kilometres from Rome, in a one of a kind context, at the bottom of Monti Tiburtini, in the heart of the Aniene Valley. It has always been refuge for famous travelers, artists and intellectuals, such as Svetonio, Orazio and Catullo, since the IV century B.C., attracted by the wonderful landscape and the pure air.

The imperial majesty of Villa Adriana
Emperor Adrian was one of the important characters who visited this place, choosing it as a location for his sumptuous house, far from the power of Rome.
On the first position of your to do list, there must be Villa Adriana, a city in the city, hosting theaters, buildings, gyms and big and small thermal baths - in the past, they used to collect from Acqua Claudia and Acqua Marcia aqueducts. Imagine anywhere stuccoes, mosaics and marbles where today there are only impressive ruins: there is a wonderful mosaic in Palazzo del Quirinale, and many stones of Villa d'Este come from this archaeological site. The symbol of Villa Adriana surely is the Teatro Marittimo: you will see a circular colonnade mirroring itself in a hole full of water, hosting a little island Emperor Adrian loved, in the middle; you can reach just swimming or bridges.

Visiting the Park, you will admire the genius of Adrian, telling about his journeys: for example, the channel of the Canopo, where there are statues and columns, represents a branch of the Egyptian Nile, and the Pecile is the Stoà Pecile of Athens, loved by Adrian. Don't miss the big Sala dei Filosofi, even if there is just the apse and some recesses once hosting the statues of the wisemen; some people think it was a library, and the recesses hosted volumina. By Pirro Ligorio, we know the room was very rich in marbles and prophiry.

The Renaissance elegance of Villa d'Este
Towards the heart of Tivoli, you are going to visit the spectacular Villa d'Este. It is a Renaissance jewel by Ippolito d'Este, son of the famous Lucrezia Borgia: he invented this sumptuous house to comfort himself for not having been elected Pope, committing Pirrò Ligorio to realize it. Certainly the frescoed palace characterised by the Manieristic style deserves a visit: for example, you should stop at the Sala di Ercole, with its painted roof shows his 12 efforts.

The Italian gardens will astonish you: you will find yourself immersed in a bucolic world made of caves and sculptures, nymphaeums and terraces, fountains playing unbelievable water games, as the were created in the 1500s. The peculiarity of the fountains is they use the Aniene's water, without any mechanic systems, used just to create special effects. For example, in front of the Fontana della Civetta, you will listen to bronze nightingales twitters suddenly interrupting their singing as the owl comes. The Fontana dell'Organo emits sweet melodies, by the pressure of water in the canes: the central aedicule, between the recesses hosting Diana and Apollo's statues, was made by Bernini. In front of the Fontana dell'Organo, there is a terrace, from where you can admire the Peschiere, three tubs in the green landscape of orange trees and hedges: in the past, the guests used to fish there, to taste the fish during rich feasts. 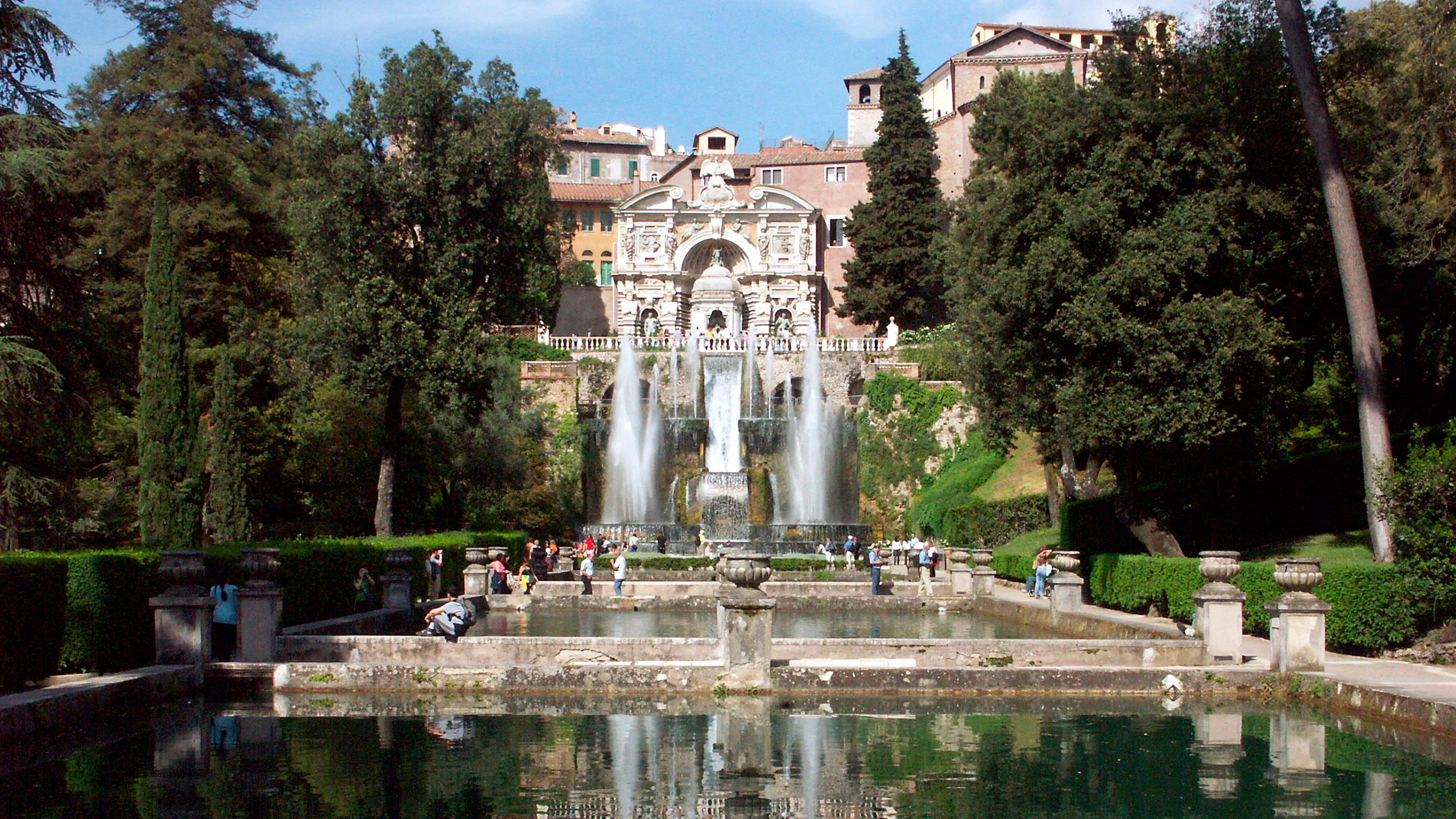 Go around the gardens to discover the Fontana del Bicchierone - by Bernini - the Baroque Fontana dell'Ovato, the Fontana della Rometta, on which you can see Romolo, Remo and the wolf, till the 1600s waterfall, by Bernini: the Fontana del Nettuno.
Don't go away without a walk - maybe at the sunset - along the Viale delle Cento Fontane, nowadays running along a green wall with fountains of animals, people and flowers.

The bucolic Villa Gregoriana and the view on the acropolis
From Villa d'Este, after the river, get in Villa Gregoriana: it is a natural oasis, of the FAI, created in the 1800s, by Pope Gregorio XVI. Wear comfortable shoes and visit all its upscents and descents, vegetation, paths, creeks and the Carsick caves of Venus and Neptune, the panoramic terraces such as the Vista del Papa, till the great 100 metres tall waterfall, created to balance the river Aniene's flow. Just around the waterfall, there are splendid corners, such as the little balcony in front of it, you can reach by the tortuous path "Ferro di Cavallo".

Villa Gregoriana is one of the best places for a spectacular view on Tivoli's acropolis: ancient and fascinating temples on a hill, to remember you the Athens acropolis, on a deep and green canyon. The first construction that will surely catch you attention will be the Temple of Vesta, a circular building from 80 B.C., where the vestals watched over the holy fire, to let it resist: you can still see some columns under the richly decorated entablature. On its side, there is a rectangular little temple - more ancient, probably dating back to the II century B.C. - dedicated to the Sybill: in the Middle Ages, it was move into the church of S. Giorgio, till 1000.