The charm of EUR, a congressual district, full of monumental works of art

The Eur is one of the most original and innovative districts in the city. Its history is inextricably linked to the Universal Exposition - that should have taken place in 1942 - and to the dream of creating a space as a symbol of the glorious perfection of the Roman Empire. Marcello Piacentini set the project according to the typical Roman Castrum plant, made over rigid squared viability system, and a pentagonal shape. He chose the area situated between Terme di Caracalla and the sea.

The Exhibition - ideal acknowledgement of the new central position of Rome in the European and international panorama - has never taken place because of the Second World War. However, that great artistic programme gave a very important heritage to the city of Rome, giving it a one-of-a-kind architecture district, rich in monumental art to it.
Completed in the 60s, the Eur nowadays is a modern, congressual, and residential district, and an extraordinary creativity and experimenting laboratory, well connected to the city centre, and worth of a deepened visit. The architecture is something you can't miss, because of it geometrical shapes, and its atmospheres typical of De Chirico's style: they have fascinated experts and fans, but also famous directors, such as Elio Petri and Michelangelo Antonioni, so becoming the set of famous movies. Tertiary and administrative centre, it hosts the buildings of some Ministries, it is the favourite location of several public and private companies' offices in Rome, and it has also become the centre of the night life, thanks to its trendy restaurants and clubs. It is experiencing an important rebirth, and it seems to be projected to the future, thanks to the rich investments it is attracting once again.

What to see in the Eur district: architecture, monuments and museums
The Eur will astonish you by a wide range of monuments and museums you can visit. You can't miss the visit of the Museo della Civiltà Romana, situated in one of the most suggestive buildings of the district, hosting the Planetarium that can be recognized by a travertine columns courtyard, in a mix of static and dynamic lines. Made of 59 sections, it tell us about the ancient Roman civilization, and it is famous for the great reproduction of Rome at the time of Constantine, together with them Train columns molds, ordered by Napoleon III.
The Palazzo della Scienza is the work of several and important architects, and it is famous for its peculiar plant; it hosts an interesting permanent exhibition of pictures about the district, actually symbol of architectural and urban modernity. Inside of it, there is the Museo dell'Alto Medioevo, made of 8 rooms, exhibiting artefacts made from the 4th to the 10th century, from the central area of Italy: a must to understand the deep changes after the fall of the Roman Empire. 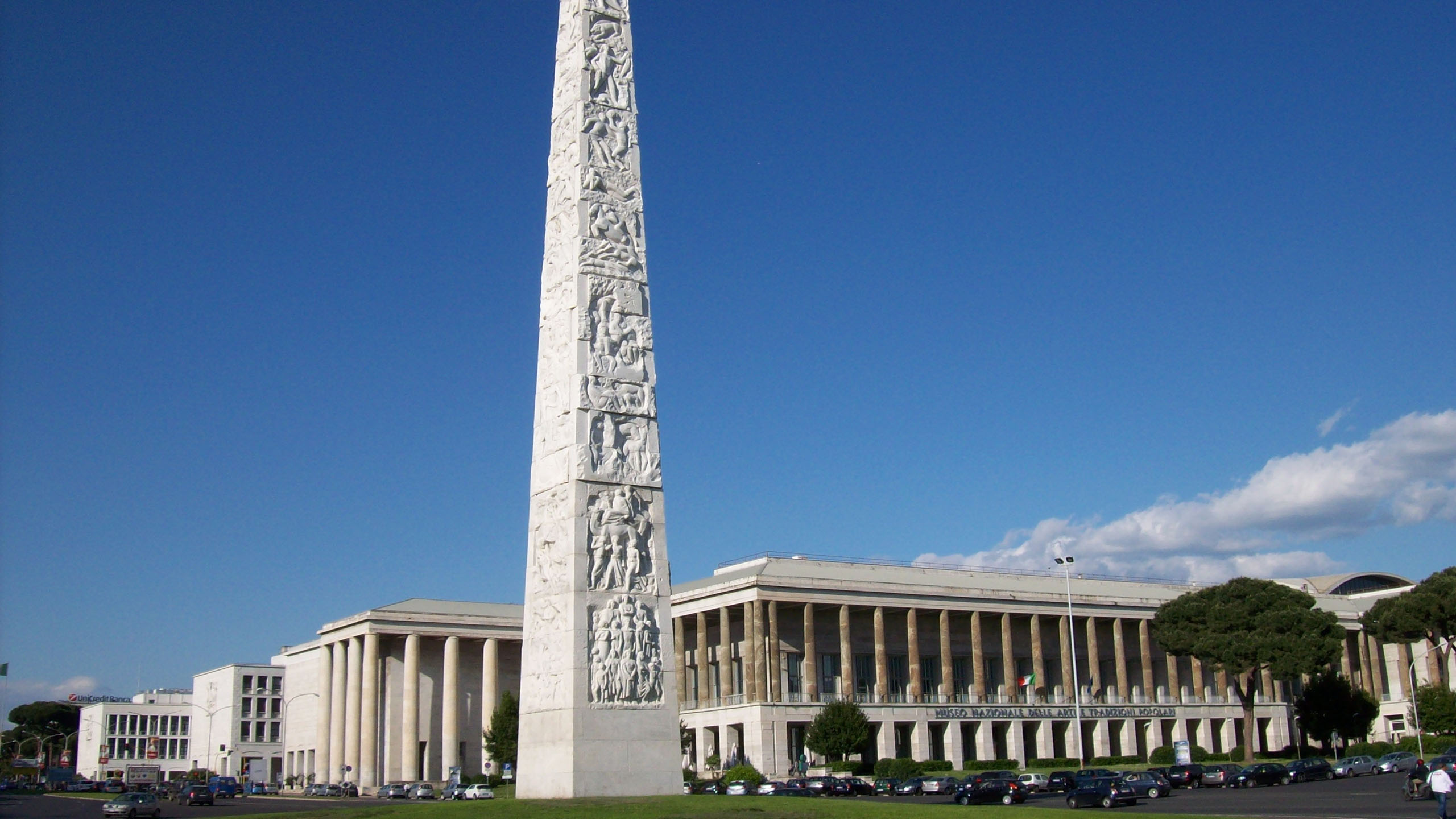 The Palazzo della Civiltà Italiana is the perfect place for architecture lovers: it is also known as the Colosseo Quadrato - the squared Colosseum -, and it is one of the strangest symbols of the district, often protagonist of positive and negative critics. It inspires contrasting sensations, despite of its perfect shape. The symmetrical artists and the travertine marble make it a symbol of the Roman architecture from the 20th century; you can see 28 statues under each arch, representing jobs and skills. They enhance the Italics virtues, as the famous inscription on the building says: "A nation of poets of heroes of saint thinkers of scientists of navigators".
The "Palazzo dell'Arte Moderna" is one of the buildings designed for the central nucleus of the exhibition, the Imperial Square that should have represented the Great "agorà", characterized by a typical classic style. The large internal courtyard, and the "elegantly refined marble columns, on the floor decorated by polychrome marbles" make it one of the most interesting districts, appreciated and analysed by several international experts. 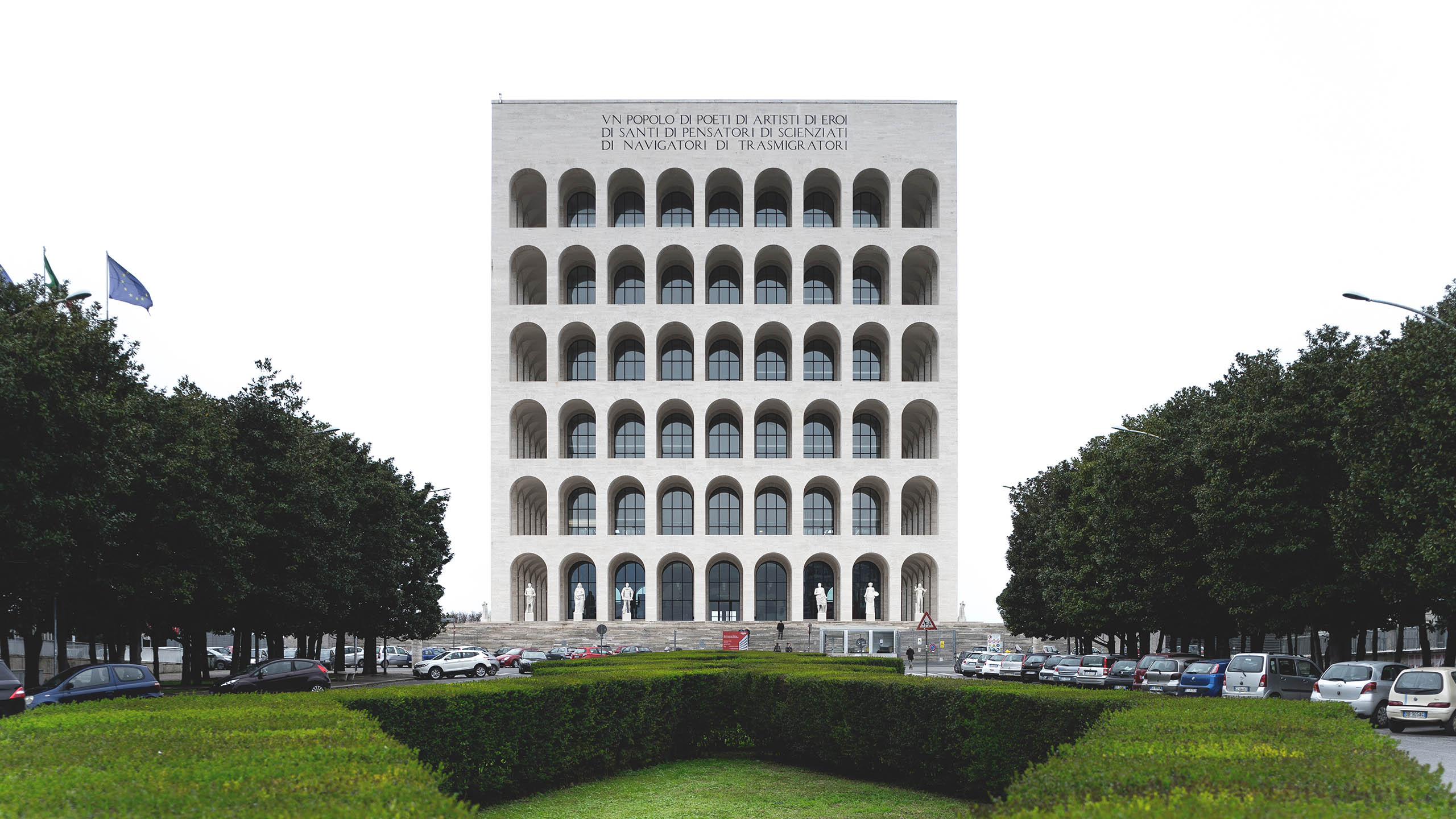 As you can state, it doesn't miss any historical or artistic attraction; however it is considered a congressual district, because of the several events taking place there. The symbol of this character surely is the "Palazzo dei Congressi", designed by Adalberto Libera, whose built started in 1939. The Second World War temporary stopped the project: but works restarted after the end of the world, even if they got finished only in 1954. It surely is an ambitious work, whose meaning has to be found into the general urban plan of the district. In front of another very important masterpiece of the rationalist architecture - the Palazzo della Civiltà Italiana -, its structure is made of reinforced concrete, hidden behind the travertine cover, giving it the appearance the Fascist style demanded.

Not only architecture: parks, recreation, and entertainment in the Eur district.
We suggest you to stop at the Parco Centrale del Lago, to have a break in a big green area in the centre of a pretty artificial lake. It really is an oasis where you can play sport - kayaking for example -, relax yourself on a well-kept grass, and have long walks around the lake; in the spring, it gets magic, as the cherry trees offer you a wonderful show of flowers, and the warm temperatures allow you to take advantage of the sun. The Giardino delle Cascate – planned to be a majestic monumental entrance to the district - will offer you a triumph of water games.
The old Luneur - the historical amusement park of Rome, one of the most ancient and biggest in Italy - has recently opened to the public again, after a period of absence. The rebirth of the park was entrusted to a company of "Cinecittà Entertainment": they found a solution to give its splendor back again.
The Terrazze, situated on the Palazzo dei Congressi, an important example of rationalist architecture, but they also offer you a suggestive and romantic view of the district, offering you unmissable emotions under the stars of the Roman sky.
Several representatives of the catering sector have chosen this district to make innovation and excellence their symbols. Clubs where you can find several wines, season food, fusion restaurant, and Roman original recipes, in suggestive areas, make this district the ideal place where to discover some of the trendiest Roman food proposals.