Trajan's Market: its history
Trajan's Market takes its name from the great Roman emperor who built it. It is the first big covered market ever built, near the Foro di Trajano, the greatest imperial forum. In the ancient times, the two structures actually were just one big complex, connected to the forum. The market was designed and created by the supervision of architect Apollodoro di Damasco, in 113 BC, even if the last archaeological investigations have demonstrated the built of the complex had started during Domiziano's reign. Restored in the third century after the damages caused by a fire, thanks to the Horatius Rogatus - as an inscription shows - it found its original beauty again.
It was actually used as a castle, a barrack, and a convent, by the years. The noble Roman families made it a “castellum miliciae”, improving its defense structure, by Pope Bonifacio VIII - in 1300 - and emperor Arrigo VII, in 1312. Later on, it was used as a barn, and the market got damaged, as in the 16th century the central facade was completely destroyed, as well as the other areas.
The great internal hemicycle made of little shops was condemned. Another distortion of the Roman architecture is connected to the assignation of the market to Santa Caterina da Siena convent, when several interventions took place to make it available since the beginning of the 1574. At the beginning of the nineteenth century, under the Napoleonic domination, the first archaeological diggings of the area took place, even if it became a barrack, in 1885. During the 20s, the restoration works started, giving the building its original appearance. 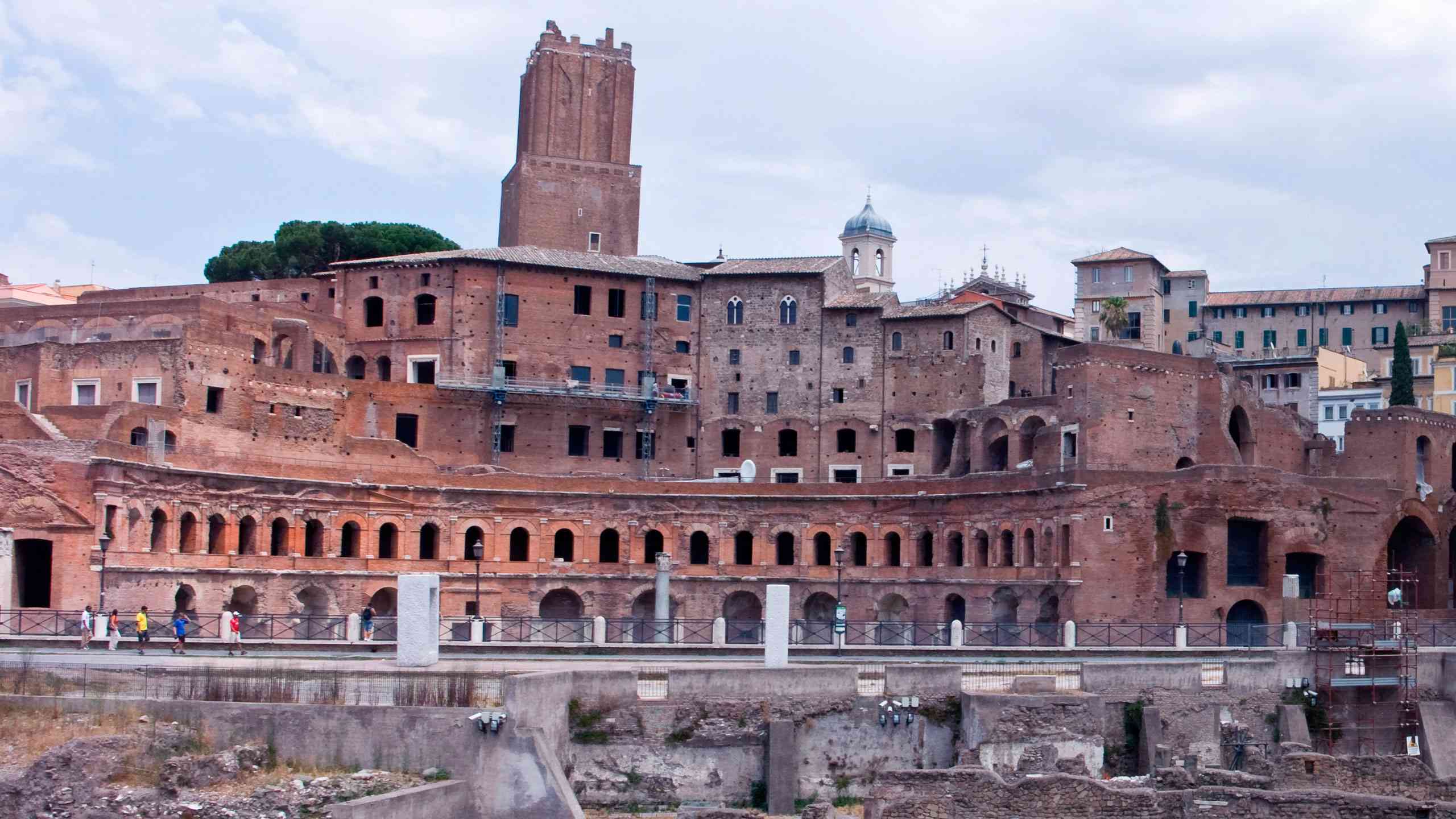 The structure
The several buildings part of the market have very different looks: the lower part used to host commercial activities, reason why it was considered a branch of the forum. On the upper floors, there were administrative and management activities. The style is very similar to the one developed in Petra - Jordan -, during the first century AD.
We don't have to forget Apollodoro da Damasco was Nabatean. As a consequence, the complex is a sort of exception in the architectural Roman panorama, as it is characterized by several different styles, mixed together in a homogeneous structure anyway. The big facade of the market is situated behind the forum portico. The entrance is in Via IV Novembre and it opens to the big central rectangular area on two floors.
It is an environment with no competitors in the Roman architecture, and it is made of 6 crossings, supported by big shelves made of travertine. It is said it was a negotiating point, a sort of ancient stock exchange. All around it, there are the "tabernae", the old shops, that used to send several different types of products. Within these places, there were some architectural elements and statutes also used in the Caesar, Augustus, and Trian's forums. A lately built stairs - probably dating back to the 16th century - allows you to reach the second floor, from where you can see a wonderful view of the Fori Romani, and the Campidoglio. From the “tabernae”, you can get to the garden and to Nero tower.
Near the back wall of the area, there is another big stairs leading you to Via Biberatica, a street taking its name because there were several wine shops during the Roman age. It is perfectly preserved, and it is surrounded by some Roman and mediaeval completely destroyed “tabernae”. There is also a passage from Trajan's market to the farm with the same name, passing under Via Alessandrina.

The Trajan's Market today
The entire monumental area was discovered by the archaeological diggings of the period between 1926 and 1934, according to the recovery project by senator Corrado Ricci. Almost all the changes applied by the time have been cut away, however after the Second World War the Trajan's Market got abandoned.
Only at the half of the 80s, some restoration interventions took place. Today, the structure is the permanent seat of the Museo dei Fori Imperiali: the aim is to keep the usability as intact as possible, and have a museum dedicated to the architecture of the Forums, their decoration and their ornamental sculptures.
Some parts of the architectural complexes have been built again; nowadays, some multimedia instruments are used to enrich the tours. The building is divided in five sections, corresponding to the Peace temple, the Augustus' forum, the Caesar's forum, the Trian's and the Nerva's forum.
This organization allows the discovery of the evolution the decorations and the styles had from the first century BC to the first century AD, in Rome. Trajan's Market is often also the stage of several exhibitions and cultural events nowadays.