The legend of the Basilica di Santa Maria Maggiore

The Basilica di Santa Maria Maggiore is one of the wonderful holy buildings in the Eternal City, one of the greatest symbols of Rome of the Pope, and of the Catholic Church. And if we stop just here, the Basilica wouldn't probably be so important, but just a drop of water in an enormous sea of history and beauty as the Urbis is. Santa Maria Maggiore has a long history, a long tradition and a legend behind its time, too.

Historical information
Pope Sisto III (Pope from 432 to 440 AD) made it build to dedicate it to the Holy Mary, after the deliberation of the Concilium of Ephesus, in 431 AD; the Basilica was built on a previous building, a Roman house from the Imperial Age, according to the remains found.
Regardless its origin, the Pope ordered the building of 42 panels about the Bible stories, still present in the central navy, together with the Triumph Arch, representing the most important stories about the art of the empire. Niccolò IV enlarged it, ordering the reconstruction of the apsis, the decoration by mosaics and the building of New facade, decorated by Filippo Risuti mosaics. After the 15th century and the realization of the panelled ceiling, by Giuliano Di Sangallo - it was made of gold from America and from the famous "reyes catolicos" Ferdinando D'Aragona and Isabella di Castiglia.
The current facade of the Basilica is from 1743, ordered by Benedetto XIV to Ferdinando Fuga. Even if these decorations covered the previous mosaics, they have unconsciously preserved them by the age and the damages of the time. The last reconstruction we know about is the creation of a holy door on the right, decorated by bronze reliefs about the Incarnation stories, from 1937. It is important to know that the Basilica di Santa Maria Maggiore has other two names "Sancta Maria ad Praesepe" ( as there are some remains of the Bethlehem cave, such as Jesus manger), and "Sancta Maria ad Nives" or "Santa Maria della Neve". The latter is a very funny name so that historians don't trust its origins. 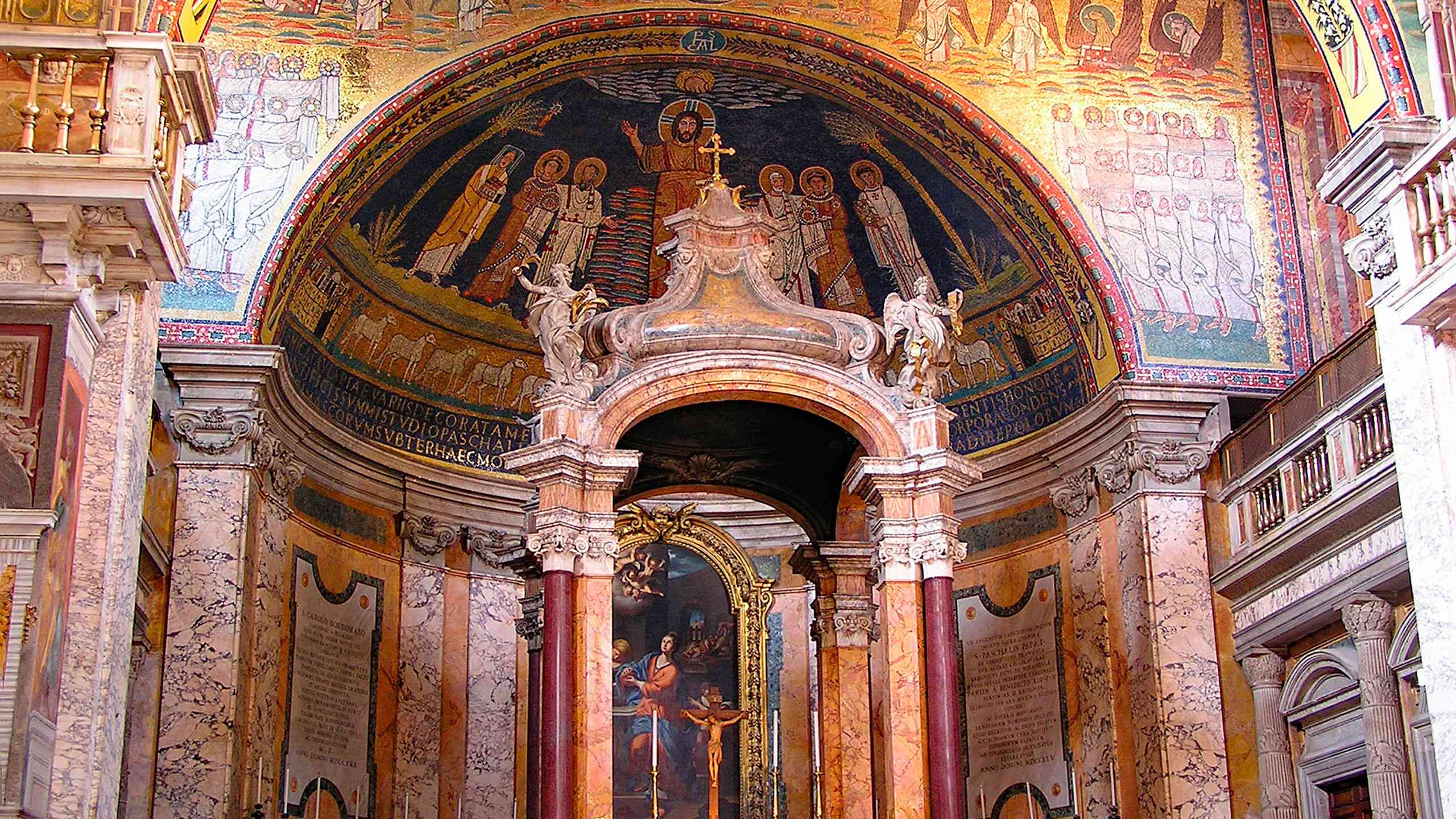 4th August 352 AD, Rome.
It's night but somebody is not sleeping in the Eternal City. It is Pope Liberio, because he is dreaming about the mother of the Saviour. She has a very particular message for him, a premonition: on the following day, a very unusual event would have taken place and the Pope had to order the built of a church dedicated to her.

4th August 352 AD, Rome
It's still night in the Eternal City, and there's somebody else is not sleeping: now the subject we are talking about is completely different. It is an old and rich Roman patrician couple, Giovanni and his wife. A woman wearing a blue dress tells them about a mysterious event and she orders them to build a church dedicated to her.
If those people were simple Roman patricians of the previous centuries, the vision of the Holy Mary would have been useless, because they would have been pagans. But we are not talking about the ages of Augusto, Nerone and Commodo. A lot of people were converting them-selves to the Catholic religion. Giovanni and his wife were these type of people. They decided to donate their richness to create a temple dedicated to the Holy Mary and the only one problem was the choice of the place where to build it, and how to do it.

5th August 352 AD, Rome, Esquilino Hill.
It's a sunny morning, it seems it's summer and people feel very hot. Summer is hot obviously, it is not so strange, but what is strange is it is snowing on August. As they hear about those news, Pope Liberio and the couple go to the Esquilino Hill, thinking about the vision they had during the previous night. They feel very excited thinking about the woman they dreamt about, and they get touched observing the miracle around them, and thinking about the ways God finds to act. They realise the snow is the best symbol of purity God could choose. So they immediately decide to build the basilica and they start to draw the perimeter of the walls on the snow. This is the story of the Basilica di Santa Maria Maggiore, according to the legend of course.

Snow on August; myth, art and reality
Obviously it is just a legend, even if without imagination we probably wouldn't have so precious works of art, such as the apsis describing Pope Liberio designing the Basilica and the masterpiece by Masolino Da Panicale.