The story of the Fontanone dell'Acqua Paola at the Gianicolo

Rome will make you get lost around the wonderful panoramas you can see by its narrow lanes and great squares, its famous and unknown monuments, avenues and secret streets.
Walking along the fascinating narrow lanes in the city centre you will get astonished, but don't miss the occasion of watching the best view of your life from one of the seven Roman Hills: the Gianicolo.
The majority of people usually stop in front of Garibaldi's monument, a few minutes before 12pm, to listen to the cannon shot: it is visible from the Aventino hill, in the Giardino degli Aranci, and you will recognize it by its sound and its white smoke.
If you go on, towards the top of the hill, you will see a wonderful fountain near Porta San Pancrazio. An enormous one, nowadays called the Fontanone dell'Acqua Paola or Fontanone del Gianicolo. 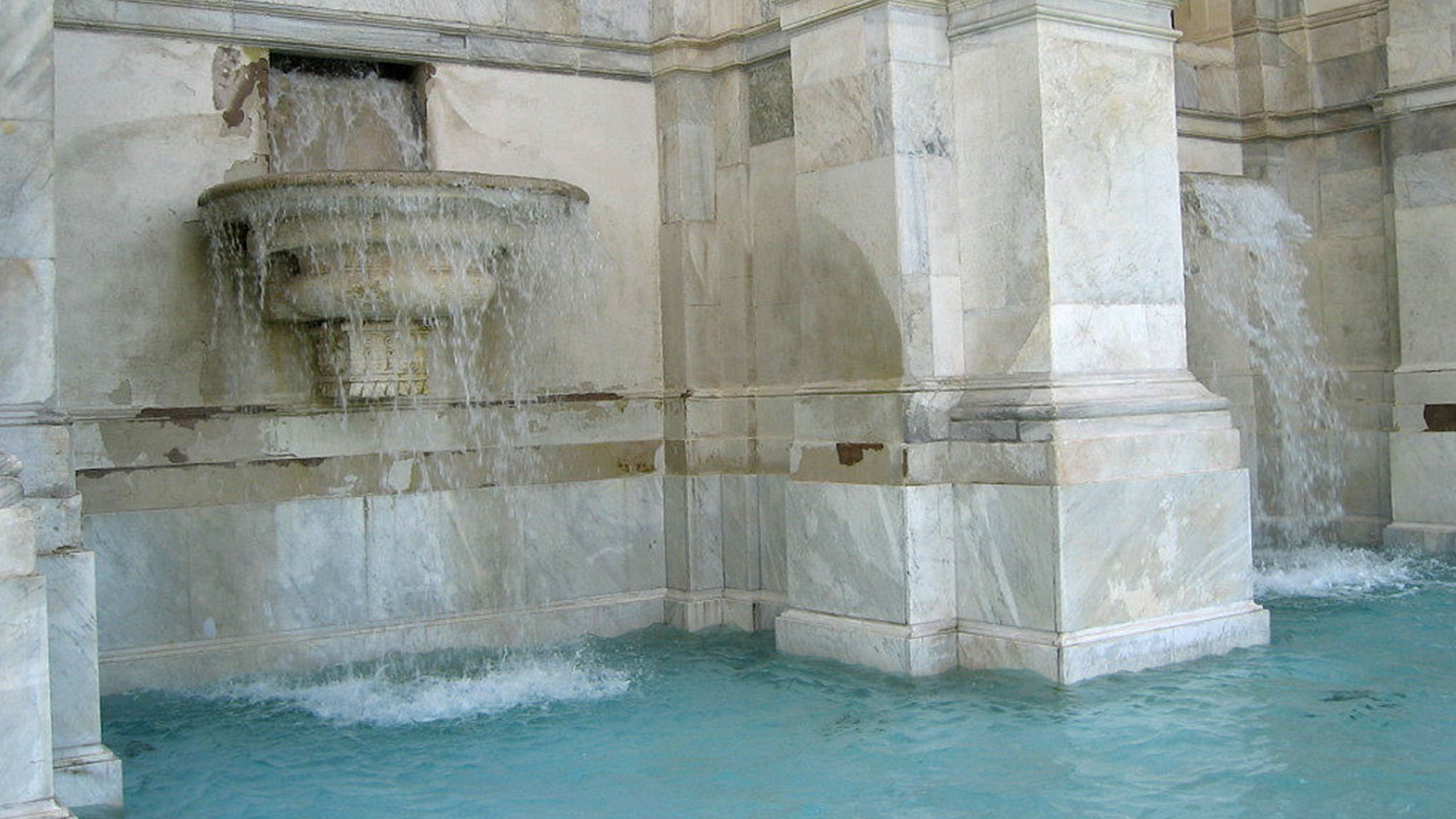 The construction
The plan was commissioned by Pope Paolo V to Giovanni Fontana; the works started in 1611, and finished in the following year. The Roman administration took part to Traiano aqueduct restoration, even if the idea of the Pope was just to always have a water reserve in his residence, not really to make a public fountain.
Restoring the Roman aqueduct, the Pope would have had completed his project, as his predecessors wanted, too. Fontana designed a project helped by Flaminio Ponzio: it was similar to the Acqua Felice fountain made in 1587 by the previous Pope. It was a smaller project, but with the same esthetical principles.

The structure of Acqua Paola fountain
The fountain is made of five arches: the three central arches are taller than the side ones, and there are some windows inside of them instead of statues, facing on a garden, and then situated back the fountain itself.
On the top, there is an inscription with the Pope coat of arms: the two angels are by Ippolito Buzio. The inscription brings and historical mistake with it, because they talk about the Alsietino aqueduct, not Traiano's: he had already annexed it when the fountain works started.
We should remind Roman people were experts in building aqueducts. At the time, the trend of creating water games was getting common, in Rome. Some examples of this trend are the battles taking place in Piazza Navona, when they used to fill in the square with water just to entertain people.
The majority of Roman aqueducts where from the left bank of the Tiber, just one of them departed from the right one, actually the one Traiano ordered to build in 109 A.D. Bringing water to the citizens was a very important problem during the Imperial age: there were so many citizens so that they have to build this aqueduct to supply the area; it corresponds to the current Trastevere District. 57. The right part of the Tiber was one of the parts has been refilled later in time; it's very strange, but one of the most central and typical Roman District, was considered outskirts at the time.
We can say the idea to create the exhibition of Acqua Paola the Pope had given new strength to the aqueduct, to not forget it.

The origins
The plan was originally made of five tubs, corresponding to the arches, coming out from big mouths, but the project changeed when Carlo Fontana was charged to realise what we can nowadays see. He enlarged the big central window, by a big basin coming out from a rectangular tub, pouring water in other smaller basins.
The materials they used to build it where marbles from the remains found in the Foro di Nerva, Foro Romano, and Minerva's temple. The red and gray granite columns were completely taken away from St Peter's Basilica.
The peculiarity of this fountain is the presence of papal coat of arms on the 6th little columns in the swimming pool, where you can see the animals, symbol of the Pope. The animals of the heraldic coat of arms are everywhere in the building period They lately added the terracing in front of it, because it was completely overhang.

The Fontanone in the history
During his journey in Italy, in 1787, Goethe passed in front of the fountain and left a passionate description of the place, telling about it as Paola waterfall, falling from the five arches locked in the Triumph arch, highlighting the restyling the Pope did, when they connected Bracciano lake.
The Fountain was victim of hard bottles in defense of Rome, in 1849: it was affected by the cannons shots, so it had to be restored again, in 1859. If we could talk more about it, we could tell you about some famous young people achievements, such as Mameli: they sacrificed themselves for freedom, fighting against French people, so stronger than them. A more recent restyling took place between 2002 and 2004.
As it offers an immense panorama, we suggest you to go up - even if it is a little bit hard walk - to observe it, and then to visit the mausoleum storing the fallen that fought to defend the Roman Republic - better if you go there during some festivities celebrating them, when people wear the typical clothes of the time. The busts of those strong freedom guards decorate all the way up the Gianicolo, where you can take a breath having a break in front of Giuseppe Garibaldi and Anita's statues, and the seat in front of them.
The evocative effect Acqua Paola fountain makes influencing the songs too: Venditti sang it in his song "Roma Capoccia", from 1972.
And even the cinema didn't resist in front of it, taking it as protagonist in several films, first of all in "In nome del popolo sovrano", from 1990.