The surroundings of Rome: the Sanctuary of Fortuna Primigenia in Palestrina, destination of believers from all over the Roman world

The surroundings of Rome deserve to be visited paying the same attention paid during a tour of the capital. If the Eternal City and its historical centre are rich in places of great historical and architectural interest, near there, extraordinarily suggestive sites can't be missed, too.
Among them, an example is the Sanctuary of Fortuna Primigenia in Palestrina, a town located about 45 kilometres from Rome, very close to the Castelli Romani area. The Sanctuary was dedicated to the goddess Fortuna, ancient protector of the Roman colony, today renamed Palestrina, by the inhabitants of Praeneste. The site and the nearby museum - both property of the Ministry of Cultural Heritage - have been managed by the Museums of the Lazio Region, since December 2014. A tour of the area is strongly recommended, especially for those who love history and archaeology, both passions of most of the people who decide to visit the Capital.

The true history of the Sanctuary
The Sanctuary of Fortuna Primigenia was built around 110 B.C., although the dating of the complex - generally considered to be of the Silla’s age - has been repeatedly questioned. Many scholars actually declared it was built in the middle of the second century B.C., despite of some epigraphic evidence. In any case, the numerous archaeological finds in the area demonstrate the existence of a cult dedicated to the goddess Fortuna, since the fourth century B.C. The need of a place of worship dedicated to the divinity actually brought to its built. However, some people supposed the complex was built thanks to the income of the local aristocratic class, enriched by the traffic the Eastern trade. In a few years, the sanctuary became famous throughout the Italian peninsula and the entire Roman world, thanks to its uniqueness and its considerable size.
According to the pagan tradition, Fortuna Primigenia was the first born among the sons of Jupiter; at the same time, she is also called "Primordial" so considered both mother and daughter of Jupiter. The cult of the goddess Fortuna was soon associated to oracular instructions, which took place by the extraction of the so-called "fate". All the believers who arrived there used to ask for divine answers to their requests. The extractor of the "sortes" - whose responses were engraved on wooden or ceramic tablets - were children who symbolized the Iupiter Puer - Jupiter Child - another deity worshiped by the inhabitants of Praeneste. Later, the Roman people attributed the title of Arcanus to the Iupiter Puer, that means guardian of the ark. It was a container made of olive wood, the tree the Roman people considered miraculous. The olive tree rose where the sanctuary was built and the ark was made using just the wood of the holy tree. Inside this container, the sorts were arranged, bringing the oracular responses written on them.

The ancient building
The remains of the sanctuary were brought to light only in 1944, when an ancient building - articulated on various artificial terraces on the slopes of the Ginestro mountain and connected between them by some stairs - was discovered. The built of the sanctuary was undoubtedly inspired by the large Hellenistic terraced buildings, such as the sanctuary of Atena Lindia in Rhodes, with a very high stylistic and technical level. The work is attributed to a very talented late-Hellenistic architect, trained by one of the most important engineers of the Hellenistic "Baroque", and among the founders of the generation of architects active in Rome between the end of the II and the beginning of the I century B.C. The two lower terraces were accessible by a stair from the town square.
They were then delimited by two large polygonal walls. On the second terrace, five semi-circular pools surrounded by columns and next to service areas were found. From the third terrace, it was possible to access two monumental stairs with a portico adorned by Doric capitals, statues and valuable paintings in the first Pompeian style. On the fourth terrace, instead, there was the holy well, guardian of the fate of the goddess Fortuna. There was also a statue of the goddess breastfeeding Jupiter and Juno children. On the last terrace, the highest, there was a large square in the shape of a "U", bordered by a long portico supported by a row of Corinthian columns. This square housed a theatrical cavea crowned by a circular temple in the middle, but today only the foundations are still visible. Inside of it, there was the statue of the goddess Fortuna, made of many different materials: the author used white marble to make the naked parts and the grey marble for the dress and the details. 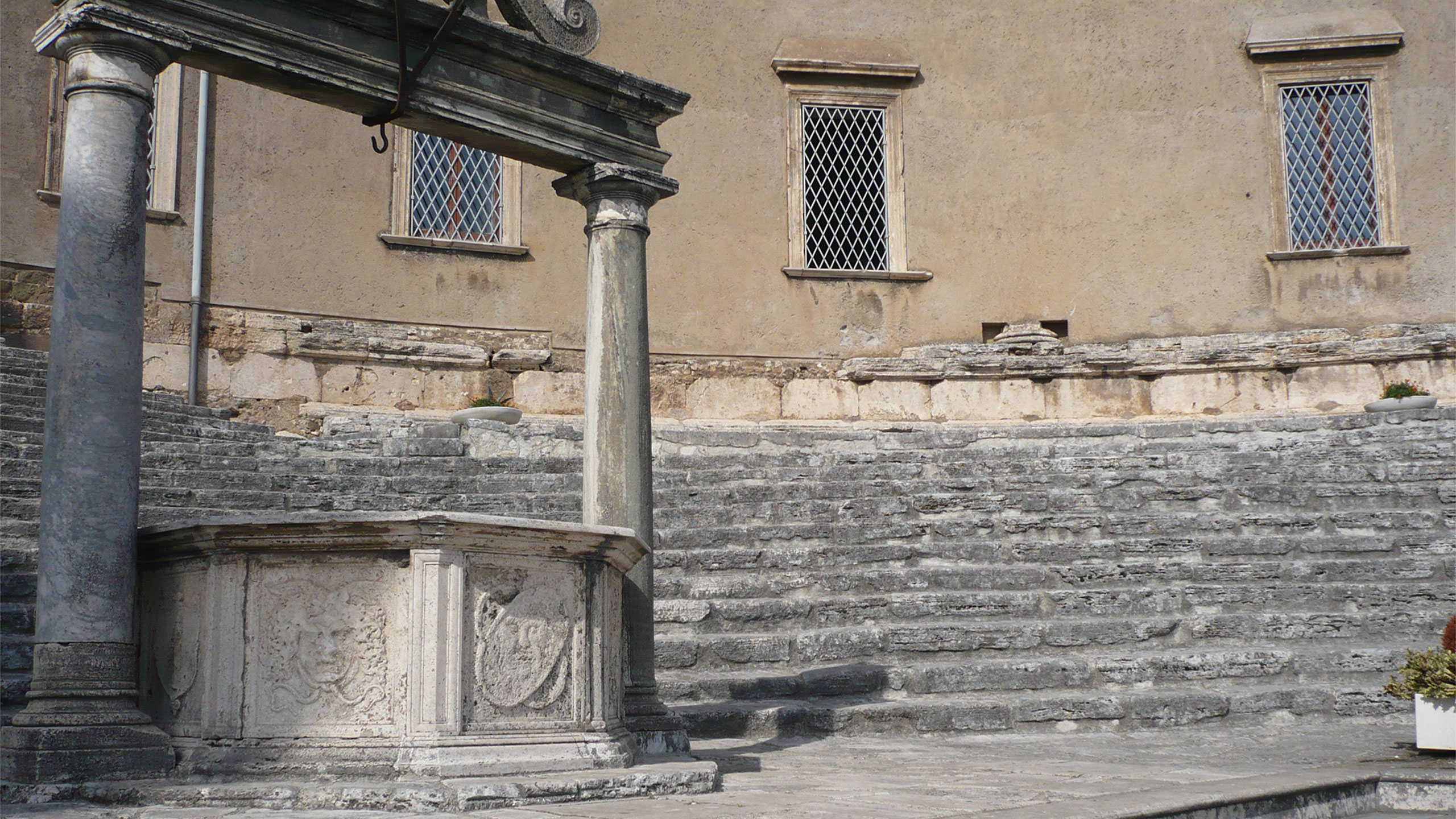 The Palazzo Colonna Barberini
Arriving on the sixth terrace of the ancient sanctuary, you can see the theatrical cavea. Looking towards the bottom of the square, it is possible to discover the main façade of Palazzo Colonna Barberini, commissioned by the Colonna family, in the 12th century. It was built above the portico on the back of the terrace. However, what we can admire today is the building rebuilt by Taddeo Barberini, during the 17th century. Today, the palace is owned by the State and it houses the rooms of the Prenestino Archaeological Museum. It owes its name to the lords who held it for many centuries, so the Colonna family, who commissioned the built of the original nucleus, but also to the Barberini family, who bought it in the 17th century and started its reconstruction, owning it until the end of second World War. The palace was then restored again during the twentieth century, before making it one of the most important museums in Lazio, visited by thousands of tourists every year. Inside of it, there are many 16th and 17th century frescoes.