The Basilica di San Paolo fuori le mura is situated in Rome, and it is one of the four papal basilicas. After St. Peter’s, it surely is the biggest one, and it deserves a visit for its solemnity, but also for the richness of its treasures. So, let’s discover one of the Christianity wonders.

The story of the Basilica of San Paolo out of the walls
It is situated in an area was a cemetery in the past. This cemetery was particularly used during the 3rd century AD, but less in the rest of the time. The name "outside the walls" was used because the cemetery was usually built out of the city. In 64 AD, also Paolo di Tarso was martyred and buried there, so two little altars were built to commemorate him. In the first century, Emperor Constantine I decided to create a small basilica to allow all the believers to visit the tomb and pray. But St. Paul had so many followers it was too small. For this reason, in 391 AD, the three emperors Graziano, Teodosio, and Valentiniano decided to build it again, and it resisted until 1823, when a fire affected it. Over the centuries, however, until the night of July 15th in 1823, all the Popes of the time changed it, to make it even more majestic. That fire destroyed almost the whole building. Two years later, Pope Leone XII released an encyclical to collect funds to build the basilica again. The works began in 1826, directed by architect Belli and lately by architect Poletti. The Basilica di San Paolo fuori le mura finally got the appearance you can see nowadays, except for the external court, added in 1928. In 1891, after the explosion of a magazine, the multi-colored glasses got destroyed, lately substituted by thin alabaster glasses, given by the king of Egypt. Recently, in 2006, the basilica underwent internal renovations to recover the papal altar. 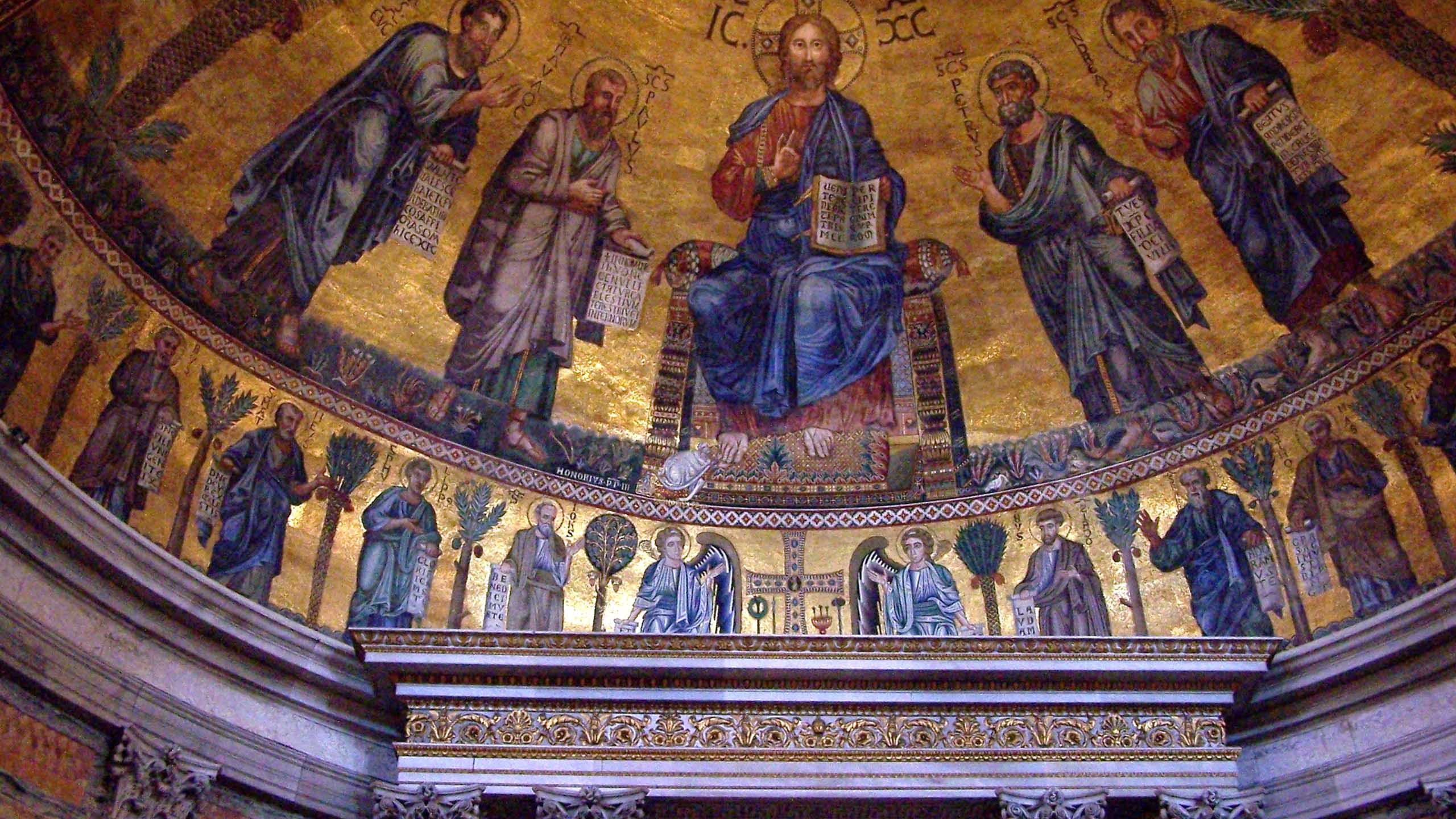 The magnificence of the internal and external parts of the Basilica di San Paolo fuori le mura
It has always been admired by all its visitors. That's the reason why probably after the fire in 1823, several people donated money to give the Basilica its ancient splendor again, as soon as possible. Today, outside of it, you can see a plaque by Stendhal: "strict beauty, and the footprint of misfortune". As it is situated where St. Paul was tortured, his statue welcomes the visitors as well as they open the door. The statue - enormous and made of white marble - is situated in the middle of the court before the entrance. The basilica has a Latin cross plant, with three naves - one of them ends by an arch decorated by a wonderful coloured mosaic. The so-called Galla Placida arch takes its name from its customer. In the middle of the mosaic there is Christ the Almighty. The ceiling of the basilica is completely covered by golden chests over polychrome marble floors. On the walls of the arches, instead, there are commemorative decorations, each one by different artists, but the one by Vincenzo Morani is the best one, describing St Paul's life. The transept has the same structure of the central nave. There are also two altars, dedicated to the holy Mary and St. Paul. Over the transept, there are four chapels: St. Stephan's, the Blessed Sacrament's, and St. Benedict's. All of them are decorated by important artists' works, such as Tino da Camaino and Vasari. There is something you can't absolutely miss: it is the organ Pope Leone XIII gave to the Basilica, in 1885. Over the centuries, it was modified by different masters of the time. 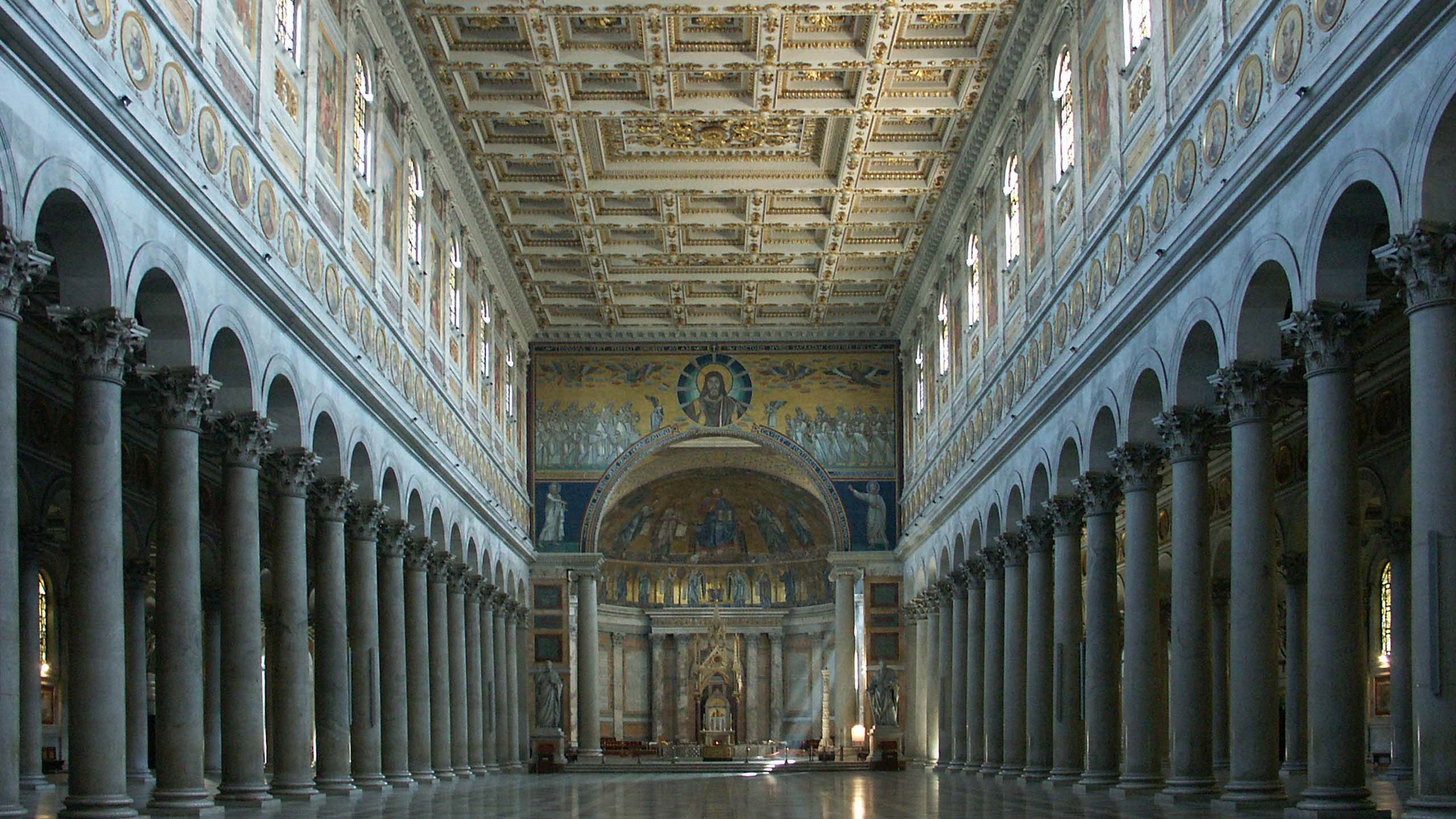 The treasures hidden in the Basilica
There are several architectural and artistic beautiful treasures you can't see anywhere else: first of all, St. Paul's tomb. It is situated inside the central navy, and the sarcophagus was found at the beginning of 2000. However, there are an unlimited number of works you can see in the Basilica, for example the cloister of Benedictine monks is really worth of a visit: it is a court surrounding a green garden, surrounded itself by little decorated columns, and on the walls around it, you can see funeral remains found in the necropolis. Inside the basilica, there is also a museum, where you can admire pictures representing the saints and the holy Mary, but also holy furniture and funeral remains from the previous versions of the basilica. Immediately outside the court, you can visit the archaeological area "Orto dei Monaci". You can see part of the necropolis, but also the remains of Paolino district.