Trinità dei Monti stands on the top of the famous steps in Piazza di Spagna, and it bewitches visitors from any perspective they look at it. Stage of legendary films, runaway shows, events and concerts, it has astonished millions of people all over the world by its legendary charm. Trinità dei Monti is the long and romantic stairs, cult of the capital. Many people, flowers, sculptures and gardens surround the tower bell of the church Louis XII built, one out of the five French churches in Rome.

The history and the origins of Trinità dei Monti
Trinità dei Monti was built in 1502, by the will of Louis XII, king of France and owner of the land. It is characterised by a Gothic style, according with the most important architectural trend of the time, in France. The Christian temple was completed in 1519, although new parts were made throughout the sixteenth century. According to the King of France desire, the building was made with white stone, collected near the town of Narbonne.
Over the following century, the two large symmetrical bell towers were built, too, designed by Carlo Maderno and Giacomo della Porta. The church was consecrated by Pope Sisto V, in 1585, and in the same period, also the clock and sundial were added, respectively situated on the left and on the right tower bells. The last portion of the staircase before the entrance of the church is called Scalinata di San Sebastianello, opening on the square in front of Trinità dei Monti. In the middle of the square, however, the large Sallustian Obelisk stands, built by architect Antinori by the will of Pope Pio VI. It was brought to Rome by the Emperor Aurelian, and put in the Horti Sallustiani, as its name suggests. The obelisk is almost 14 metres up, made of red granite and decorated in Rome, copying another obelisk situated in Piazza del Popolo.
For centuries, it has been abandoned in the Horti Sallustiani, after the army led by Alaric was shot down, in 410. It is very important to know this obelisk is the only one showing the Christian cross with a different symbol: next to the most important icon of the Christian religion, you can see the lily of France, a symbol you can see also on the steps below.

A one-of-a-kind church
Trinità dei Monti is one of the best known places in Rome, and its extraordinary architectural harmony, together with the high number of fine works, make it a real treasure of art. If in addition to walk up the stairs and observe the building from the outside, you would like to visit the internal part of the church to appreciate all its glory, you will not miss the peculiar details and many frescoes. They occupy each one of the chapels and depict the saints and their stories, some of them from the new and the old testament.
In the chapels on the left, you can admire a pictorial cycle telling the Stories of St. John the Baptist, made by the master Giovan Battista Naldini. In the third chapel on the left, instead, there is an extraordinary cycle of frescoes, by Daniele da Volterra. Vasari was entrusted with a fresco portraying the Assunta and the Presentation of the Virgin, both located on the back wall, dating back to the mid-16th century. During the visit, you can be easy caught by the Orsini Chapel, where the Scourging is situated, a wonderful altarpiece by Louis Vincent Leon Pallière, dating back to 1817. 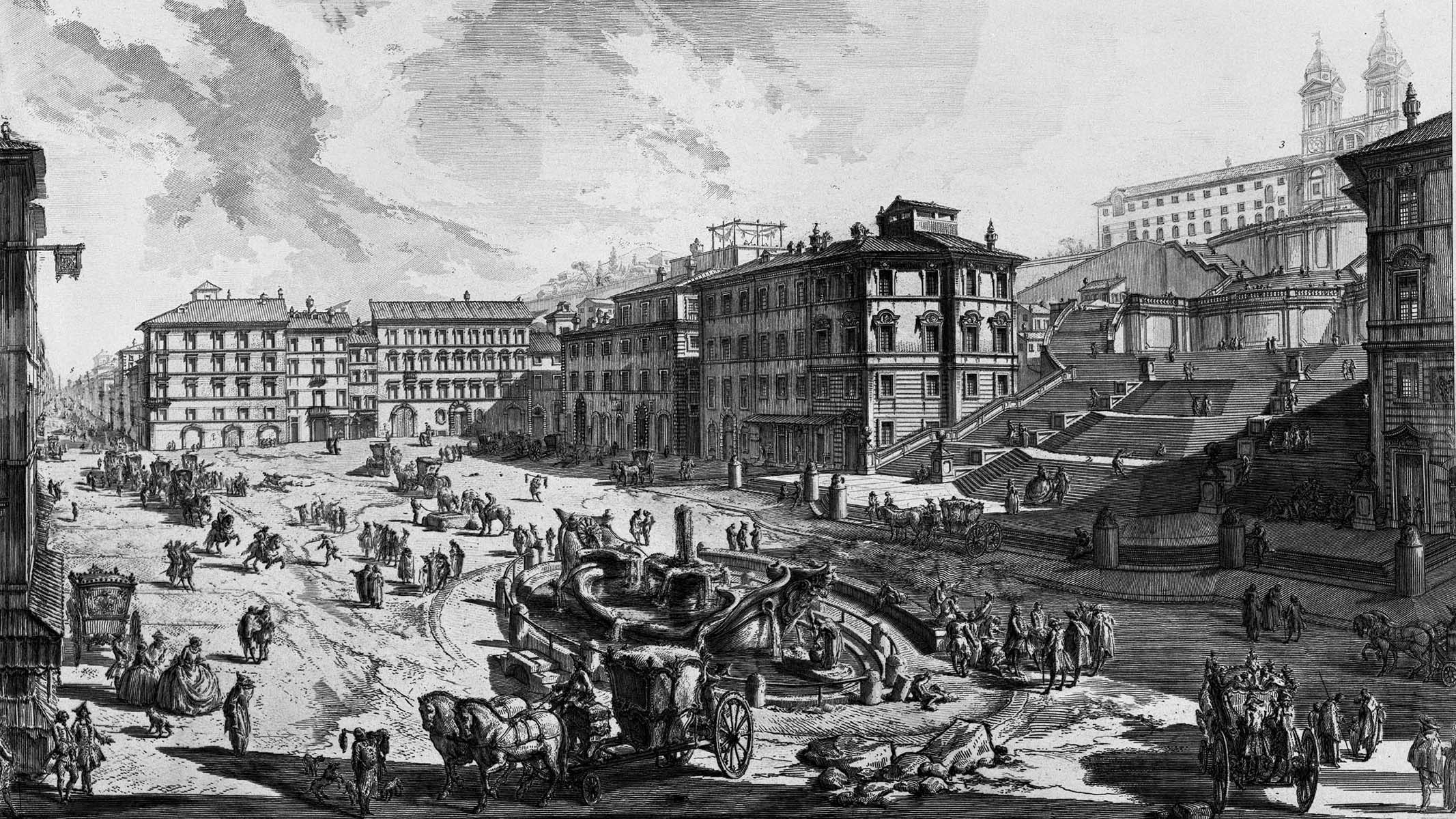 The stairs in Piazza di Spagna
A few years after the built of Trinità dei Monti, many projects were made to connect the church and the square, including one about the built of a large fountain, judged unfeasible because of its huge cost. Cardinal Mazarin had the idea for first, in 1660: his death, however, caused the abandonment of the project. In 1720, Francesco de Sanctis presented a new and fascinating design, quickly approved by the French people, still owning the land, at the time. Pope Innocenzo XIII Conti, however, asked to eliminate the foreign prints, including the several French symbols and the equestrian statue dedicated to Louis XIII. After the corrections to the initial project - considered excessively French - the stairs was quickly brought to completion. In 1726, the most interesting peculiarity was the alternation of curved segments, straight strokes and terraces, matching with Baroque art. The solution was very appreciated by the people, as they loved its great comfort. It is made of 136 steps, and among the several symbols, you may discover the Eagles representing Innocenzo XIII Conti and the lilies of France.
Today, Piazza di Spagna is one of the most loved squares by the thousands of tourists who daily visit the capital, sitting there to enjoy a moment of rest or admire a so much romantic and fascinating place, to breathe its magic atmosphere.

The surroundings of Piazza di Spagna and Trinità dei Monti
After a stop in front of the obelisk and having admired the stairs from above, as well as from any other possible perspective, you can discover everything worth of a visit in the surroundings, and you should know the attractions are not just a few! Moving away from Piazza di Spagna, in a few minutes you will reach another splendid square, Piazza del Popolo, famous also for its obelisk and its two twin churches. Halfway, you can access the beautiful Villa Borghese, the park where the Galleria Borghese Museum is situated, easily accessible by the footpath. It is one of the most visited museums of the capital. That's not all, because only a few hundred metres far from there, the Ara Pacis shows itself, the mausoleum of Augustus, hosting the museum of the same name.