Villa Sciarra: a hidden treasure at the feet of Gianicolo!

Villa Sciarra is situated at the feet of Gianicolo, surrounded by Via Dandolo, Via Calandelli and Mura Gianicolensi. Since the ancient times, the area has always hosted gardens and vegetable gardens: the holy wood of nymph Furrina was situated there: in 121B.C., Caio Gracco was killed by one of his slaves, after the escape from the Aventino hill.
A few years later, the area was incorporated by the large green area known as the Horti Caesaris, getting down from Monteverde, until the river banks. A legend tells Julius Caesar hosted Cleopatra there, during her stay in the city. The residence was built in 1575, by the will of Innocenzo Malvasia: he ordered the built of the casino with the same name, on two floors, and equipped with a lodge.From that moment on, Villa Sciarra has been affected by periods of richness and less lucky ones, until the great restyling made by its last owners. If you want to dip yourself in an atmosphere with no time, in the heart of the most beautiful districts of the Italian capital, Villa Sciarra is the perfect stop you can't miss in your tour.

A park enchanting at the first sight
In Monteverde, Trastevere and Gianicolo districts, the capital of Italy shows two wonderful green oasis, considered the most beautiful ones in the city: Villa Sciarra and the near botanical garden.
If you want to immerse yourself in a big but well-organised park, featured by elegance and fascination, Villa Sciarrais the perfect place for you. The park is situated near Mura Gianicolensi, and it takes its name by the papal Sciarra’s family, owner of the park ,at the end of the 19th century. In the second half of the 16th century, the area was slowly built up, starting from the construction of the casino, wanted by Innocenzo Malvasia.
A few years later, the estate passed to the Barberini’s family, and then to the Sciarra's, until the last owner - George Wurts - bought it, in 1902. The latter restyled it and designed the park again, decorating it with statues from the 18th and 17th century, with a big aviary,a little temple, and a little neo-gothic castle. WalkingAround the park, you can still see the evidences of the fashion the last owner of the residents had,taking care of this wonderful park in the centre of Rome.
Wurts and his wife enrichedThe garden with many Rai plants, such as palms,seedrs, ginko biloba,and many others,offering shadow during the hottest days of the summer.Atthe same time, many new samples of White peacockswere introduced in the park,so that it was called "the park of the white peacocks" Two years after George Wurts's death,his wife donated the park to the Italian state, asking it was moved into a public park, to thank the city. Although the institutions paid a few attention on this wonderful treasure, the park still enchants tents of visitors every day. 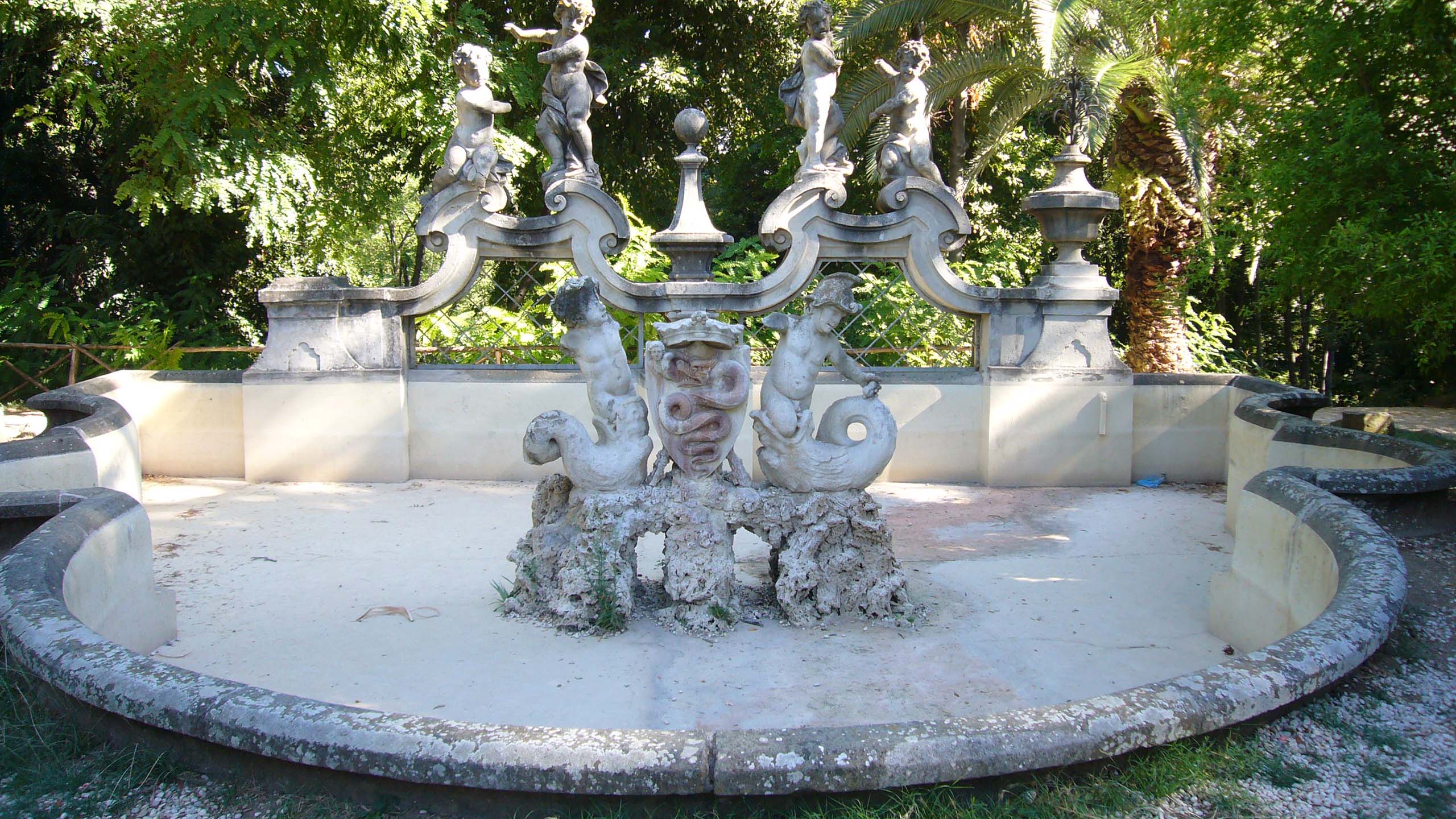 The several areas of Villa Sciarra
Some inscriptions say in the area there was are religious place, dating back to the first century A.D.
You can still see some remains of the Sanctuary, and they are divided in three main sectors: a rectangular courtyard, and two side areas, where many sculptures have been found, set as an Egyptian black basalt statue, decorated by golden face and hands.
The recent history of Villa Sciarra started later, in the 15th century, when the first building was built near a vineyard, property of the church Santa Maria ad Martyres. After having been owned by different owners, in 1653, the park got even more important, because it became an urban park, after the built of Gianicolo walls.
After the changes ordered by Barberini's family, in 1849, the park became theatre of many struggles between Garibaldi and the French army, led by General Oudinot: the damages that affected the park were very serious, and they got only partially recovered by Prince Maffeo II Sciarra; the latter finally lost all his heritage and the park itself, after some financial mistakes. A part of the park became property of Comune di Roma, it was recognised as an area where it was possible to build, but the remaining part was donated to the community. In 1902, as we have already mentioned, the area was bought by the last owners: George Wurts and his rich wife Henrietta Tower; they ordered the complete restyling of the area, giving it a new Renaissance style, perfectly fitting with the aesthetic rules of the time.
The tour of the park starts at the main entrance, situated in Wurts square, where you can see the Fontana dei Faunetti, attracting visitors with the tubs and the little fauns, playing with a little goat. Near the second entrance -the one situated in Largo Minutilli -,you can see the Fontana dei Fauni, made of a big semi-circular tub, hosting the statues of some little fauns. The building maintains its original plant, and it is made of three arches and one portico facade, from where you could enter the internal court, moved into a library in 1932.
The building culminates in a wonderful terrace, surrounded by a little tower and five big sculptures: four of them represent the continents, and the other one the parts of the day. In the open space in front of the building, there are two fountains: the one of the Human passions (or vices) and the Snake (or Angels). The laurel exedra is wonderful, with its twelve recesses containing statues representing the months of the year. There are hedges representing wonderful shapes, witnessing the love the last owners had for the park.