Villa Sciarra: a peaceful oasis, at the bottom of Gianicolo hill

If you are on holiday in Rome but you don't want to visit only touristic places, and you prefer to leave the city as the Roman citizens do, you can't miss Villa Sciarra, the Peaceful oasis at the bottom of Gianicolo hill. Meters and meters of narrow lanes in the nature, rich in beautiful works of art, surrounded by all over the year plants: Villa Sciarra is a real historical natural park to be discovered.

Villa Sciarra, a peaceful oasis at the bottom of Gianicolo hill: historical information
The history of this fascinating green space in the beautiful centre of the city, a few steps from Trastevere district, is very ancient, probably dating back even before the ancient Roman people. Thanks to some evidence if we have discovered the park was the site of a sanctuary to pray Syriac divinities. Concerning its origins, Villa Sciarra should have been the place where Emperor Caio Gracco was killed by one of his faithful slaves: it is said the exact point where the homicide took place was the holy wood of Furrina nymph.
Villa Sciarra has been restored many times by the centuries, and several important people have lived there. Always the site of gardens, Pope Urban VIII ordered the restoration in the first part of the 17th century, transforming it in an oil burner residence surrounded by walls. In the 18th century, Giulio Cesare Colonna di Sciarra and his family lived there: his wife bought the building from the Barberini's, a noble family. After them, the rich Wurts and Henriette Tower - he was a botany lover, and she was a rich heir from Philadelphia - bought the building on May 15th, 1902; during the 30s, the residence was given to Benito Mussolini, the one who gave it to the Roman citizens, making it a public park.

What you see if you visit Villa Sciarra, a peaceful oasis at bottom of Gianicolo hill
In addition to the several plants - you should know the Wurts Head planted also some exotic decorating plants -, you will find many elegant fountains: the fountains of the fauns, the fountains of the little fauns, the fountain of the cupids, and the fountain of the vices. You can also admire a tree exedra made of twelve statues, depicting the months of the year. You can't miss a visit to the historical Casino Barberini and its terrace, offering you a breathtaking panorama. Let's say something more about each one of these elements.
Vegetation in the garden. It is made of Mediterranean plants, such as oaks, pines, and laurels, together with several palms and exotic plants. The residence is 7 hectares large, and it hosts a big aviary made of iron, built by George Washington Wurts.

The tree exedra. The project of this area started when the building was the Wurts' residence; it should have been inspired to the Italian baroque style. The sculptures, as mentioned, depicted the twelve months of the year, but also some gods: Apollo and Daphne, Pan and Syringe, and Diana and Endymion.
The Fountain of the fauns. Probably from Lombardy, it is situated not far from the entrance of the park, in Largo Mitulli, and it is made of a couple of fauns, together with their children keeping an open shell in their hands. On the top of the work, you can see a cupid coming out from the mouth of a big grass snake: according to some art historians, it should be a symbolic illusion to Visconti's coat of arms, from Milan. 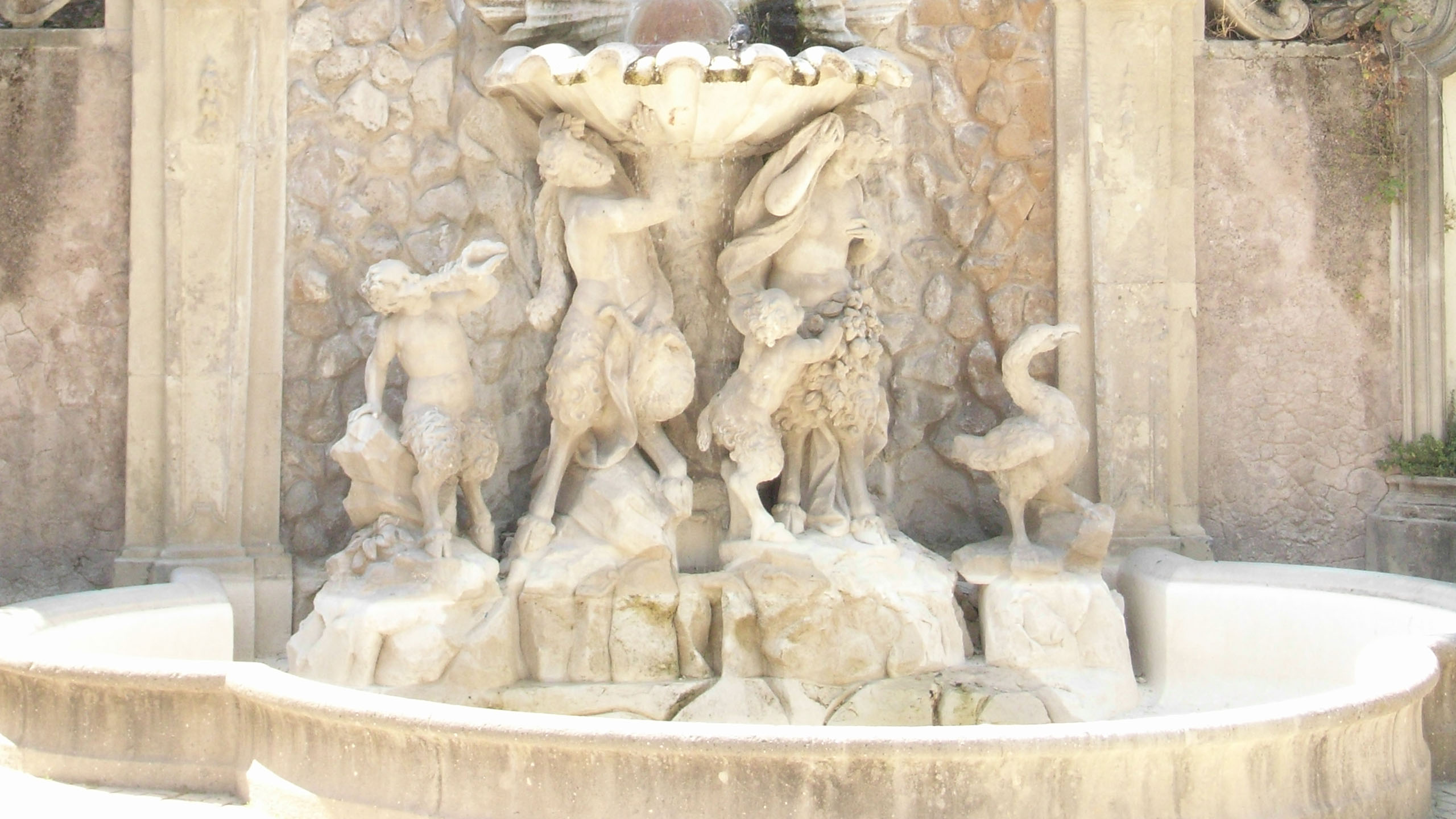 The Fountain of the little fauns. Also this fountain should come from the same territory of the previous one; it should be made between the 18th and 19th century. The work - within an oval cup - is made of a couple of cupids playing with a goat. From the fountain, two small jets of water flow out.
The Fountain of the big grass snake. It is also known as the fountain of cupids, is it is made of two cupids that dance together, with other two hands coming out from two dolphins mouth. One of the two cupids of the last couple is wearing a helmet, while the other one is hanging a shield representing Visconti's grass snake.

The Fountain of the vices. Its name comes from the four sphinxes symbol of the human passions or vices: anger, luxury, parsimony, and gluttony.
Sphinxes are located inside an ovoid tub, made of masonry.
Casino Barberini. The name of the building comes from the family who built it in the 17th century. Its shape - it is a triangular tower - remembers the coat of arms of Maffeo Barberini's wife, from the Giustiniani family. In the mid-19th century, during the period of the Roman Republic, the Casino was damaged by the struggles between Republicans and French people; however, Barberini's restored it some years later, respecting its original architecture. Under the Fascist Italian domination, Casino Barberini was the sight of the Istituto Italiano di Studi Germanici, while today there is a which library. 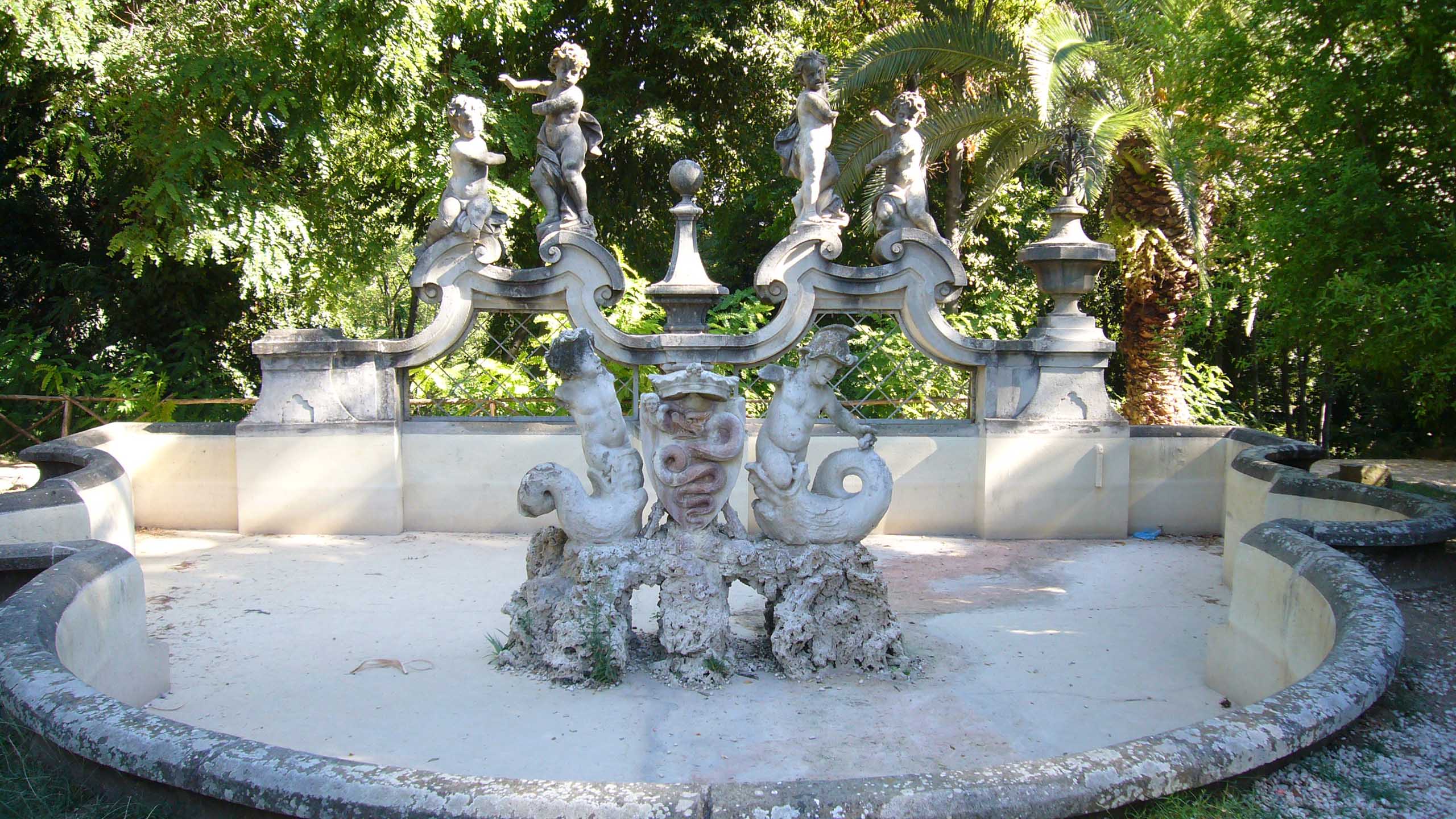 What's around the park
Villa Sciarra, an oasis of peace at the bottom of Gianicolo hill, is situated in the middle of Trastevere and Monteverde Vecchio districts. Going out from the park, you will be able to have a romantic walk along the river banks, pressing the perfumes and the typical flavours of the capital of Italy. From Monteverde side, you will be able to admire the elegant buildings from the beginning of the 20th century, eating in very elegant restaurants.