When you talk about holidays and tours of greatest interest in Rome, you usually immediately think about the Colosseum, the Vatican City and many other attractions of great artistic and cultural value. But Rome can really be considered an open-air museum, and perhaps not everyone knows along its streets there are also several examples of places that currently deserve to be visited even if they originally had a different function. A typical example is the Montemartini power plant, a beautiful example of reconversion that has allowed the perfect integration of classical art and industrial archaeology. Let's discover together the steps of this peculiar reconversion.

The birth of Centrale Montemartini in Ostiense district
The inauguration of the Montemartini thermoelectric plant dates back to June 30th 1912, and it represents the first evidence of a public power plant for the production of electricity supplied by the then Azienda Elettrica Municipale - the Municipal Electrical Company -, the current ACEA. The name of the plant derives from Giovanni Montemartini, one of the most authoritative and skilled Italian economists and promoters of the theory of the municipalisation of public service companies. The Bollinger company - from Milan - took care of the built of the power plant, mainly using reinforced concrete as basic material, and it was carried out on an area of over 20000 square metres between via Ostiense and the near bay of the Tiber. One of the main features you will immediately see is the majesty of the power plant that, according to the aims of the creators, should demonstrate the ability of the company to autonomously produce the services the citizens needed. Analyzing the internal architecture, you can also see how the functional needs are completely integrated with a fair sense of aesthetics. These two aspects can be seen in several details, such as the long internal walls with pillars that support the attic with a skylight in the centre, or in the terrace favouring the thermal isolation, or in the internal rooms differentiated according to the machinery they have to accommodate.

A little bit more history about Centrale Montemartini
The Fascist age brought several improvements to the Montemartini power plant. In 1933, Benito Mussolini inaugurated two new and powerful diesel engines to produce electricity and to realize a new pavement with mosaics, to further exalt the aesthetic appearance. The development of the power plant continued to face the greater energetic consumptions, previewed by the organization of the Esposizione Universale, an exhibition that has never taken place because of the war. During the war, after the bombardments, it suffered slight damages, but the production of energy continued, it indeed increased in the period immediately after the liberation, taking charge of the energy needs of the city. The Montemartini power plant stopped it production of electricity in 1963, it was obsolete and it was not convenient to make further investments. 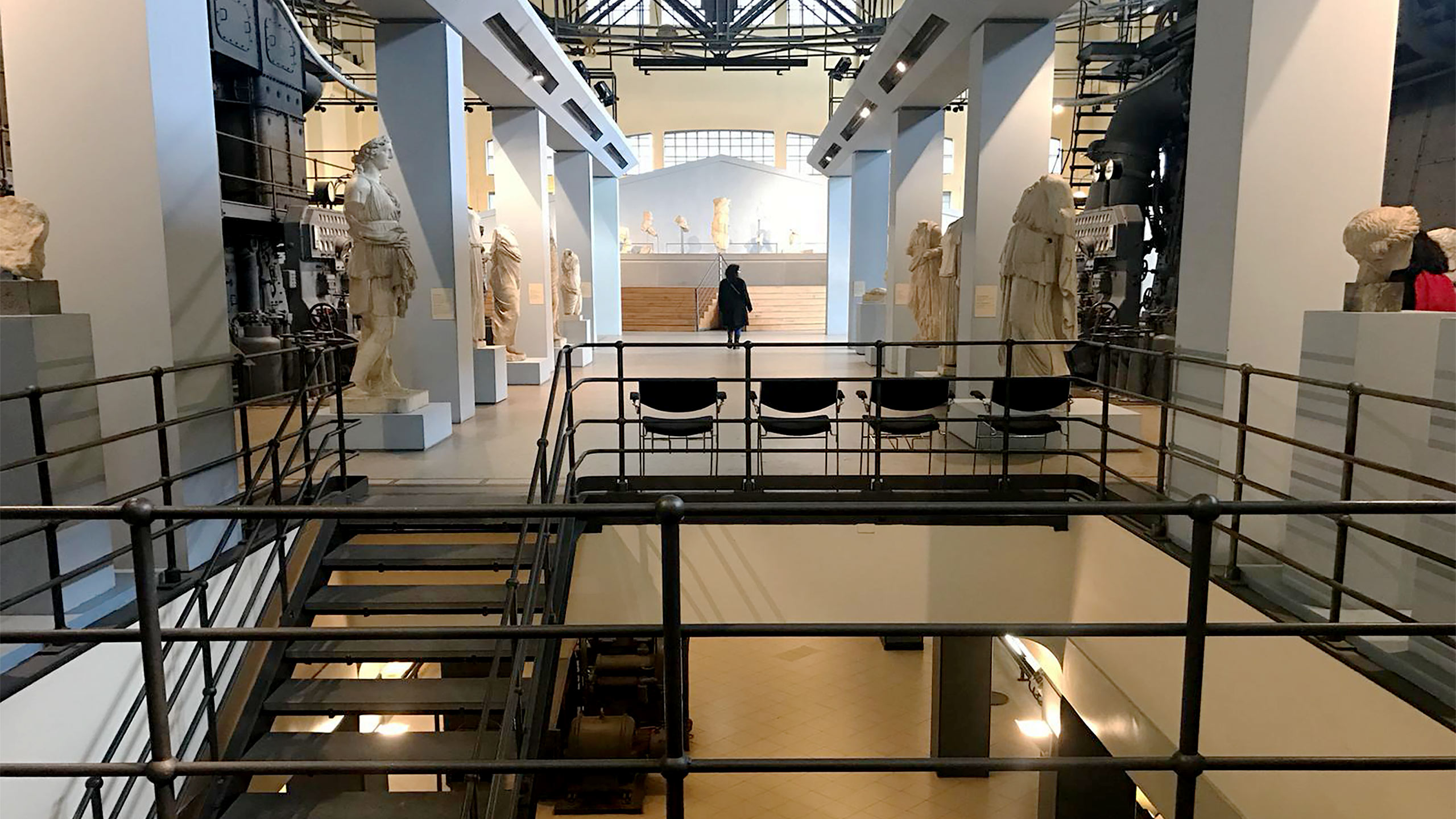 The recovery of the Centrale Montemartini
For approximately 20 years, it remained completely abandoned. The recovery was strongly desired by the ACEA, which would have liked to use the area to create a multi-purpose centre dedicated to the tertiary sector. Thus the renovation works began, mainly concerning the engine room and the boilers, respecting shapes, decorations and original machines, and re-proposing the original steam turbine of 1917. The real step change that started the reconversion and recovery project took place in 1997.
In that year, the Musei Capitolini underwent a renovation, so a part of the sculptures exhibited in the rooms had to be temporarily moved to another location. It was therefore decided to place a hundred sculptures inside the headquarters of the Montemartini power plant. The opportunity provided by the restyling of the Musei Capitolini was exploited to plan an exhibition, entitled "Le macchine e dei Dei" - "machines and gods" - which represented the first example of interaction between classical and industrial archaeology. The exhibition highlighted the peculiar contrast between the production machines of the old Montemartini power plant and the sculptures of the Musei Capitolini located next to them, in addition to jewellery, artefacts and objects found during the excavations carried out between the late nineteenth century and thirties of the twentieth century. So, an artistic course was created, starting from the ancient Roman city of the Republican period till the Imperial age. The whole organization, the preparation of the rooms, the restoration of the machines and the organization of an educational section, were entirely paid by ACEA.
The initiative had a great success, also thanks to the peculiar background and to the successful outcome of the event, despite to the return of a high number of sculptures to the original site, so that ACEA and the organizers decided to go on this path.
Today, you will actually have the opportunity to admire some of the remaining sculptures and all the newly acquired collections of the Musei Capitolini in the halls of the Centrale Montemartini. The interior spaces are always analysed to find new exhibition solutions to enhance both the exhibited objects and the interiors, and to ensure a close interaction between the museum and the ancient urban background of Rome.
The permanent museum of the Montemartini power plant has also allowed an important redevelopment of the Ostiense district, now starting a new reconversion, of the old industrial area which will become a new cultural pole, able to to attract greater visitor flows. This plan will concern the Gazometro, the Slaughterhouse, the plant of the former Mira Lanza and the Mercati Generali, and it aims to become site of a part of Roma Tre University, together with the realization of the new complex of the City of Science.