The historical and artistic heritage of Rome is unlimited, and there is no place or work of art not deserving a visit more than another.
If you are spending a few days on holiday in the Italian capital, you have to dedicate some time to Michelangelo Buonarroti.

1. Who is Michelangelo Buonarroti?
Michelangelo Buonarroti was born on March 6th, in 1475, near Arezzo, and he died on February 18th, in 1564. He has always been considered an eclectic and genius artist, concerning painting, sculpture and architecture.
His love for art began when he was 13 years old: he moved to Florence, became an apprentice of Domenico Ghirlandaio, and studied Giotto's and Masaccio's works.
Afterwards, Lorenzo de' Medici invited him to his court, where he learnt anatomy. During the following years, he realised the Pietà - in 1496 - and the David - in 1501 -, to finally make the Sistine Chapel's vault in the Vatican, in 1508. In 1516, he returned to Florence with the dual role of architect and sculptor; in 1534, he went back to Rome to realise the Last Judgement on the wall of the Sistine Chapel. He dedicated the last years of his life to architecture, and at the age of 72, he held the position of works director for the construction of the Basilica di San Pietro. He died while he was realising the Pietà Rondanini. Rome hosts many of his masterpieces, including sculptures, paintings, and architectural works.

2. The sculptures
The list of sculptures worth of all your attention is really long; among the most valuable you are Pietà and the Moses.

2.1 The Pietà
The Pietà is located in the Basilica di San Pietro, in the first chapel on the right of the nave. The sculpture, depicting the dying Christ in the arms of a young Virgin, is 174 centimetres tall, 195 wide and 0.69 meters deep. As you can see, the marble complex has a pyramidal shape and the Christ appears immediately smaller than the Madonna. This game of size and the effect created by the folds of the robe of Mary are a clear allusion to Jesus childhood.
Observing the work, you can get another very interesting detail: inside the mouth of Christ there is one extra tooth (the fifth incisive). 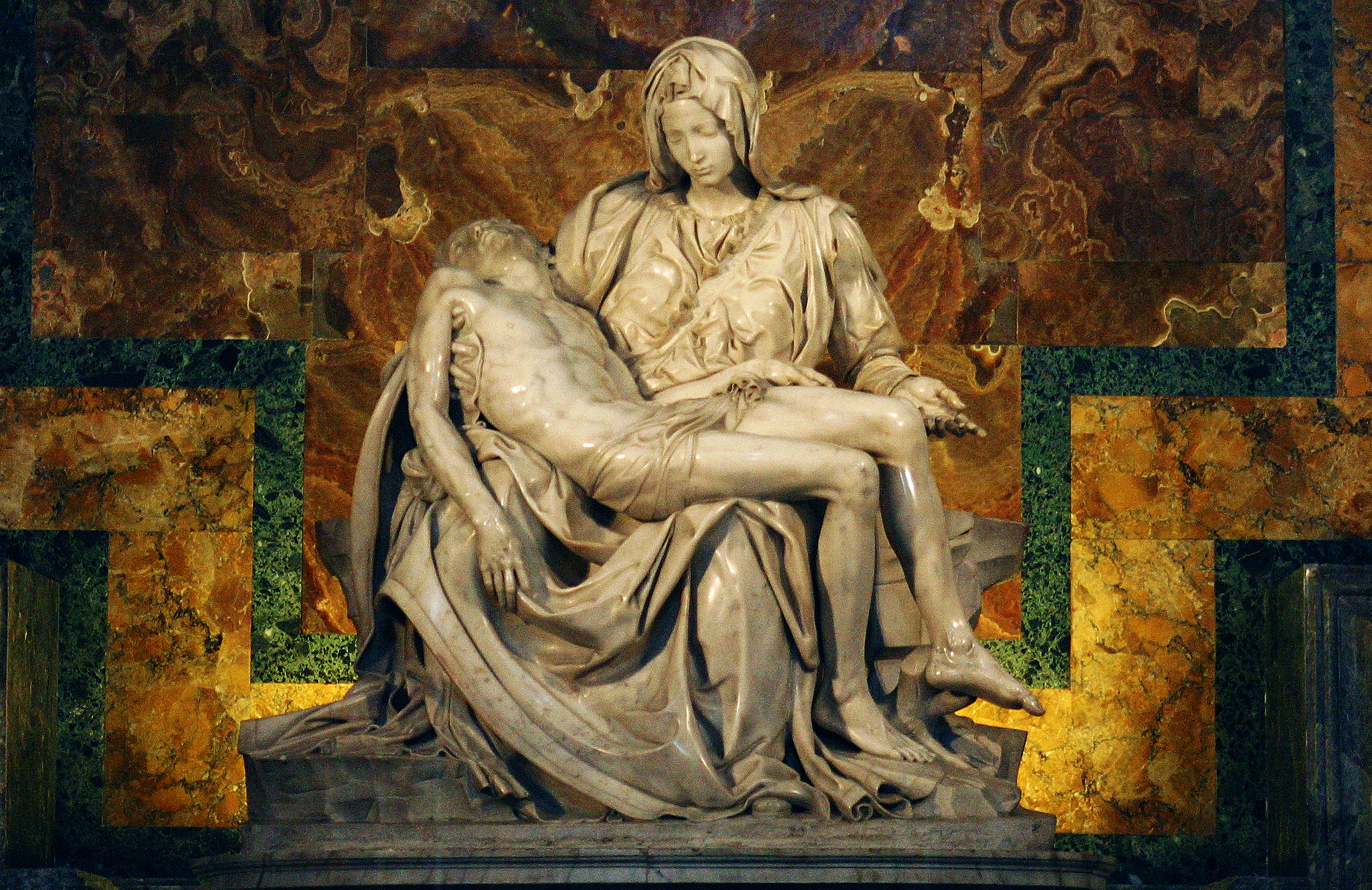 This element, better known as the sin tooth, is inserted in various works by many Renaissance artists, and it seems to be related to negative characters. In this case, Michelangelo wanted to underline how the dying Christ takes upon himself all the sins of the world.

2.2 The Moses
The Basilica of San Pietro in Vincoli, in Monti district, houses Michelangelo's Moses. The statue, located in the right transept, was made in 1513, and it seems it had to adorn the tomb of Pope Julius II. The main character of the sculpture is a majestic Moses depicted in a sitting position, holding the tablets of the law under his arm and gently caressing his long beard.
With this work, Michelangelo describes the moments after the delivery of the, commandments on the Sinai Mount: Moses is portrayed with swollen veins and tense muscles,, unmistakable signs of his anger towards the Israelites, committed to venerating a golden calf.

3. The paintings
The most valuable paintings include the Sistine Chapel ceiling and the Last judgment.

3.1 The Sistine Chapel vault
The Sistine Chapel, in the heart of the Vatican City, has a vaulted ceiling with an area 500 square meters large. The decorations are inspired by the Old Testament and nine episodes of the Genesis (sacrifice of Noah, Noah's flood, the creation of Adam and Eve, etc.).
On the long side of the vault, there are 20 young naked statues - the Ignudi -; the largest walls, divided into 8 triangular sails and 16 lunettes below, are decorated with biblical scenes and Christ's ancestors. The whole work, focused on the centrality of the man in the universe, is a collaborative effort of Michelangelo and the theologians of the papal court. The latter actually helped the artist to correctly realize the iconographic representations; finally, there is a certain connection with the frescoes already present along the walls before the new works.

3.2 The Last Judgment
The fresco is situated on the rear wall of the altar, in the Sistine Chapel. The undisputed star of the opera it is Christ, represented in the moments before the verdict of the Last judgment; next to him, there is the Virgin Mary with the head facing to the left.
The elected are welcomed into the Heaven, while the damned thrown into the hell. In the middle of the fresco, you can also see Saint Peter holding two keys, Saint Lorenzo with a gridiron, Saint Sebastiano with the arrows, and Saint Bartolomeo with the skin where the doctor and humanist Francesco La Cava said there is Michelangelo's face.
In the lower part, there are the angels playing long trumpets, the risen people, reaching the sky, taking their body back again - the resurrection of the body - and the angels that, together with the demons, launch the damned to the Hell. A last detail worth of a reflection is the presence of Charon and Minos: it is a clear allusion to Dante Alighieri, the author of Hell, depicted among the souls rising to the sky.

4. Architectural works
The project of the famous dome, symbol of the capital was made by Michelangelo, who received the commission in 1547 and worked on it until 1564, year of his death. The work was completed by Giacomo Della Porta who made some modifications.
The famous Porta Pia, located in the Nomentano district, has been modified several times, dating back to 1561-1565. Another place you have to visit it is the Sforza chapel in Santa Maria Maggiore church: we can consider it the last big work by the Florence artist. The project Michelangelo did when he was 87 years old is characterized by a big elliptic space surrounded by columns. The construction jobs work completed by Tiberio Calcagni.