Visiting Rome: The masterpieces by Raffaello in the Eternal City

Raffaello Sanzio from Urbino, known simply as "Raphael", is considered one of the three masters of the Renaissance, together with Michelangelo and Leonardo Da Vinci. Raffaello worked on a set of works that inspired the European painters of later generations. The artist's brief life can be divided into three phases. Since his birth in 1483 until the age of 21, Raffaello had lived in his hometown of Urbino, where he began his studies with the Umbrian master Pietro Perugino. In 1504, he moved to Florence, where he intensively studied for four years, before going to Rome, where he created an incredibly large collection of masterpieces before his sudden death at the age of 37. As you try to understand the artist, walking on his footsteps and admiring his masterpieces is the best goal in Rome.

Raphael's Rooms in the Vatican Museums
In the papal apartments of the Vatican Museums, the four Stanze di Raffaello were decorated by frescoes, by Raffaello and his students, during a period of 9 years. The first room, painted between 1508 and 1511, was the Stanza della Segnatura, and it houses Raphael's famous "School of Athens". The second is the Stanza di Eliodoro, the artist worked in from 1510 to 1514. As the first two rooms were painted by Raffaello himself, his students took on most of the responsibility for his drawings in the Stanza dell'Incendio di Borgo (1514-1517), depicting the great fire of the village in 847. D.C., and the Room of Constantine (1517-1524), completed after the artist's death.
Of the four decorated rooms, the School of Athens is the most famous painting and probably one of Raphael's greatest successes. This iconic fresco, described as "the perfect embodiment of the classical spirit of the Renaissance", depicts a large group of philosophers gathered on the steps of a large building. Plato, Aristotle, Socrates and Diogenes are just some of the famous characters identified, although art historians continue to discuss the identities of some of them. Raffaello also portrayed some important contemporary artists, such as Leonardo da Vinci, Michelangelo, Heraclitus, and himself too, highlighting the link between Renaissance Italy and ancient Greece, thus powerfully creating a sense of unity and continuity that runs through the centuries. The Room of Heliodor is a celebration of God's intervention in protecting the church from evil, inspired by the recent defeats of Pope Julius in battle.
In the first painting, the Syrian usurper Heliodor is stopped as he raids the temple while Pope Julius looks with approval on one side. The most surprising one is Peter's release from prison. The Incendio di Borgo is the most complex of the four episodes of the Room. It is full of references to classical antiquity, medieval architecture, to the time of the affirmation of the Church and to the themes used by contemporary artists. The intercession of Leo IV is celebrated, responsible of the fire end. The event took place in 847 A.D. and it is documented in the "Liber Pontificalis". The structure of the composition is complex: two colonnades of clear classical derivation define a square, the Pope, who still bears the features of Leo X blessing the frightened crowd; the facade of old Saint Peter appears behind him, in the background, as the characters in the foreground are desperately trying to put out the fire; the female figure with her back towards us is imploring them to look at the only effective source of help, the pope. 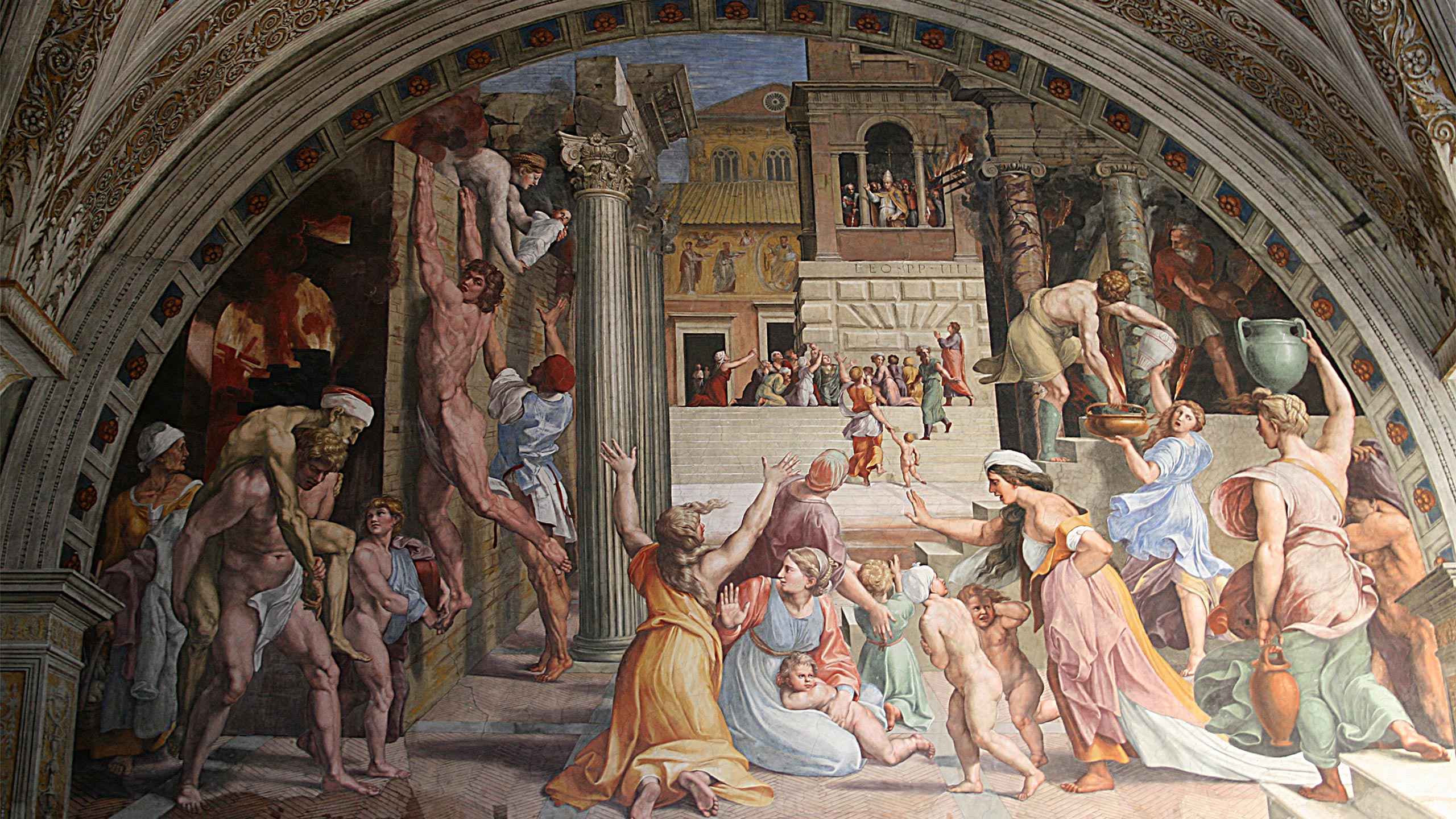 Pinacoteca Vaticana
Raphael's works stand out even among such an impressive collection as the Pinacoteca Vaticana. In Room VIII, The Coronation of the Virgin (1503) and Madonna di Foligno (1511) are placed on both sides of the centre of the room called "The Transfiguration" (1520). When Raffaello died, the work was found incomplete in his study and brought before his funeral procession; today, it is considered the greatest masterpiece by Raphael. Room VIII also includes detailed tapestries made in Flanders, now called Belgium, according to Raphael's drawings.

Galatea, Cupid and Psyche at Villa Farnesina
Villa Farnesina, the private Renaissance residence of the sixteenth century in Trastevere, has frescoes by Peruzzi, Sebastiano del Piombo and Raffaello himself. The Lodge of Galatea (1514) shows the cupids with arrows, whereas the Lodge of Cupid and Psyche is highlighted by its cycle of ceiling frescoes of mythological inspiration (1517-1518). The triumph of Galatea is the first purely mythological scene that the artist has painted, representing the ideals of love and beauty through the Greek fable of Galatea and Pygmalion.
Raffaello had a very huge sense of beauty, so he did worked on incorporating female models into his study. Nevertheless, the Triumph of Galatea is the favourite one according to the correspondence with Chigi. Concerning Cupid and Psyche lodge, it was realised thanks to the help of his disciples, as in that period the artist spent a lot of time with his girlfriend Margherita Luti, also known as La Fornarina or the "daughter of the baker". Her famous portrait is in Barberini palace. It depicts a woman in a room with her head covered by a silk turban decorated by a pearl brooch; she wears only a dress that wraps her softly, gently caressing her breast with a clear reference to the pose of Venus. Her smile is compared to Mona Lisa's. During a restoration in 2001, X-rays revealed an impressive piece of jewellery on the ring finger of the left hand, suggesting Raffaello intended to marry Margherita.

The Sibyls in the Church of Santa Maria della Pace
The Church of Santa Maria della Pace houses the fresco of the Sibyls (1514) by Raphael. Art historians suggest it was largely inspired by the ceiling figures of Michelangelo's Sistine Chapel. Raffaello left the large painting of the Transfiguration (now in the Pinacoteca Vaticana) almost finished in his studio. The artist died of a sudden fever at the age of 37 and asked to be buried with his girlfriend during the illness.