A more than 2000 years long timeline hugs Rome, the Eternal City par excellence. An historical evolution that sweetly left tangible evidences of the time, all over the Roman surface. An inexorable time passing, sometimes turning apparently simple frames into memories you will always remember. The beauty of Rome has no limits and it is hardly quantifiable, being able to link the running future to a past not to be forgotten.
This heritage is so precious it must be protected. The history of Rome is made of glory and falls: cycles that have never affected the beauty that will be remembered in history books, forever, as well as in the souls of those who visit a city with a thousand faces and a charm without boundaries. As previously mentioned, there are numerous sites you could visit in Rome. However, in this case we will focus on a place so unknown as rich, but equally full of charm. The place we are talking about is a site offering you a very original tour. Yes, because, after all, Rome is rational but irrational, organised in its disorder, pretty as a woman even more exquisite by its advancing age. Are you ready? Let's go then!

The Basilica of San Clemente in Rome: some historical information
Built in honour of Pope Clement I, as you could easily suppose, it is situated on the surface of three very typical neighbourhoods: the Esquiline, the Celio and the Monti districts. The building you can see today is not the original structure, but an extension of the neighbouring convent of the Dominicans. The first peculiarity that could make your visit to the Basilica of San Clemente engaging is its strategic position. It is actually located above some buildings of previous eras, almost like a young and beautiful prince protecting his subjects from injustice and calamities. The lower level is the most ancient one, dated back to the Imperial age, with its underground discovered and brought to light only in the second half of the nineteenth century. The excavation works were carried out by the then prior of the Dominican convent. Given the recent consolidation efforts, you can now visit these dungeons, enjoying their extraordinary beauty. History has been even more munificent there, leaving there evidences dating back to different eras. A sort of living historical book! 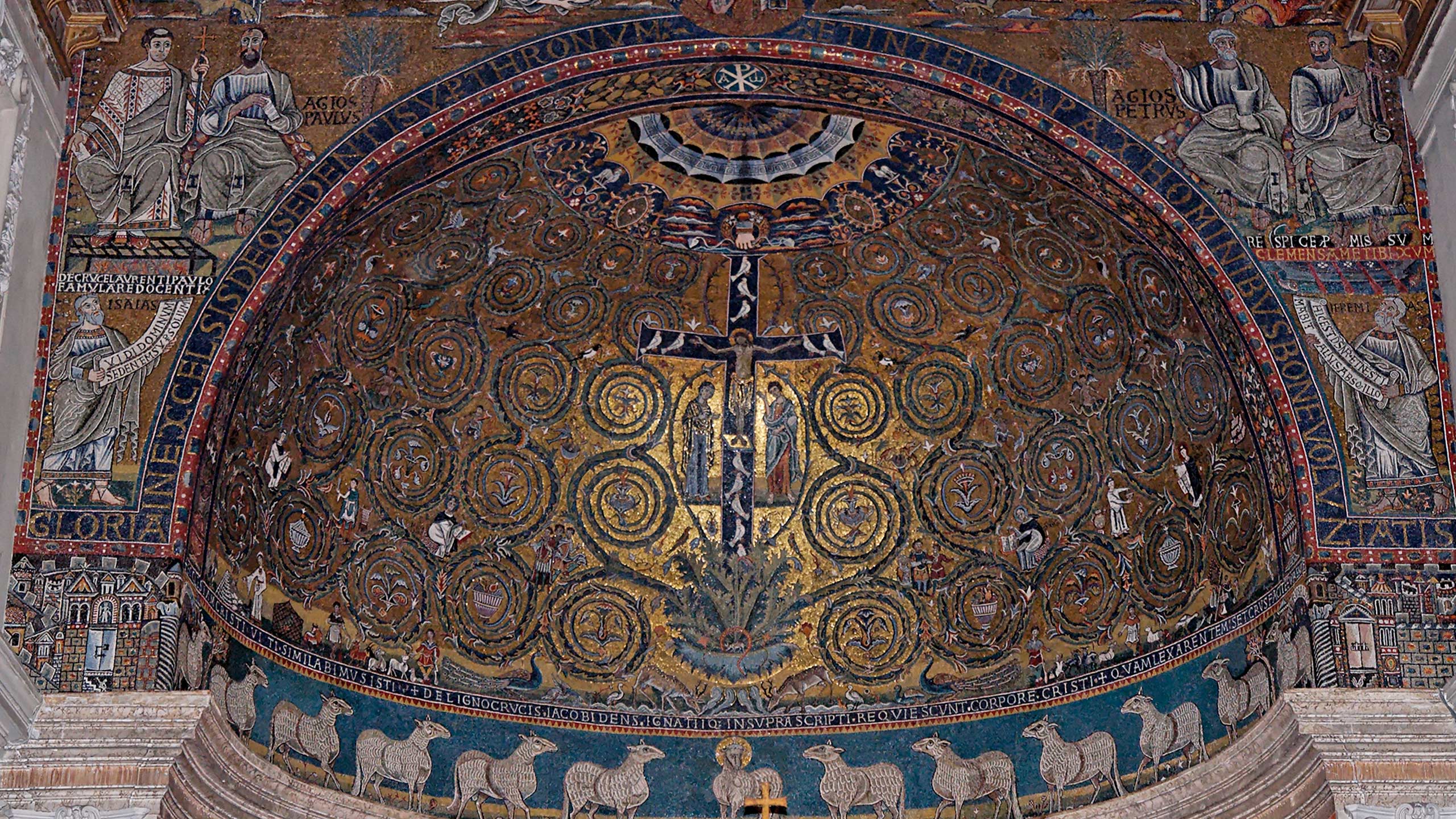 The upper Basilica
The construction and consecration of the modern basilica can be dated back to the 12th century. According to what some documents say, it seems Pope Pasquale II was appointed just inside of it, after having held the position of cardinal for many years, from 1076 until 1099. The upper Basilica of San Clemente was built on the ruins of the ancient church. Only the foundations were saved, later recycled. The reason why the old church was demolished is probably that it was ancient and rich in structural problems. The disfigurement occurred by a fire started by the Normans, after the Sack of Rome, in 1084. The new Basilica got the current conformation at the end of the eighteenth century, at the behest of Clement XI. The restoration work was entrusted to the famous architect Domenico Fontana, who personally took care of the current façade, whose features stand out for an elegance not ostentatious, but linearly sober. On the upper surface, the one overlooking the arcades of the portico, there is a large window, and on the side of the main section, you will admire a Baroque style bell tower completed only in the 18th century.

The old basilica
Some artefacts and documents will show you what the area once housed. The ancient Basilica of San Clemente seems to have been used by the then faithful Christian believers to profess a cult still connected to numerous bloody persecutions, perpetrated by the members of the pagan religion. What was an ancient patrician house was then gradually transformed, until it became a small and modest Christian basilica in the fourth century, characterized by three naves and an apses. Almost certainly, the inner courtyard was used as a Mithraeum, between the first and third century: it was a temple dedicated to the cult of the god Mithras. It is a religion coming from the far East (Asia Minor), a cult that spread with several proselytes. The ancient basilica enriched more its evangelical importance thanks to the presence of the relics of Saint Cirillo, known for having boosted the conversion process of the European populations of Slavic origin. Another merit of the saint was he brought the remains of Saint Clemente back to Rome - until then kept in the current Crimea.

The underground part
The ancient basilica - today under the modern one - still preserves some frescoes from the 9th, 10th and 11th centuries. Those representing the appearance of Pope Leo IV date back to the eleventh century. On the contrary, the stories of Saint Clemente and Saint Alessio can be dated back to some years before the abandonment. And if this is not enough to make you curious to visit the basilica, what follows will surely convince you. Some excavations have recently restored an ancient baptistery of Paleo-christian origin, together with a fresco representing the Madonna with Child. Also the catacombs are worth of note, surrounded by a gallery with sepulchres from the 5th century A.D. During the underground tour, don't forget to note a small branch of the Labicano, a small torrent that, pouring into the area around the Colosseum, fed the swamp of the Velabrum Maius, by its waters.