Visiting Rome: the Crypta Balbi of the National Roman Museum, an entire old district to be discovered

The origins of the Crypta Balbi
Lucio Cornelio Balbo was the one who decided where to set the Crypta; it was 13 B.C., and he wanted to renew the European plan completed by Agrippa and Augustus. Originally, there was a rather large theatre in the area, it was the third biggest one in Rome, after the Pompeo's one - we do not have any remains of it nowadays -, and after Teatro Marcello, that you can still see nowadays in its well-preserved conditions. Behind the theatre, there was a portico with gardens and fountains. on the other side of the building dedicated to the shows, there was a circular exedra, covered by a half-dome, surrounding a recess in the middle. The role of the exedra was connected to Balbo's Theatre: the rich Roman citizens who when to watch the shows used to spend some time in the semi-circular area, at the time they created by some statues. In the second century, the Crypta was transformed into a latrine the spectators of the theatre used as a waiting area or a vestibule.

The Crypta Balbi in the following centuries
The Crypta and the theatre were lately abandoned; in the 5th century, the area was moved into a dump where they are also used to bury dead people. Some centuries later, several remains were found on the floor of the Crypta, confirming the inglorious end of the former noble area. The strange management of the buildings makes people curious and shocked: some areas and their buildings lost importance and got abandoned in slow and inexorable transformation of Rome, from an ancient into a mediaeval city. Many spaces were transformed into dumps, losing their original function: however, we can say thanks to these dumps a whole age was rediscovered.
The scenario of the Crypta Balbi completely changed in the Medieval times; on the area, two churches were built: Santa Maria Domine Rosae, built in the central part of the garden, and San Lorenzo in Pallacinis, built on the former insulae. In the same period, a lime kiln was built: it was a furnace used to produce lime and to destroy the ancient monuments. You can still see the evidence is of a mediaeval hosteria, where you can still notice some part of the kitchen: the firebox position can be recognised thanks to the dark signs the fire left on the frescoes; if you pay attention, you can also discover where the marble counter was situated, where do used to serve food and drinks to the customers.
Skipping some time, you can get to the Second World War where a building of the 16th century had to be destroyed to build a new one. When the war started, the project to renovate this area of Via delle Botteghe Oscure was abandoned. The works had to restart after the end of the war, but several findings of Roman remains blocked the demolitions. It was decided to preserve the traces of ancient Rome allowing archaeologists to continue studying the site. It was the first step towards the idea of establishing the National Roman Museum. 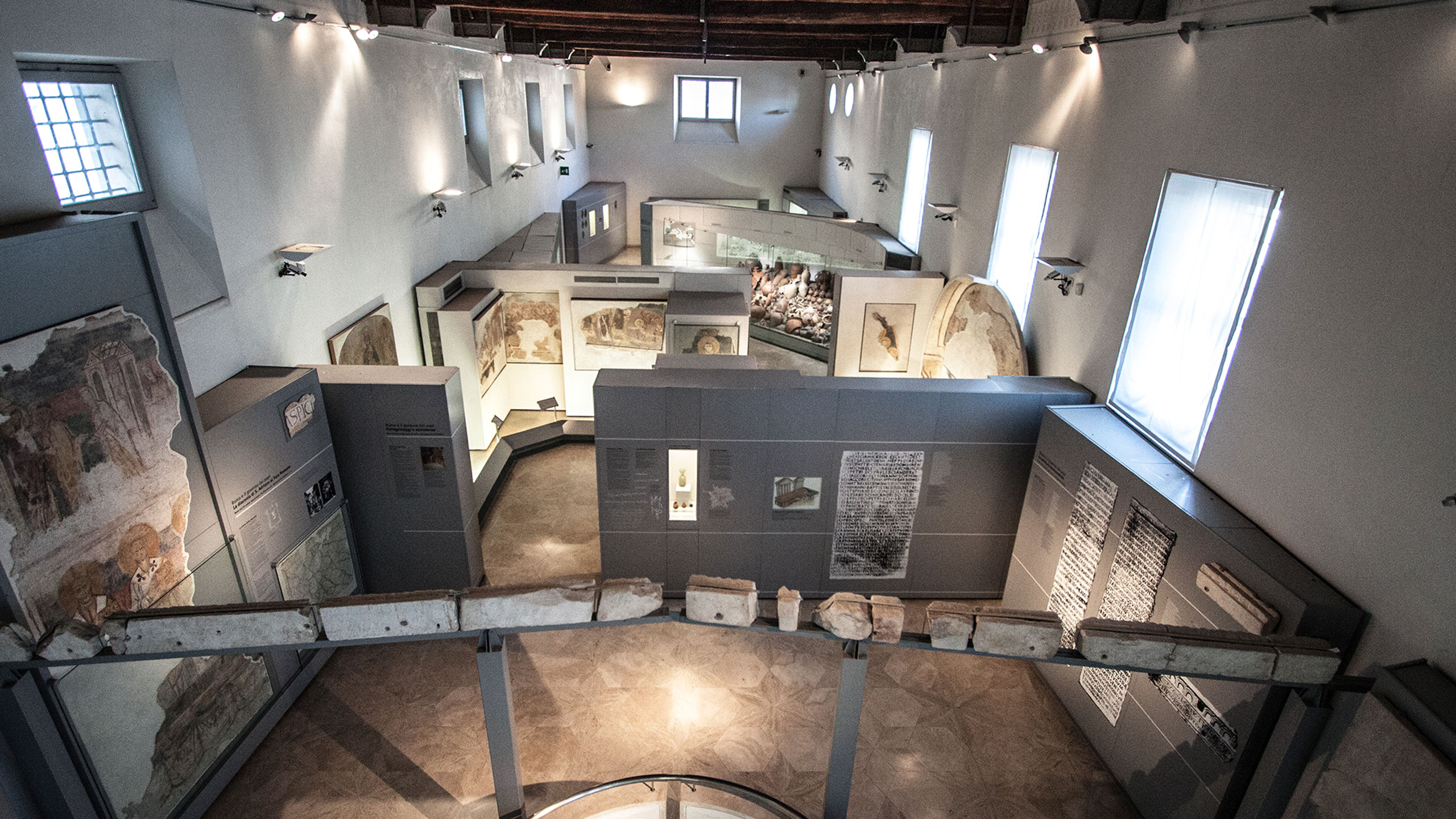 The Crypta Balbi today
Walking in the area of the Crypta and throughout the archaeological site, you can perceive the exact original location of the buildings; along the roads you will discover how they were arranged in the past. Furthermore, the National Roman Museum exhibits thousands of objects; you can admire up to 100,000 remains, some of them still perfectly preserved, made of various materials: ceramics, lead, glass and metal. There are also numerous ancient coins, at least 500, found over the years. The conditions of most coins are great; they date back to a period between the 7th and 13th century A.D.
The National Roman Museum, however, not only preserves the treasures of the Crypta but also other remains that helped archaeologists and historians to discover commercial practices and habits of some crucial periods of the past ages. You can admire historical collections of objects and artefacts found in Colle Oppio, on the Celio and in the Forums; the coins are the most important collections.
The value of the Crypta Balbi - as part of the National Roman Museum - consists in being a pole of urban archaeology that contributed to document the evolution of this area, along a very long historical period. It was possible to discover an important part of the daily life of people categories such as the artisans: tools and materials used for the construction of the products were actually found, in some cases beautifully preserved.
On the ground floor, you will find areas dedicated to the description of the commercial and artisan activities of the Roman times, in this small area of the city. Most of the findings describe activities such as metalworking, especially due to the presence of the Temple of Volcano, not far from there. On the second floor, you will find the evidences of some specific jobs, thanks to the study of the artefacts found there and their quality; they date back to a period between the 7th and 10th century A.D., from the post-classical era to the High Middle Ages. In that period, a new medieval city was developing itself. Visiting the museum and the Crypta, you will have the opportunity to discover how the ancient Rome disappeared becoming a mediaeval city.