Visiting Rome: the Tiber Island, stories and legends about the island surrounded by the water of the Tiber

You will surely know the Tiber Island, in the Tiber river in Rome, connected to the "mainland" by two bridges; but you perhaps don't know its history, its legends and the beauties you can't miss to admire at least once in your life.
Often simply called "Insula", it owes its name to the river that has hosted it for millennia: "tiber" actually is an ancient word used to indicate the Tiber river. Nowadays, it is the only urban island of the Tiber.

An island made of legends
The first legend concerns the birth of the island itself. According to the ancients people, the Tiber Island rose in about 510 BC, due to the accumulation of sheaves of wheat, thrown into the river by the Romans when the Tarquini were sent away from the empire. The city rebelled against King Tarquin the Superb and threw the corn collected in Campo Marzio away.
Obviously, the origins of the island are prior to this fact: according to recent studies, the central core is made of volcanic rocks where, over the centuries, several other debris transported by the Tiber got added during the floods.
There is also a second well-known legend, telling about its birth. This second myth would also explain its strange shape: if observed from above, the Tiber Island seems to be a ship. According to history, once upon a time, in 291 BC, because of a terrible epidemic in Rome, a ship sailed to Epidaurus, a city sacred to Asclepius, the Greek god of medicine, hoping to obtain aid and answers in a so critical moment.
Once landed in Epidaurus, they went to the temple of the Greek god and, during the propitiatory rites, an enormous snake appeared and went to hide itself inside the Roman ship. The ancients took it as a divine sign and thought that snake was the god Aesculapius himself.
Once back in Rome, the snake abandoned the ship and went to hide itself on the Tiber Island. Once again, the Romans took it as a divine sign: the snake-god shown them where to build a temple dedicated to Asclepius, lately inaugurated, in 289 BC .
To remember that miraculous event, the Roman people themselves gave the island the shape of a ship as it had brought god Aesculapius in the shape of a snake to Rome. 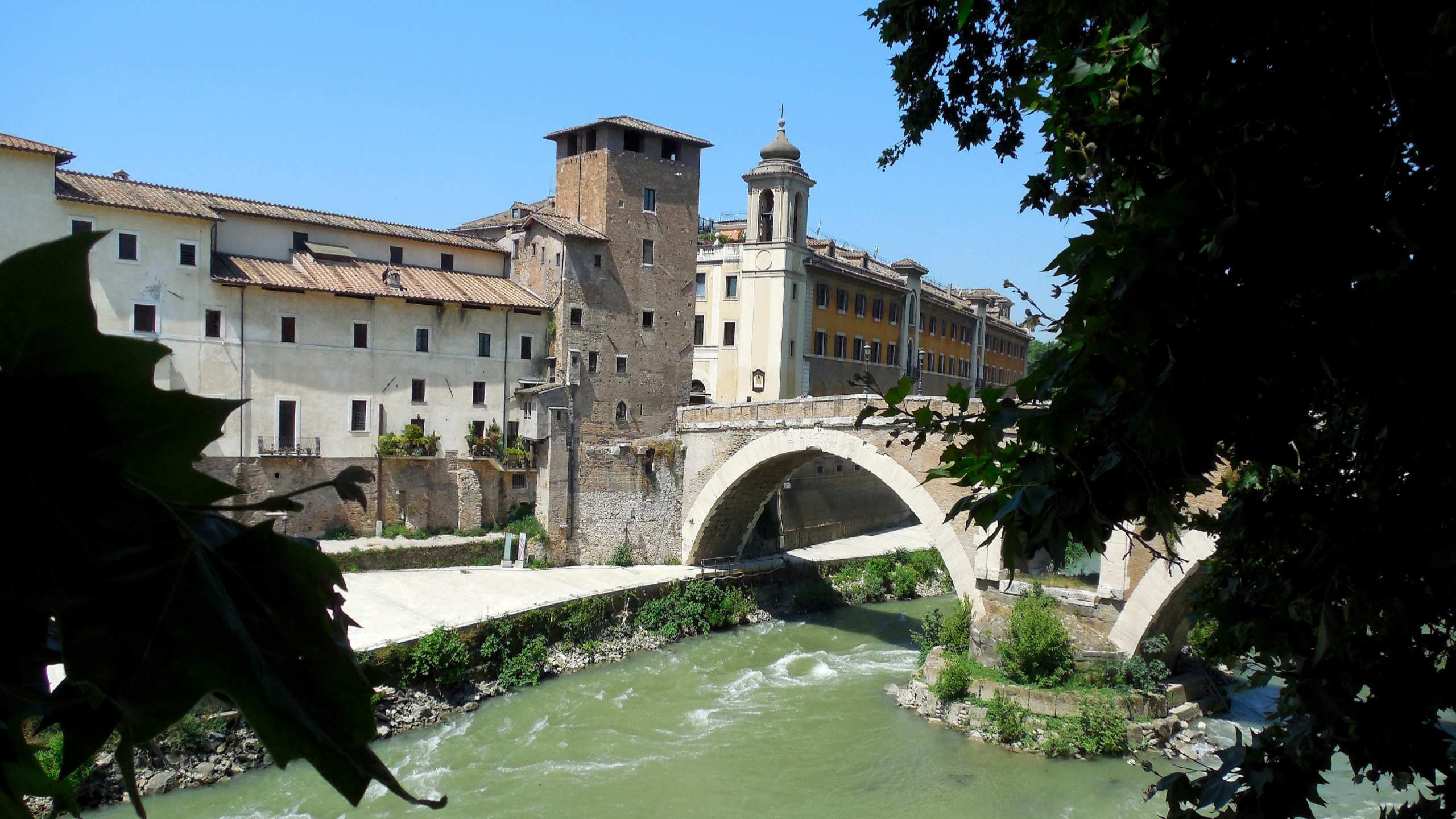 The infamous column
Like all legends, even the one concerning the Greek god Aesculapius has a basis of truth. From Roman times, the Tiber Island was used as a hospital, a place of mysterious and numerous recoveries. Even today, there are two hospitals there: the Israelite and the famous Fatebenefratelli.
The shape of a ship ofn the island is highlighted by the presence of a bow, a stern and, in the ancient times, there also was a mast as an obelisk. After it was destroyed, it was replaced by a column with a cross become famous in time as the "infamous column".
This name was due to its use: on August 24th of each year, a list of names of people who could not participate in the Eucharistic mass was posted on it. Those people were subjects with a questionable morality, bandits and, in general, in open conflict with the Church, or who had not followed the Easter precepts.
The infamous column had a bad end: it is said in the mid-1800s, a cart hit against it causing its break. Hard to say if it was a mistake or a voluntary act. Today, there is a monument commissioned by Pope Pius IX (1869), depicting the saints dear to the island: Saint Bartolomeo, Saint Paolino da Nola, Saint Francesco d'Assisi and Saint Giovanni di Dio.

The Basilica of Saint Bartolomeo
The temple built in Roman times to honour the god Aesculapius, is no longer visible today because the Basilica of Saint Bartolomeo was built above its remains.
The church was built at the behest of Emperor Otto III in the tenth century, to pay homage to the saints Adalbert, Paolino and Bartolomeo.
It was only after the restoration carried out by Pope Alexander III in 1180 that the basilica was entirely devoted to Saint Bartolomeo; inside, it is possible to admire different monuments and curiosities, the first is all the well, located in front of the steps of the transept. This ancient well has a relief depicting the three saints the church was dedicated to in the 10th century. On it, it is also reported an ancient Latin phrase, "Qui sitit ad fontem veniat potumquem salubre auriat ex vena", or "Let those who are thirsty come to the source and take a sip of health".
At the mouth of the well, the marks left by the chains used to lower the buckets and collect water from the well - considered miraculous for thousands of years - are also clearly visible. The fun fact about this well lies in its location: it is believed to have been built at the exact spot where the sacred source of the god Aesculapius gushed out, used for centuries to recover the sick people going to the island.
A second interesting element is the cannonball walled into the church wall. The history of this weapon dates back to the French siege of Rome in 1849. The building was full of worshipers praying when the church was hit by this cannonball.
Miraculously, the building did not suffer too much damage and no one was injured or killed by the attack. This led the faithful to believe in a miracle and to want to keep the cannonball inside the basilica.

The Fatebenefratelli hospital
This hospital is certainly among the most famous and well-known ones in Italy. When it was built, its management was entrusted to the Congregation of St. John of God, an order dedicated to a Portuguese friar who, in front of the hospital in Granada, used to call passers-by saying "Do well, brothers!", Thus inviting them to show the typical charity of Christians. It was therefore in his honour the hospital was named "Fatebenefratelli".

I Sacconi Rossi
The Venerable Confraternity of Devotees of Jesus Christ at Calvary and of Maria Santissima Addolorata, often called simply Sacconi Rossi, is a confraternity existed since the seventeenth century, whose task was to recover and give a proper burial to those who drowned in the Tiber claimed by none. This custom was interrupted, and then resumed in 1984: since then, on November 2nd, it is possible to watch a procession at night during which the adepts go to the Tiber to bless the waters and lay a wreath. If you have the chance, it is extremely suggestive to take part to this ceremony handed down for centuries.
The brotherhood also boasts an underground "decorated" crypt with the bones of the people who, over the centuries, have drowned in the Tiber.