If you are in Rome for a pleasure trip and you are art history passionate, you absolutely cannot miss a visit to the splendid National Etruscan Museum, a unique collection in the world relating to Etruscan and Faliscan cultures. The Museum is located inside the halls of Villa Giulia, a splendid 16th century residence located along the Viale delle Belle Arti, at the foot of the Parioli and a short distance from Via Flaminia, in an easily accessible area of the capital. Villa Giulia was built by Pope Julius III and used as a summer residence by the Pope himself, who loved to organize luxurious and sumptuous parties and receptions. It became property of the Kingdom of Italy in 1870, following the capture of Rome by the Italian army, then it was designated as a museum in1889.

The residence and its history
Villa Giulia stands on a plot that is only a small portion of the original property, which included three very large vineyards, some vegetable gardens and splendid Italian gardens. It was built at the behest of Pope Julius III, a great art lover, and cured in every detail by a large group of Italian artists, directed by Monsignor Pietro Giovanni Aliotti, Master of the Chamber of Julius III and bishop of Forlì. Following the death of Pope Julius III, the new Pope Paul IV Carafa decided to confiscate the properties brought together by his predecessor and assigned them to the most disparate uses. Therefore, the surrounding area was divided into many portions entrusted to the Apostolic Chamber and to the Borromeo family.
After a long period of neglect, in 1769, the building was restored by order of Pope Clement XIV and entrusted to the army, which used it as a warehouse and a lazaret; later, a veterinary school arose there, too. In 1870, the residence finally became property of the Italian state, and it was first assigned as a collection site for archaeological materials collected between the Tiber basin and the Cimini mountains, and then as an exhibition hall. In those years, numerous archaeological essays actually were in progress in the territory of Falerii, an ancient Etruscan city included in the Dodecapoli, located in the territory of Civita Castellana, in the current province of Viterbo. In the right courtyard of Villa Giulia, a daring reproduction of an ancient Etruscan temple was also made. In the lower part of the residence, there is the lodge designed by Bartolomeo Ammannati, facing on the first of the three terraces. The lodge is the access to the garden and the Nymphaeum, anciently used by the inhabitants of the residence to have lunch and dinner in the open air. This area of the building is organized on three levels, all covered by lodges decorated by balustrades and marble sculptures, around a great central fountain: this atmosphere was the freshest area of the house, because it was protected by the sun and, for this reason, often used for parties and receptions lasting entire days.
The beauty of the central fountain does not have any compeer: it was designed by Bartolomeo Ammannati and Giorgio Vasari, and it represents Caryatids and divinities of the rivers. Initially, the gardens of the residence were large cultivated fields, in perfect order and rich in fountains and sculptures. To reach the residence, the Pope's guests were carried by special boats from the Vatican. They were then moved to a private landing on the Tiber river, from where it was possible to walk up to the gardens and the Nymphaeum. This certainly was the best and most spectacular way to enjoy the magnificence and pleasures of the walking through its gardens until the lavish banquets set up inside the Nymphaeum. 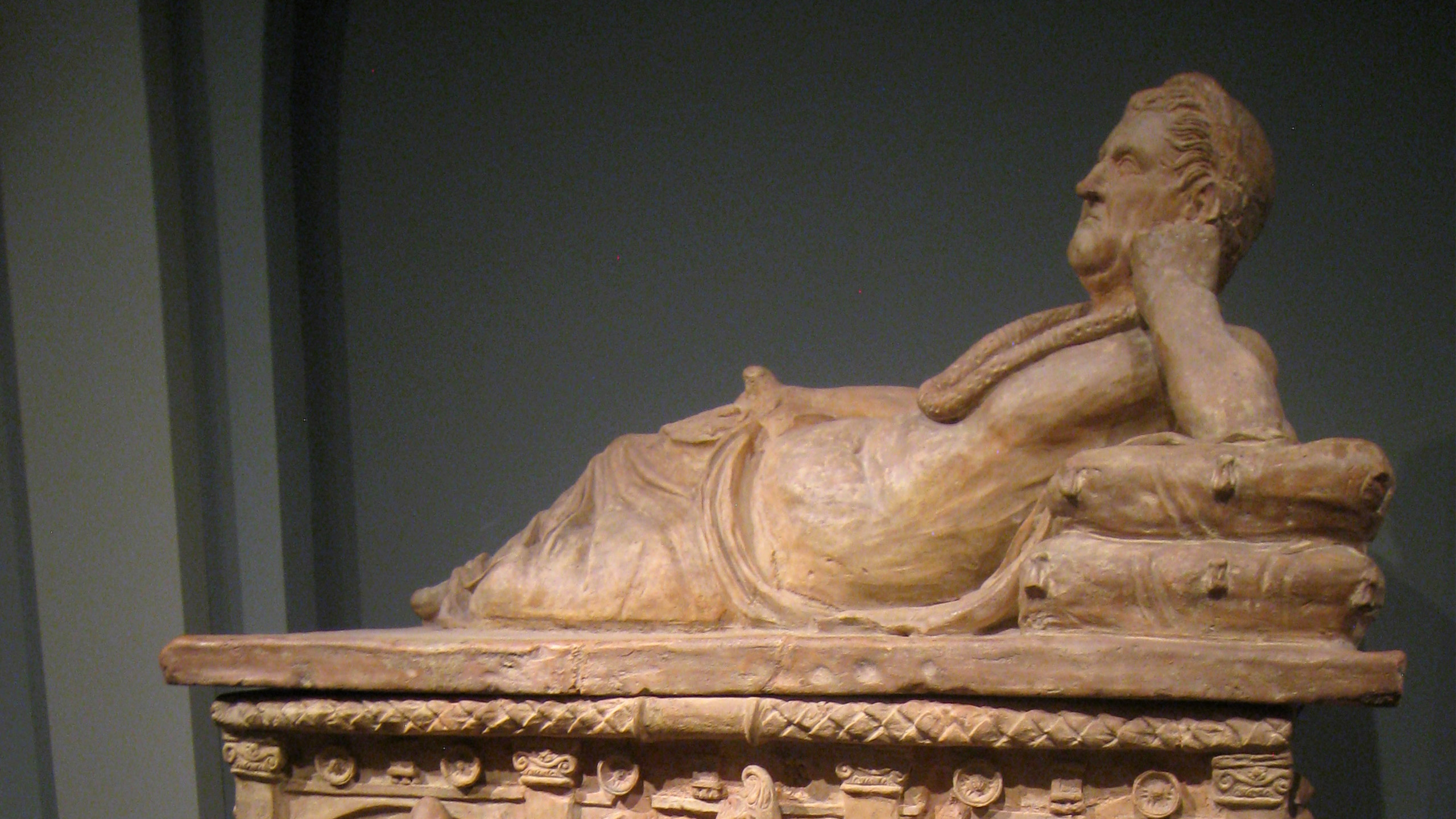 The Etruscan National Museum
Since 1889, the National Etruscan Museum is located inside the halls of Villa Giulia, the pope's ancient summer residence. The museum is entirely dedicated to the Faliscan and Etruscan civilizations and it collects all the pre-Roman antiquities of Lazio, Umbria and southern Etruria, dating back to the period between the 9th and 4th century B.C.
It is currently managed by the MIBACT. In December 2014, it became part of the museum cluster of the Lazio region. In 2012, the Museum expanded further, inaugurating some exhibition rooms in the nearby Villa Poniatowski, another historical and illustrious papal outbuilding. One of the most famous works kept inside the museum is the terracotta funerary monument known as Sarcophagus of the Spouses, which depicts a life-size man and a woman lying on a bed. The sculpture was found in the mid-nineteenth century, during the excavation of the necropolis of Banditaccia in Cerveteri, and its construction was dated back to the sixth century B.C. Among the other treasures kept in the museum rooms, there are the Lamine di Pyrgi, an ancient document engraved on sheets of gold foil, of enormous historical importance, as it allowed scholars to discover remarkable information about the history and language of the Etruscan people. It is one of the earliest epigraphic evidence in Italic language and it was found on July 8th, 1964, during an excavation campaign in the territory of Santa Severa, on the site of the ancient Etruscan foundation of Pyrgi.
The town was one of the ports of Caere (the ancient Cerveteri). The Apollo of Veio, on the other hand, is a sculpture in painted terracotta, from the end of the 6th century B.C. and attributable to the workshop of the famous Etruscan sculptor Vulca. It measures about 180 centimetres, and it undoubtedly is the work by an extremely skilled sculptor, who worked there between 510 and 490 B.C. Another piece of great importance is the Olpe Chigi, a polychrome ceramic made around 640 B.C. in Corinth, by a anonymous artist. The vase was found in Etruria, near Veio. It is considered one of the masterpieces of polychrome Proto-Corinthian painting, created in the moment of maximum splendour of Corinthian craftsmanship. The decorations adorning the vase show a continuous frieze with animals, the Corinthian theme par excellence. The historical and artistic importance of the National Etruscan Museum and the building that houses it will make the joy of any art and archaeology lover in the city.