Visiting Rome: the fascinating Stadium of Domitian under Piazza Navona

Rome and its monuments
Rome, is one of the most loved and appreciated cities by tourists from all over the world visiting the extraordinary beauties on its territory. Walking through the streets, you will be enchanted by its millenary monuments such as the famous Colosseum, the Pantheon, the Basilica of San Pietro and Castel Sant'Angelo but also by its architecture, with charming squares like Piazza di Spagna, Piazza Venezia and Piazza Fontana di Trevi.
Not everyone knows that, in addition to the sites of historical and cultural interest that can be admired on the city streets, there is a hidden world: the underground one. Rome actually preserves real treasures under the cobblestones of its pavement. Among the most important findings, there undoubtedly is the Stadium of Domitian located under Piazza Navona you can at least partly admire even today.

The Stadium of Domitian under Piazza Navona
If you are visiting Rome, you will surely have visited Piazza Navona; however, not everyone knows that the Domitian Stadium (UNESCO heritage), belonging to Domitian, the third emperor of the gens Flavia, is hidden under the square. This was the first and only one example of a masonry stadium of the Greco-Roman era, dedicated to sports such as boxing, running and wrestling. Observing it, you will discover that the square has the same shape: where once there were the stands, the current palaces have been built.
The fascinating remains in the underground are an excellent example of great preservation of archaeological findings. Some areas show the structure was very strong and made of materials of great quality, even if they were restored. In addition to this, it is important to know the area has been affected by works, urban changes and sometimes extreme atmospheric agents, reason why the resistance of the structure appears even more extraordinary.

History
The Stadium of Domitian, inspired by that of Augustus, was built by Domitian, between 85 A.D. and 86 A.D. in the Campo Marzio. The emperor actually wanted to create a place where people could celebrate and perform athletic competitions.
The architecture has a so-called circus shape: two parallel sides 265 metres per 106 metres, the short side is a semicircumference and the last one is oblique. The stadium could accommodate up to 30,000 spectators. Unlike the circus, the track had no divisions and there were no obelisks and goals defining it.
The original structure was restored during the 3rd century by Alessandro Severo and, for this reason, it was called Circus Alexandrinus until the Middle Ages. The activities inside the stadium lasted until the fifth century when it was used as a base for the built of other buildings. Subsequently, the first buildings were built during the Middle Ages and churches and palaces only later on, with the same materials used for the original stadium.
The underground area was progressively filled up due to collapses and floods of the Tiber, but the surface was never completely covered. In ancient times the flooring actually was about 5 metres lower than the current one. 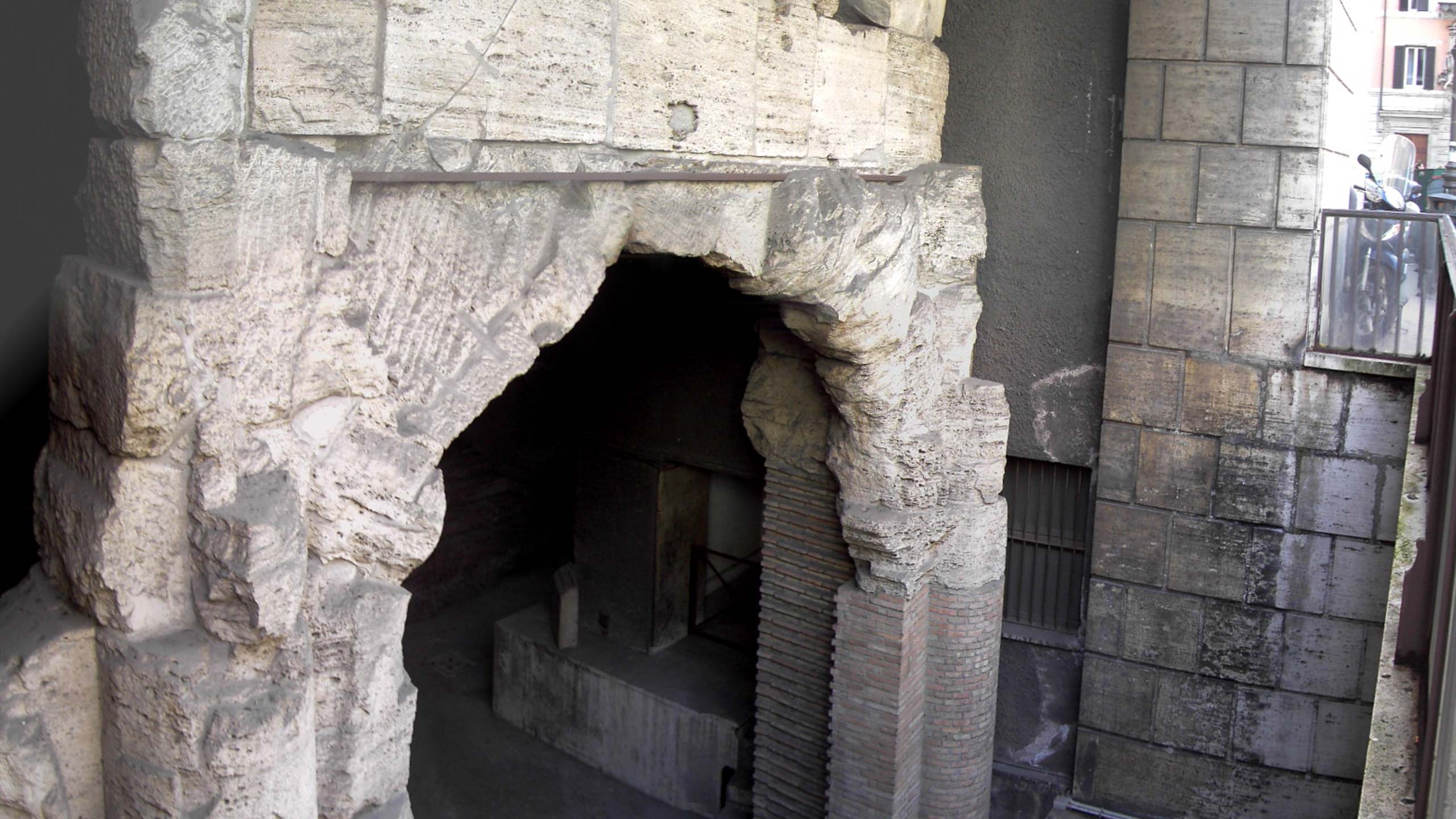 The excavations
During 1511, the first excavations of the crypts were carried out from where it was possible to extract richly decorated friezes with sculptures and some bases. So the circus provided very valuable building materials used for future constructions. Subsequently, also Pius IV requested the demolition of a section of a side - the one currently corresponding to Corso del Rinascimento near Palazzo Madama -, because he wanted to build his own Casino where the Vatican gardens were situated.
Other examples of reuse of the Stadium materials you can admire are undoubtedly those of Palazzo Pamphilj in Piazza Navona, Palazzo Braschi and the Church of San Nicola dei Lorenesi. During the modern age, in 1936, during some excavations involving the northern area of the building, a large section of the northern curve of the lower floor was discovered.
In addition to it, fine sculptures, masonry, stairs leading to the upper floors of the stands, pillars, etc. were found. Above this area, once the exhibits were removed, some palaces were built whereas, what was removed, was restored and made visitable by tourists. The Domitian Stadium under Piazza Navona, since 2014, has been entrusted to various private companies: they completely manage the archaeological area.

The Stadium of Domitian under Piazza Navona: today
If you are visiting Rome and you would like to discover the remains of the original circus, you can look out from the special glass opening on the pavement of Piazza di Tor Sanguigna, located 4 metres from the ruins illuminated by natural light entering by the cloister. From the same square, you can reach the underground area and observe the remains of the original building. From there, you will see arches almost in perfect conditions, supported by pillars and clay walls as the square above corresponds to what originally was the northern curve of the Stadium of Domitian.
In the underground area, you can also admire the staircases that led to the upper orders of the stands and, in some specific areas, it is possible to admire the stucco that covered some parts of the stadium. If you wish to see other findings from the Stadium of Domitian, you can visit the church of S. Agnese in Agone. This religious architecture was initially built in a basin belonging to the stadium, right among the ruins, where one of the main entrances was situated. The remains are not fully accessible by tourists because, part of the ruins of the building have been covered by the buildings overlooking Piazza Navona. However, some are kept in the cellars of the houses built right above it.