Visiting Rome: the rich collection of Palazzo Barberini, home of the National Gallery of Ancient Art

Palazzo Barberini
Palazzo Barberini, located in via Quattro Fontane, a few steps from Piazza Barberini in Rome, is the seat of the National Gallery of Ancient Art and the Italian Institute of Numismatics. The building was erected between 1625 and 1633, at the behest of Pope Urban VIII, to expand the palace owned by the Sforza family. The project was led by Carlo Maderno in cooperation with Francesco Borromini. However, during the construction, in 1629, Maderno died and the direction passed to Bernini, but Francesco Borromini still continued to work on the design. The latter actually owes some structural and decorative details such as the spiral staircase located in the western area of the building.
The original plan dictated, as mentioned, the annexation of the palace of the Sforza family using the system of the Renaissance buildings. Indeed, Maderno had designed a quadrangular building with an area surrounded by arches in the centre. However, later on, the architect modified the project to adapt it to the style of the time and, above all, to combine the concept of "city palace" with that of "residence". The facade, therefore, became simpler and more austere but a large space was dedicated to the gardens. The project took inspiration from Villa Farnesina.
The facade, therefore, has seven spans over three floors, enriched by arches supported by Doric, Ionic and Corinthian columns. As for the interiors, the ground floor has an elliptical atrium from where three staircases - two lateral and a central one - branch out. The latter leads to the gardens, located on a mezzanine floor. The garden originally corresponded to the idea of Maderno to join a residence with a city palace, and therefore it was a real park. The area actually included part of the Pia road, currently Via XX Settembre, and part of what is now the climb of San Nicola da Tolentino. They chose the style of the Italian gardens.
However, towards the end of the eighteenth century, the park was enriched by tree-lined areas, typical of the English gardens. Later on, during the early 1800s, in 1814, a Sphaeristerium was built in the area of the garden adjacent to Via Quattro Fontane and Strada Pia: it was a sports facility, open to the public until 1881, when the urbanization process involved the land where the building was located and therefore, the adjoining park.
In 1895, the gallery was created to collecti numerous works of art from different collections and from the Monte di Pietà. Within its walls, there actually were masterpieces belonging to Filippo Lippi, Raffaello, Tiziano, Tintoretto, El Greco, Holbein, Caravaggio, Guido Reni and Guercino. Over the years, the collection considerably expanded despite the numerous finds already dispersed in the 1700s. However, a Royal Decree of April 26th, 1934, abolished the constraint of the commission substitution and numerous works were sold and therefore disseminated in Europe and in the United States, where art lovers and collectors hurried to buy them. This operation brought works of exceptional value such as the "Twelve years old Christ among the doctors" by Dürer, "Saint Catherine from Alessandria" and "I bari" by Caravaggio far from Italy and Palazzo Barberini. This event, however, shook consciences and artists so much that they asked to press on new regulations to protect artistic heritage. The palace, which remained property of the Barberini family until 1949, was officially purchased by the Italian State to expand the headquarters of Palazzo Corsini alla Lungara and to adequately place all the masterpieces of the collection. However, only in 2006 the palace was completely assigned to the Ancient Art Gallery which needed larger spaces to display all its works. 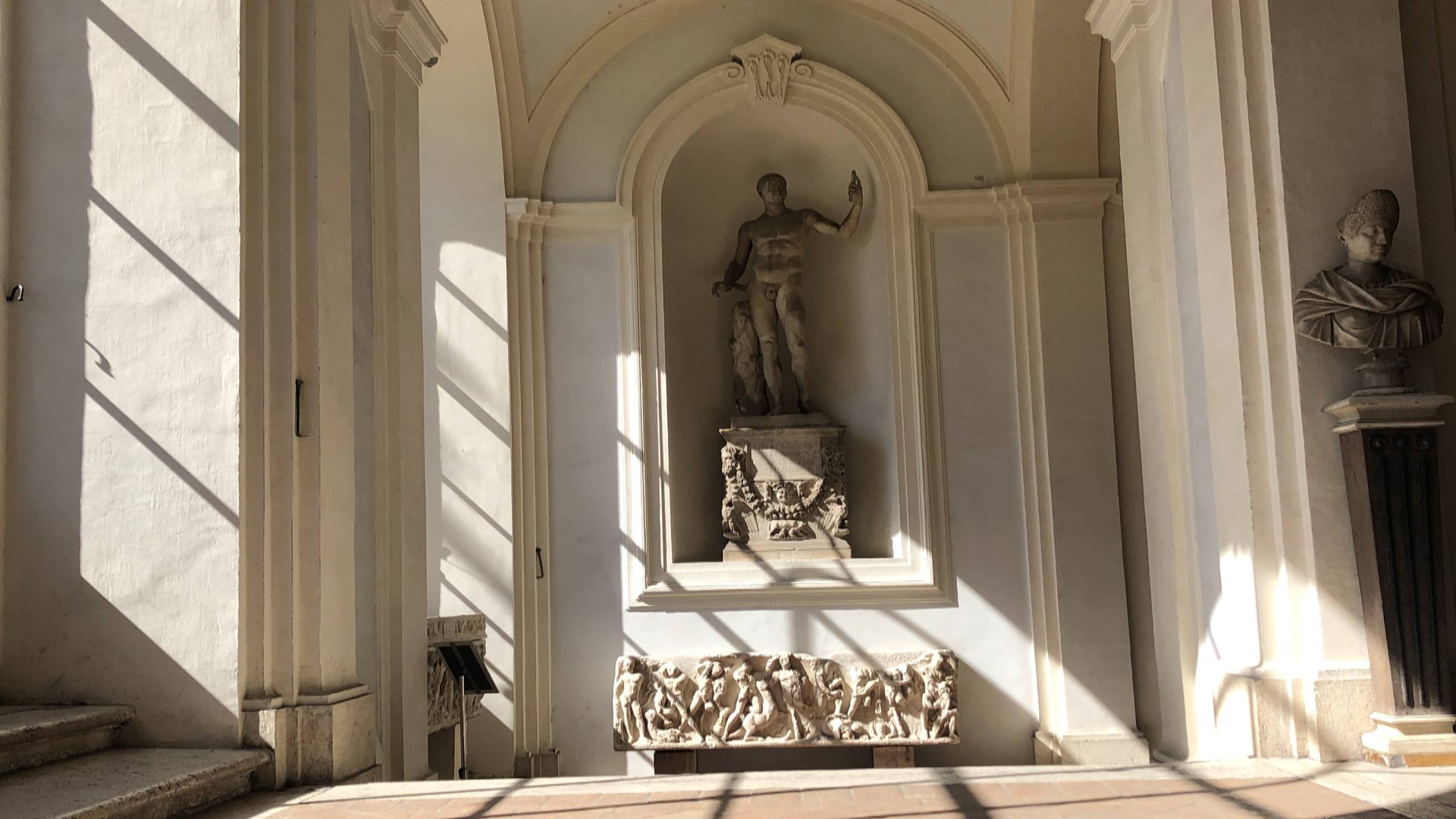