A few kilometres from Rome, two words to the South-East of the city, you will find the famous Castelli Romani: their fresh climate during the summer, the good wine, and the several festivals set around the wonderful lakes and elegant parks attract many Roman citizens and tourists, too. From Frascati to Marino thanks to the good wine, from Castel Gandolfo and its beautiful lake to Ariccia and its famous "porchetta", from Nemi and its tasty strawberries to Genzano and its famous bread: all the little towns situated there deserves a visit, departing from Frascati

Frascati and its history
The first little town you find along Via Tuscolana is Frascati. Situated on the slopes of Monte Tuscolo, Frascati is situated around the rich and famous even abroad vineyards. Frascati is famous not only for the vineyards; it was an ancient city where the residence of Lucullus was situated in the Republican age, lately owned by Agrippina's husband - Nero's mother. In the Middle Ages, the little town was conquered and destroyed by the struggles of many Roman powerful families - such as the Colonna, followed by the Della Rovere, Farnese and Duke Stuart from York.
The Vatican City created the street from Rome to Frascati, in 1856: it was its first railway. During the Second World War, Frascati got victim of many damages, but it is now gaining a high position among the most important towns to be visited, because of its architectural and artistic heritage, and also because of its good food and wine, loved by Roman people and tourists, too.

Villa Aldobrandini
Villa Aldobrandini is the most monumental and famous one of the six parks near Frascati. These residences are called “Tuscolane”, because they are situated on the Tuscolo hill, and they were built by the papal families, between the 16th and 17th century. There are also other residences, such as Falconieri, Lancellotti, Sora, Tuscolana, Torlonia, and Rufinella; other two residences are situated in the area of Grottaferrata - Villa Grazioli and Villa Muti -, and other two of them in the area of Monte Porzio Catone - Villa Mondragone amnd Villa Parisi. Villa Aldobrandini is situated on the top of the park with the same name, in the main square of Frascati.
It was also known as Villa Belvedere, just because of its location, from where you could dominate Frascati, and see Rome.
In 1550, Monsignor Alessandro Rufini built a little residence on the remains of an ancient Roman house. It was sold for his debts, and bought by the Apostolic Chamber. Pope Clemente VIII gave it to his nephew Pietro Aldobrandini, to thank him for having saved Ferrara, in 1598. 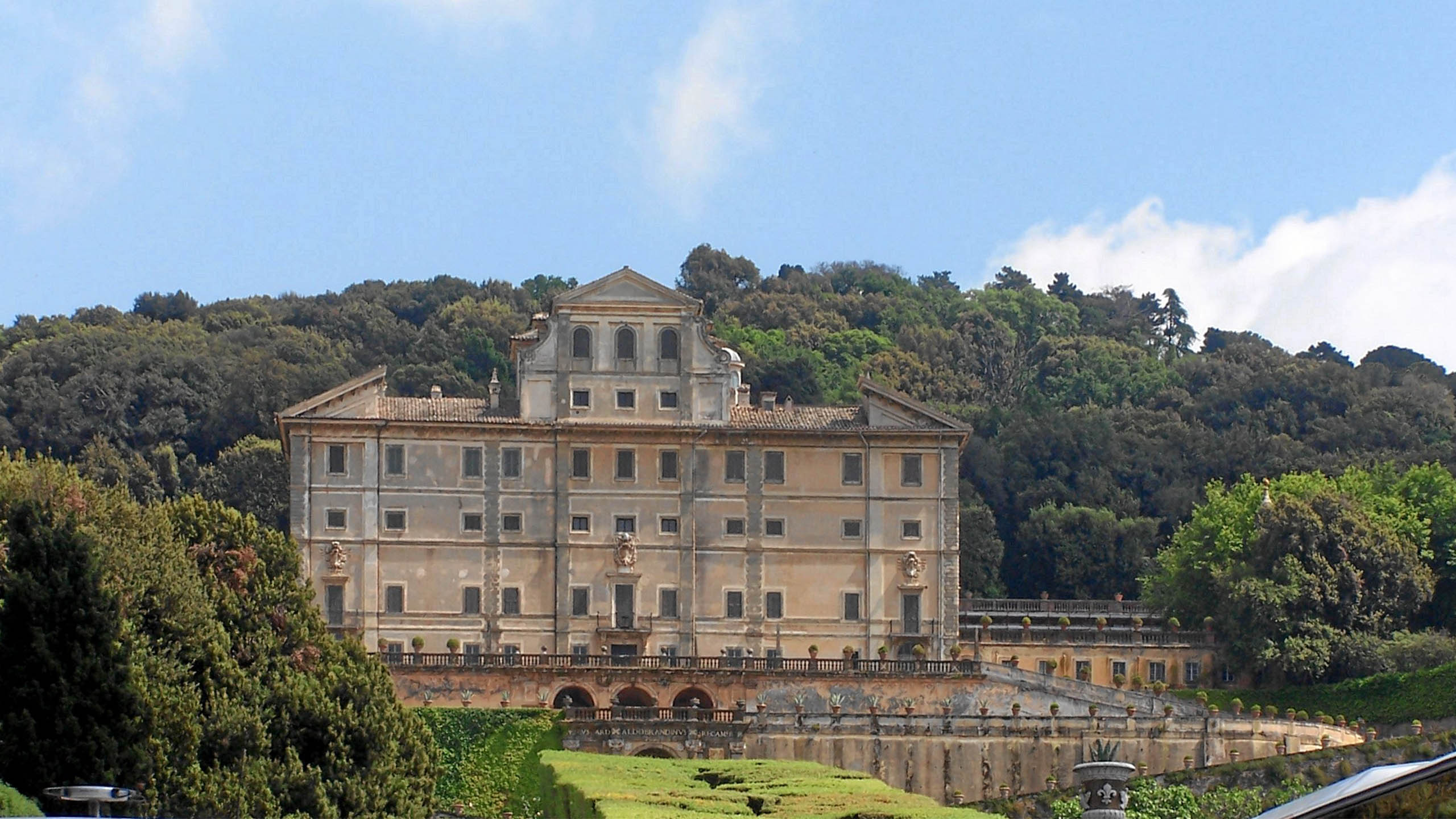 Pietro Aldobrandini commissioned Giacomo Della Porta to completely renovate the house, to make it a representative building. Carlo Maderno and Giovanni Fontana lately restyled the gardens and the fountains, together with the Teatro delle acque, setting some water games not working anymore, unfortunately. In 1683 the Aldobrandini family sold the Villa to Pamphili's family, and it became property over the Borghese family, in 1716. In 1837, the Aldobrandini finally regained the house, still their property.

What to visit
Frascati doesn't have only Villa Aldobrandini; some Peter's Cathedral is very beautiful: it was designed by Mascherino, then finished by Fontana in 1598; the Chiesa del Gesù and its false dome by Andrea Pozzo, remember the famous Chiesa di Sant’Ignazio, in Rome. Also the Museo Civico is very interesting because of the Remains from the ancient Tusculum - an ancient city from the pre-roman age. You can't miss the Scuderie Aldobrandini : they are the cultural centre of the Museo Tuscolano.
On the first floor, you can find temporary exhibitions and conferences, and on the ground floor, you can see the museum.

The wine
Frascati DOC is a wine the Roman citizens love so much, but it is very peculiar because it was loved by The Royal British family too, and about 80 years ago, it became one of the wines drunk in Buckingham Palace, where the best wines from all over the world are stored. Its origins probably date back to the era of the Imperial Rome.
It is a pale wine, with a delicate flavor; there are different types of it: dry, sweet, and Novello. Its etymology - and so the name of the wine itself - comes from the term "frasca", that was a little branch the waiters used to put out of the door of their "hosteria"; that's whthe reason of the names "fraschetta" and "frascati", for the wine and the city.
You can't miss a visit to the famous "fraschette", a tasty and folkloristic tour. Taverns and cellars are always full, in a jovial atmosphere, chaos and Roman songs to taste memorable dishes:
- Sandwiches with the best of local cold cuts, Porchetta di Ariccia IGP, Castellino salami , with Larian and Genzano bread;
- The Roman tradition first courses, such as cacio e pepe, or pasta with Roman broccoli; - Fresh and aged cheese, toasted bread, olive oil, jams and honey;
- Hot dishes, such as the famous white and red polenta, and local bread.

You will find the "fraschette" in any town of the area, in Ariccia, Castelgandolfo, and Marino. The most important festival takes place in Marino: it is the Grapes Festival, taking place not far from Frascati: we suggest you to visit during the first weekend of October, if you are there.
It started in 1925, together with the Festival of Madonna del Rosario, celebrated to commemorate the victory of the Holy Alliance, against the Ottoman Empire, in Lepanto, on October 7th, 1571. The main feature of the festival in Marino is the miracle of the wine: the fountains drop off wine, instead of water.

Sweets
Concerning sweets, you will find many typical products, such as the wine donuts, the newlyweds donut from Rocca di Papa, and the "pupazza frascatana". The "pupazza frascatana" is a typical dessert from Frascati; in the past, they used to produce it only during the Christmas holidays, but now they sell it all over the year.
It is a biscuit made with extra virgin olive oil, flour, orange essence and honey - sometimes it can contain also cocoa and cinnamon -, 25 centometres tall, representing a doll with three breasts. All these sweets have to be tasted, drinking a glass of sweet wine.
The when is the leitmotiv of the wonderful Castelli, hiding the landscape and architectural beauties that will leave you without breath.